The kidnapping of more than 250 girls from a secondary school in Chibok triggered international outrage.  The hashtag #bringbackourgirls started a campaign for their safe return and according to The Guardian newspaper, it was tweeted over a million times.
High profiles figures such as U.S. First Lady Michelle Obama, Pakistani education advocate Malala Yousafzai and even U.S. presidential candidate Hillary Clinton tweeted to support the cause.
About 50 schoolgirls managed to escape, but more than 200 girls still remain missing, according to the BBC.
In Nigeria, while some officials have been suggesting that the missing girls are a hoax, others were checking into claims by a young girl that she was one of the kidnapped Chibok students.
Last month local and international media were awash with stories of teenage would-be suicide bomber who was arrested in Cameroon alongside an accomplice, a woman in her thirties.
BBC reported that the girl – whose body was strapped with explosives – was arrested in Limani by local self-defense forces.

A frequent target of bombings in recent times, Limani is situated on Cameroon’s northern border with Nigeria.
The girl claimed that she was one of the missing schoolgirls abducted by the terrorist group Boko Haram in the town of Chibok in the northeastern state of Borno on April 14, 2014.
In a statement on his Facebook page, Garba Shehu, the spokesman of President Muhammadu Buhari, said the Murtala Muhammed Foundation would partner with government and parents from Chibok to verify the identity of the girl.
The NGO later announced that the girl was not part of the missing schoolgirls, saying her photographs “do not fit the description of any of the missing daughters from Chibok,” Nigerian newspaper Vanguard reported.
According to Vanguard, the NGO’s chief Aisha Muhammed-Oyebode said the government had told her group that the girl identified herself as a 12-year-old who is originally from Bama – about 60km away from Maidugiri, the capital of Borno state in Nigeria. Bama was overrun by the insurgents last year.
Some people believe that Boko Haram is using these schoolgirls alongside other girls they kidnapped to carry out bombings.
In truth, teenage girls have been committing most of the recent suicide bombings in northeastern Nigeria.
The February attack on Dikwa camp about 85km northeast of Maiduguri lends credence to this belief.
BBC’s Anne Soy recounted how three girls were sent to detonate their explosives at the Dikwa camp, which houses about 50,000 refugees. But one of the girls refused and escaped to tell her family and others in the camp of their plan.

But before she could get to the camp, the other girls had detonated their explosives, killing 58 people. 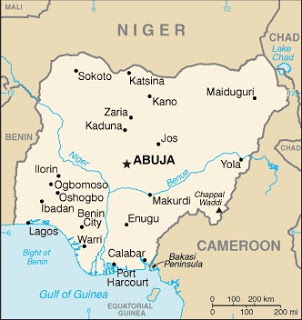 “I don’t know if the other girls knew they would die when they went on the mission,” the girl who escaped told Soy.
She also said she’d still like to get an education.
Amnesty International said that at least 2,000 women and girls have been abducted by the terrorist group since the start of 2014.
The terrorist group Boko Haram started its military operations in 2009. In the Hausa language, which is predominantly spoken in northern Nigeria, Boko Haram means, “western education is forbidden.”
Many Nigerians are less concerned with the Chibok girls than with politics or the economy. People talk less and less about them because the controversies surrounding their disappearance create doubts and many unanswered questions.
Some Nigerians feel that Buhari’s party, the All Progressive Congress, used the situation for their own advantage, especially as Buahri went on to defeat Nigerian former President Goodluck Jonathan.
Jonathan’s People’s Democratic Party had been at the helm since 1999.
Some people who share this belief think the Chibok issue is a hoax and a calculated attempt to belittle Jonathan’s leadership ability. More worrying is the belief that the opposition made up the story to gain nothing but political power.
Lending his voice to that theory, the governor of Ekiti state, Ayodele Fayose was quoted by The Punch newspaper saying: “I don’t know if there are missing girls but no indication has shown that. It is a political strategy, because I don’t think any girl is missing. If they are missing, let them find them.”
Jonathan, the former president, was criticized and characterized as weak and ineffective in rescuing the girls and addressing the insurgency.
Buhari, his successor, has promised to tackle the insurgency and find the schoolgirls.
Although Buhari had ordered an investigation into the kidnapping in January, he bluntly admitted that he had no information about the girls’ whereabouts.
The Nigerian military has raided the hideouts of the insurgents, destroying their camps and saving women and children kidnapped by the terrorists.
The government has continued to deny media reports that the terrorists are demanding a $50 million ransom to release the girls.

***
Your tax-deductible contribution helps students
supported by this organization. Thank you for being generous.
www.HelpYJI.org