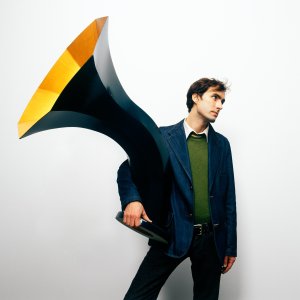 NORTHHAMPTON, Mass., U.S.A. – It takes a lot for a single performer to captivate an entire room of people. Singer and multi-instrumentalist Andrew Bird managed to do this in Northampton’s Calvin Theater last Friday.
The term “multi-instrumentalist” is often used generously for anyone who can fumble with more than one musical tool.
Bird is the counterexample of this. He is a violin virtuoso, as well as a proficient guitar player and whistler.
Bird opened with “Why?” alternating between swelling fluid violin lines and detached pizzicato pieces, and yearning mezzo vocals.
The performer, clothed in a full suit, was on stage surrounded by four large phonographs, from which his sounds were amplified, and a looping system.
The freedom of being solo on stage created leeway for experimentation.
After an audience member requested “Glass Figurine,” Bird responded that he hadn’t played the song in a few years.
He played the tune anyway, asking the audience where he was supposed to go after the bridge. The crowd accepted Bird’s trials, cheering and laughing along with him.
The Calvin was perfect for Bird.
The medium-sized venue possesses the feel of an old-time theater, with ornate walls and multiple floors. Its classical design and modern touches (posters on the walls for They Might Be Giants and The Black Crowes) were an even complement to Bird’s musical style.
Canadian singer-songwriter Sandro Perri opened the show.
Perri played his mellow folkie-rock songs alone on stage, playing both the guitar and bass lines on his guitar, and the bass drum with his foot.

Leah Igdalsky is a Junior Reporter for Youth Journalism International.