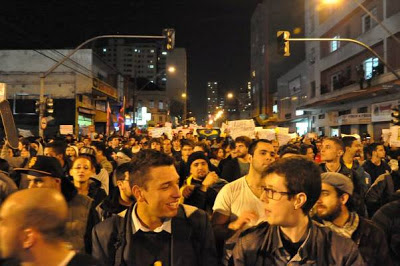 Hundreds of protesters in Curitiba took to the streets June 18. (Pamela Castilho Cohene/YJI)

CURITIBA, Paraná, Brazil – In recent weeks, the eyes of the world have been on Brazil, the stage of many protests, and the nation hosting some of the world’s top upcoming sporting events, including next year’s World Cup.

Earlier this month, just days before the June15 beginning of the Confederations Cup, the city of São Paulo saw five protests against an increase in the bus fare from R$ 3,00 (approximately USD $1.39) to R$ 3,20 (approximately USD $1.49).
Last week, the capital of the state of São Paulo hosted one more protest, which was peaceful. Many people have been hurt and many more arrested. 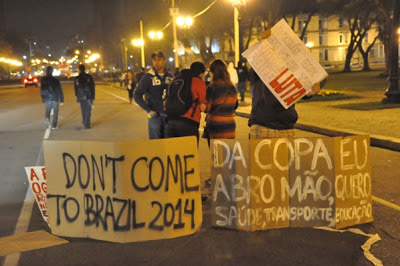 “I was slapped on the face a few times without a need. I didn’t say a word to them any time or said something offensive. They didn’t hurt me physically, only morally,” Guarani said. “The treatment was truculent. We were trapped and they arrived shooting, pointing guns, cursing and hitting, totally unnecessary. When we asked why they were arresting us, they called us vandals and said that we had plundered and insulted them.”
Hernandez posted a full account of what happened the day he went to the protest in São Paulo on social networks:
“… Next to me, there were more like 20 people, all trying to recover from the bomb effects. Some felt really sick, but everyone was helping themselves. There, quiets, we saw the march pass, we heard the bomb noises going to an end and we saw that white smoke master everything. “Phew, it was over.” It was just wait, fully recover from all the burning and go away, each one to their ways. Silly mistake! The police came up, looked at us, brandished their weapons and went where we were, shouting, “Tramp, take the cloth out of your face!” I took a slap. “Take off your hat,” and another slap. They made us kneel down, searched our backpacks, searched us, lined us up and put us inside a police car. Yes, we were arrested! “For what?” I asked, but they didn’t answer. “For what?” asked a tall man wearing a two-piece suit with his mobile recording everything. He was handcuffed and arrested. He stayed beside me in the police car. A girl was feeling really bad, asthmatic without her pump and nervous, she was having an asthma attack, but she was arrested with us…”
In the interview, Hernandez said he found out about the protests on the internet June 18.
“What I saw on Tuesday was quite disgusting and I couldn’t stay at home anymore. I needed to see for myself, I needed to be there. I was scared. My cousin had called me and told me she had dreamed with me running, fleeing like a war. She constantly told me not to go, but I felt that I had to go and I went. And what is on the text [posted on the social networks] happened.”

The country gets united

Stories like the one Hernandez tells spread quickly on the internet and caused commotion in several Brazilian cities.
In the city of Curitiba, protesters came out several times in support of São Paulo.
A peaceful protest on June 14 drew 700 people. Leaving the historic section of Boca Maldita and walking until the Iguaçu Palace, protesters held signs and chanted shouts of support for São Paulo.

Hugo Juliano, one of the organizers of the movement in Curitiba, said the number of protesters grew online, with many taking part through a Facebook event created just a day earlier. 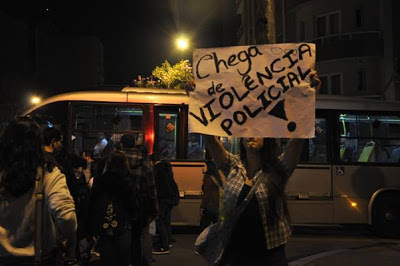 “We understand that the movement is peaceful. The movement articulates itself to be peaceful,” Juliano said. “We have the same purpose of fighting and defense against the fare and mainly against the government repression. The movements are coming together today, not only here in Curitiba, but in Brazil and worldwide. This is a fight for citizenship and the government representation by the people. The fight is a re-occupation, it’s a re-discussion of democracy.”

Mirelle Camargo, 20, a student who attended the June 14 protest in Curitiba, said that during the walk she was called a vandal by a motorist.

“We were there protesting at the entrance of the Marechal Deodoro (a street of the city) and when we found cars with our posters, a man opened the car window and said, ‘This isn’t citizenship, it’s vandalism’ to me. Then, I put my poster up, which said, ‘We are citizens too.’ We also have rights,” she said.
“I think that São Paulo was a landmark for these awakening,” Camargo continued. “I hope that it continues to happen because the people in Curitiba are very conservative. We have to show that we still have face, that we have the power to speak up and ask for our rights, that we can still influence public decisions because we have power.”

Camargo said people who came to the June 14 demonstration in Curitiba left what they were doing and joined together.

“We stopped the traffic, many people saw, many people supported the same way as many people were against it. But it is like this, this is democracy, people can give their opinion, it’s the people being able to govern,” she said. 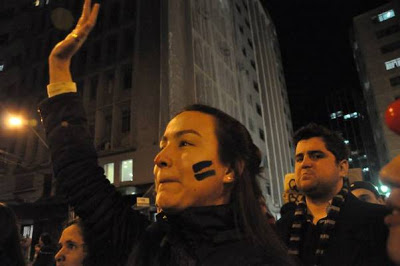 Social networks and the movement

Facebook users flocked to the Curitiba event page by the thousands – the São Paulo event page showed many more than that – and the numbers prompted organizers to warn protesters to be careful.
“ATTENTION ALL OF THE CURITIBA PROTESTERS: the last two acts didn’t have police presence and they were peaceful,” the organizers posted. “It’s possible that this time we have the police presence, but even so we’re going to keep the peace and cherish for the welfare of everybody WITHOUT VIOLENCE. And here comes the message: “Mr. Cop, come participate not ravish!”
Through social networks in Brazil, people shared photos, videos and other information in support of the movement and advice to anyone going to a future demonstration.
All kinds of people, many of them students, took to the streets June 17 in Curitiba, where bus fares also went up from R$2,60 (about USD $1.20) to R$2,85 (about USD $1.31).
The number of participants varies, depending on who is asked, but the June 17 protest was peaceful until people arrived at the Iguaçu Palace when a small group of people tried to break into the place and started provoke the cops.
Most of the protesters were against this and chanted, “No vandalism.” Military police, who put the crowd at 10,000 people, said it was almost completely orderly and peaceful, with nine arrests.
At the end of the protest, some people who were against the vandalism made a barrier in front of the Iguaçu Palace gate trying to stop the invasion. 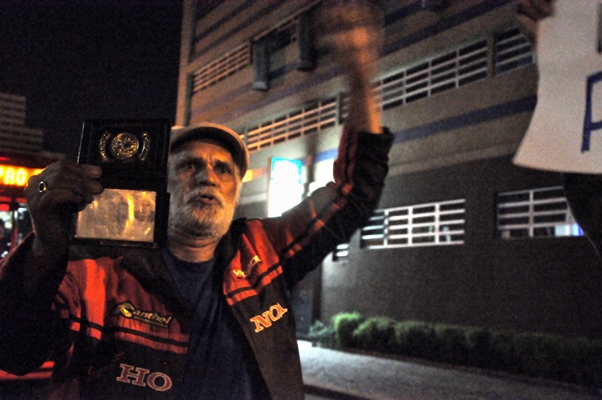 Protester João Tadeu holds up his documents for the crowd to see. (Pamela Castilho Cohene/YJI)

Brenon Fonseca, 18, a performing arts student living in Campo Largo, was one of the protesters. He came to Curitiba only to attend the protest.

“We started to talk to the riot police. We told them we were going to leave because the guys wanted to break into the place anyway and they would blame us. If they break into it, police would react and hit us. So we told them we were in peace and trying to hold on but we couldn’t. Then, me and my friends left. The guys wanted to break into the place and they were crazy. The riot police was cool and they were talking calmly. They just told that if they broke into the place, they were going to react,” he said.
João Tadeu is a retired guard who attended the protest and touched many in the crowd with his angry speech.
“I earn way less than minimum wage,” said Tadeu, who showed documents and working papers. “I worked my whole life for this? It’s not fair! I have three granddaughters and I can’t even afford school supplies for them! The public transport is also a shame, we work full day and got to go back home tight, upright and in a bad condition. We have to protest.”
As they passed by him, protesters cheered Tadeu, and some stopped to hear his speech. 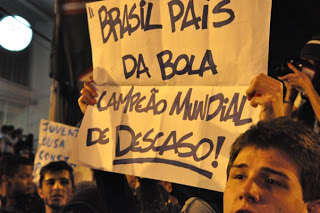 Protesters hold up a sign that says, “Brazil, the country of ball [soccer], champion of neglect.” (Pamela Castilho Cohene/YJI)

The protests June 20 and 21 were the most violent. Even in the rain, about 1,000 people, according to the military police, took to the streets.
The original intention of the organizers was that people stayed in one spot only, without walking. However, many were walking around the city, protesting against corruption.
Protesters were divided, with some people going back to Iguaçu’s Palace, while others went to the Arena da Baixada stadium, where three matches of the 2014 World Cup will be played.
The group that went to Iguacu’s Palace arrived around 8 p.m. at the Praça Santos Andrade, a small park in the city. About 200 students, who were waiting for the protest on the steps of the Federal University of Paraná met the protesters.

At that moment, protesters sang the national anthem in chorus. The movement then split again and most people went to the Iguaçu’s Palace, where tehre was a confrontation between police and protesters. 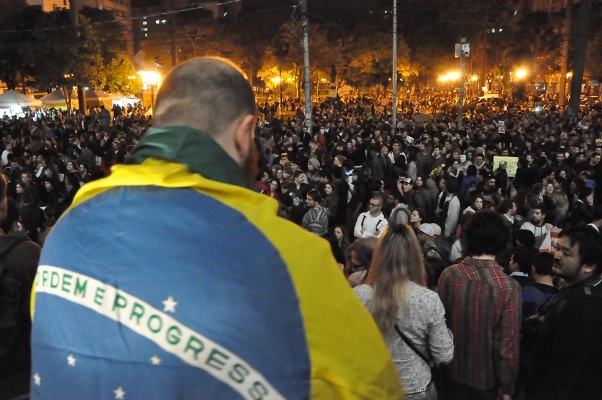 Rodrigo Resende, a student of Federal University of Paraná, at a June 18 protest, on the steps of the university. (Pamela Castilho Cohene/YJI)

Many protesters were disoriented and not know which way to run when the confusion started shortly after 9 p.m.

Vandals damaged bus stops and public buildings, including City Hall and the Court of Auditors.
Protesters who went to the stadium encountered “Os Fanáticos,” an organized group of supporters of the football team Atlético Paranaense.
A suspicion that other crowd, “Impéro,” – affiliated with the team Coritiba Football Club – would have infiltrated the protesters to incite them to vandalize the stadium, spurred conflict between the groups, who have a long history of rivalry.
The result was an altercation with firecrackers, stones and pieces of wood, and many people were scared and did not know where to run.
The confrontation, which began close to 8 p.m., went on for about an hour, only ending with the presence of the military police.
Though another protest was expected Saturday morning, people instead went to work in the streets, cleaning up the mess left by the vandals.
Translated from the original Portugese by Rafaela Guimarães. Pamela Castilho Cohene is a Reporter for Youth Journalism International.