Told in monologue form by Academy Award winner Olympia Dukakis, Rose is the story of a woman whose expansive life ranging from enduring the Warsaw Ghetto, where her husband and daughter died at the hands of Nazi soldiers, to her brief and emotional arrival in Palestine , to, finally; life in America . 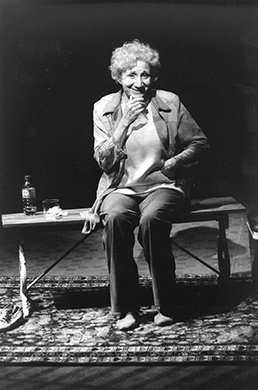 Comfortable and at ease onstage, Dukakis at times manages to enlighten the audience with humor while moments later bring their hearts to an emotional edge.

As the 80-year-old woman, Dukakis brings a sense of poise and dignity to the role.

The play, performed in a shortened version of its Broadway predecessor, is penned by Tony-nominated playwright Martin Sherman (The Boy From Oz) and uses events inspired by the life of his mother to create a compelling and realistic portrait of life and human nature.

The play opens with Rose’s detached description of a young girl’s shooting death. Rose then continues to describe her life as girl in Europe and what her family life was like, describing each member and their particular personalities.

After moving to live with her brother in Warsaw, Poland, she marries “the love of her life,” and soon gives birth to a daughter. Shortly after, she tells how the Nazi army invaded Poland and forced the Jewish inhabitants into the Warsaw ghetto, a place of little food and cramped spaces.

While working in a factory one day, Rose and the rest of the workers see smoke arriving from the ghetto walls and their worst fears are recognized as they return home to find their loved ones lying dead in the streets.

The play continues to present the compelling life story of a woman, at times sure of herself and other times feeling as if she is a complete outsider in the world she inhabits.

It’s a universal theme in today’s world. The emotion is raw and realistic, drawing compassion and pain for the character from the audience as Dukakis recounts the remarkable, yet ordinary story of a woman who sees her world changing, and the ideals she once held losing importance.

Presented on a bare stage, with only a bench and a few small props, the play is an interesting and dynamic story – thought-provoking and relevant.