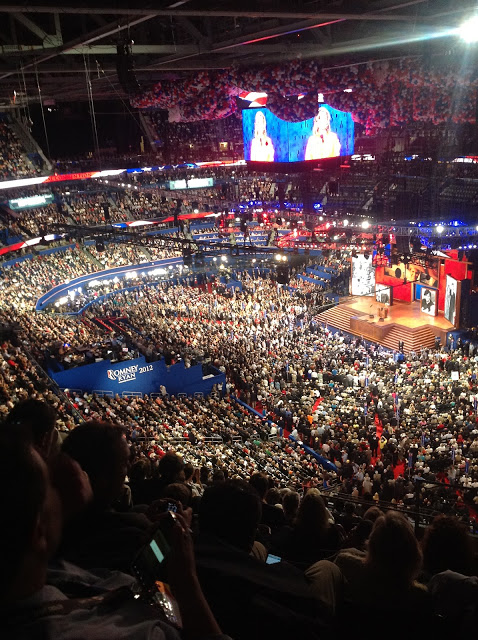 By Alli Hall
Junior
Reporter
Youth Journalism International
TAMPA,
Florida – Tuesday, my first full day at the Republican National Convention, was
a crazy day for a teenager. I woke up at 7:30 a.m. to go to a breakfast at 8:30
a.m., and from there went to a pro-life rally at the aquarium in Tampa to the convention
at the Tampa Bay Times Forum.
Although
it was crazy, it was a really great experience.

At
our morning breakfast, Wisconsin Gov. Scott Walker spoke to us.
From my
perspective, Walker is a really cool guy. He has done so much for his state
during his time as governor, so it was very exciting for me to meet someone I
have so much respect for.
Next
door, Herman Cain was the keynote speaker for another breakfast. I went over to
check it out, and ended up meeting the former presidential candidate and
getting a picture with him.
Cain
thinks it’s great that young people are getting involved in politics at such a
young age. After breakfast, I was invited to join a few people to attend a
pro-life  rally at the aquarium in
downtown Tampa.
Some
of the speakers at the rally included Congresswoman Michele Bachmann, Texas Gov.
Rick Perry, and former Pennsylvania Sen. Rick Santorum.
At the beginning of the rally, people just talked amongst each other and ate
lunch. My lunch consisted of sweet potatoes topped with spoonfuls of brown
sugar and approximately 20 marshmallows, and a gorgeous red velvet cupcake.
Yum, what kid doesn’t love marshmallows and cupcakes? What made the day even
better is we got to explore the aquarium. I saw a crocodile (full grown this
time), a little owl, otters, birds, and my most-feared creature EVER – sharks!
Although
the animals were very exciting to see, I did do one thing a little more
exciting: I met Rick Santorum! Unfortunately, I didn’t have much time to speak
with him, but meeting him made my day.
After the rally, I went and saw the new
movie, 2016: Obama’s America, by
Dinesh D’Souza. It was a fabulous movie, and I encourage everyone to go and see
it.
D’Souza
came at the end of the movie to answer questions and sign books. I bought my
mom a signed book, because she is a big fan of his work. After the movie, we
finally made our way to the convention.
Security
at the convention is very tight. There are police everywhere – on bikes, on
horses, in golf carts and on foot – and the whole Tampa Bay Times Forum, and a
few blocks surrounding it, is encircled with enormous fences. All the security
is to protect guests, delegates speakers, and media from angry protesters
outside.
Inside
the Tampa Bay Times Forum is great. There are decorations everywhere, all very
patriotic and the arena is huge.
I
even got the chance to go to the floor of the convention. The floor is where
the delegates from each state sit, and I got to watch some speeches from the
floor for a little while during the convention. Once I returned to my
designated seat – way up in the nose-bleed section – I settled down to listen
to some great speeches.
My
favorite speeches were by Santorum, Ann Romney, the wife of Mitt Romney, who will be the party’s nominee for president, and New Jersey Gov. Chris
Christie. I think the reason those speeches stood out the most for me is
because I’m a kid and listening to speeches about our economy and jobs doesn’t
really grab my interest, but those three spoke about more than that.
They
spoke about love, our family’s future, and coming together for this convention
because we want the most for our country. They believe that we have the ability
to do great things. Their speeches inspired me and gave me hope for my country.
Hope that has disappeared over the last four years is now slowly but surely
coming back to the citizens of this country.
Those
three speeches were the highlight of my night, and I’m looking forward to hearing
speeches from former Secretary of State Condoleezza Rice and Wisconsin
Congressman Paul Ryan, who is our party’s candidate for vice president.
An
update on the proposed rule change: For the rules, they have decided to allow
states to keep their caucuses. Although when delegates vote in the straw ballot
at the beginning of the caucuses, they are bound to that candidate for the rest
of the electoral process.
Many
people think this is a bad idea because people don’t know much about the
candidates at the beginning of the electoral process, when the caucuses take
place. To make them seal their vote to that candidate so early doesn’t give
them the chance to make a knowledgeable vote in the straw ballot.


YJI
Reporter Alli Hall, 15, of Duluth, Minnesota, is attending the Republican
National Convention with her mom, who is an alternate from Minnesota. Read all
of her dispatches and see all the photos at these links:
Part
One: The Grand Old Party Is Underway in Florida
Part
Three: Republican Convention: A Kid’s Point of View
Part
Four: Romney Speech Caps
Unforgettable Week