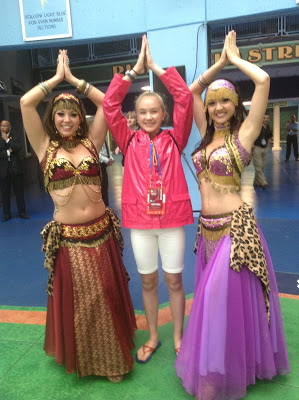 By Alli Hall
Junior Reporter
Youth Journalism International
TAMPA, Florida – RNC: to all those teenagers
and young adults who don’t know what the Republican National Convention is, I
hope by the end of the week you will.

Now underway in Tampa, Florida, the main
objectives of the Republican National Convention are to adopt a platform for
the presidential race reflecting the party’s goals and wishes for the next four
years and nominating our candidates for president and vice president of the
United States. This year, it’s expected that former Massachusetts Gov. Mitt
Romney will be the party’s pick for president with Wisconsin Congressman Paul
Ryan as his vice-president running mate.
Although that’s the main business of the
convention, it does involve much more.
There are many speeches made by
senators, governors, and other important political figures. Some speeches, such
as those by Romney, Ryan and Romney’s wife Ann Romney are anticipated by those
all around the nation, and even the world.
All conventions have something unique in
the building. Here at the Tampa Bay Times Forum, there is a national debt
clock, which is constantly ticking as our debt piles up. There is also a debt
clock that counts how much debt we will gain throughout the week of the
convention.
Republicans held the opening party for
the convention on Sunday night at Tropicana Field in St. Petersburg, Florida.
The stadium, home to the Tampa Bay Rays baseball team, was overflowing with
energetic and passionate delegates and guests from all around the country.
My favorite part was walking into the
stadium and seeing all the dancers, flamingos, and a little, itty-bitty baby
crocodile! I love animals, so seeing all the animals made it so much fun for
me.
At the party, it wasn’t really about politics; it was more about meeting
new people with very similar interests, and celebrating our country.
To end the party, Rodney Atkins, an
extremely popular American country singer, performed on a stage in the stadium.
His music boomed in the stadium and brought everyone together to, once again,
celebrate our amazing country.
Unfortunately, all convention events at
the Tampa Bay Times Forum on Monday were canceled due to tropical storm Isaac,
which is turning into a hurricane. The weather isn’t too bad here in Tampa –
there’s just off and on rain and lots of wind.
Even though the convention was cancelled
for the day, I still attended a breakfast for the Minnesota delegates – my mom
is an alternate – and their guests. We had two guest speakers, Congresswoman
Michele Bachmann from Minnesota and Professor Walter E. Block, who teaches at
Loyola University in New Orleans. It was very interesting to hear them speak
from different points of view.
We were also introduced to some possible
rule changes for the presidential election process in the future. One potential
change that really got people fired up was changing all state caucuses into
primaries. This upset many delegates, because they believe that caucusing gives
average citizens a voice in the presidential electoral process.
Delegates don’t want this to be taken away from them. Other than our breakfast, Monday was a very laid back day. I’m looking forward to the excitement of Tuesday.
YJI
Reporter Alli Hall, 15, of Duluth, Minnesota, is attending the Republican
National Convention with her mom, who is an alternate from Minnesota. Read all
of her dispatches and see all the photos at these links:
Part
Two: Candidates, Cupcakes Sweeten Convention
Part
Three: Republican Convention: A Kid’s Point of View
Part
Four: Romney Speech Caps
Unforgettable Week