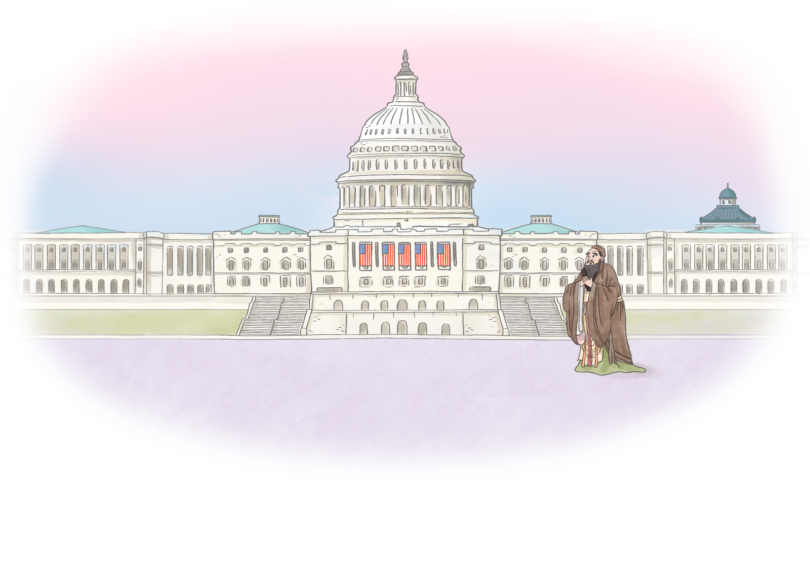 Andover, Massachusetts, U.S.A. – “There were four things the master had eliminated from himself: imposing his will, arbitrariness, stubbornness, and egotism,” said Confucius in The Analects. This quote came to mind as I watched rioters storm the Capitol on January 6, 2021.

I wondered if this was the “Great America” the Trump administration promised its supporters.

To truly “Make America Great Again,” would America have to eliminate the stubbornness and egotism from politics? And, I pondered, if Confucius were alive and witnessing America’s current political state, what advice would he give?

Confucius would condemn the actions of the Capitol rioters, as well as the conflation of personal and political interests, as they both conflict with his values of virtue and adherence to social roles.

A ruler should be virtuous instead of misusing power over his citizens, Confucius believed. He believed a ruler should strive to embody “ren,” a central Confucian concept meaning benevolence and care for others.

If the “wind,” the influence of a ruler, is good and virtuous, the ruler’s citizens also become more benevolent and inclined toward virtue. Similarly, if a ruler is unvirtuous, citizens tend to follow an unvirtuous path.

Confucius suggested that members of a society should act in accordance with their social roles. Specifically, Confucius believed rulers should embody all expectations of leadership — from political rule and virtuosity to strength and wisdom.

When asked about the ideal way of governing, Confucius said, “Let the lord be a true lord, the ministers true ministers, the fathers true fathers, and the sons true sons.”

According to Confucius, then, people behaving in ways that contradict their societal roles would lead to discord and unproductivity.

Government and society would then be most at peace when social order is clear and unwavering, and when a given ruler is transparent, honest, and virtuous.

Recent American political events contradict these tenets of Confucianism. President Donald Trump’s election falsehoods are rooted in egotism instead of virtue. And by resisting the democratic process in the wake of the 2020 election, he acted at odds with his shifting societal role.

Perhaps most significantly, a subset of citizens influenced by the “wind” of their unvirtuous ruler stormed the Capitol. These citizens, like Trump, did not fulfill the expectations dictated by social order. Rather than respect government proceedings, as citizens are expected to do, they chose to deface and defile the physical manifestation of American government.

It is likely that Confucius would rightfully condemn the recent actions of the Trump administration, as well as the political inefficiency and turmoil that resulted.

While it remains to be seen whether President Joe Biden will follow a Confucian path, he’s spoken about the importance of virtue and social roles. During his inauguration speech on January 20, Biden stated his intention to “rule virtuously.”

He also spoke to those who opposed his campaign and invoked the Capitol riot.

“If you still disagree, so be it,” Biden said. “Yet hear me clearly: Disagreement must not lead to disunion.”

That statement holds glimmers of Confucianism. Though citizens of modern America need not agree with everyone, they must respect others and the social roles that uphold American democracy.

If Biden governs “in harmony” with the crowd, he is more likely to be a successful and admired leader. Confucius said, “The noble man is in harmony but does not follow the crowd. The inferior man follows the crowd, but is not in harmony.”

Particularly at the height of the on-going covid-19 pandemic, Confucius might advise Biden to provide more substantial government aid to the suffering American people.

This is a critical step for Biden, not only so he can embody “ren” but also so the people’s faith in government can be restored.

As Confucius argued, if citizens lack faith in their rulers, “there is no standing for the state.”

Yet regardless of how much Biden practices “ren” in his presidency, we as citizens can still improve society by practicing “ren” ourselves. If each citizen acts virtuously and generously instead of selfishly, we have the power to eradicate injustice peacefully and in a bi-partisan way.

As poet Amanda Gorman said in her Inauguration Day poem: “We did not feel prepared to be the heirs/ of such a terrifying hour/ but within we found the power/ to author a new chapter/ to offer hope and laughter to ourselves.”

I am hopeful that our country will employ Confucian ideals to “build back” for a “better America.”

Erin Kim is a Reporter and Senior Illustrator with Youth Journalism International.

Erin Kim is a Reporter and Senior Illustrator with Youth Journalism International from Massachusetts, U.S.A.