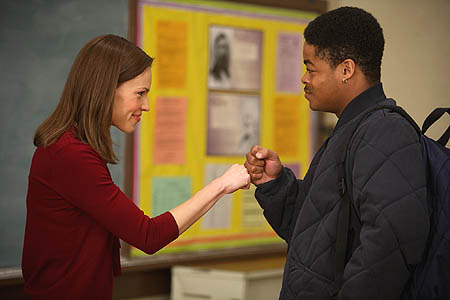 BRISTOL, Connecticut, U.S.A. — Everyone has a story. The students of Erin Gruwell’s freshmen English class are no exception.
The movie Freedom Writers, written and directed by Richard LaGravenese, is based on The Freedom Writers Diary, a collection of stories written by Gruwell’s students, which chronicle the hardships of being an inner city teen.
By the time they entered Woodrow Wilson High School in Long Beach, Calif., these students’ lives were plagued with everything from gang violence to jail time.
Gruwell, brilliantly portrayed by Hilary Swank, was the idealistic first year teacher who taught them tolerance and showed them that they had more in common that they originally believed.
At first glance, it seemed as though the only thing that the racially diverse students hated more than one another was Gruwell, but as the movie delved deeper into their personal lives, it became apparent that they were more alike than different.
An overwhelming majority of the students had seen gang violence first hand. Many had lost four or more friends and loved ones due to the rivalries, which were exacerbated by the Rodney King riots.
After one of her students draws an insulting cartoon of another student in her class, Gruwell lectures her students about prejudice and is stunned when she discovers that none of them have ever heard of the Holocaust.
Gruwell recognizes that her students each have a story to tell, so she buys them each a journal and a copy of The Diary of Anne Frank. For their assignment, the students must write an entry every day – but she will only read the journals if they want her to. To her surprise, the next day her cabinet is filled with journals, all waiting to be read.
Freedom Writers also highlights the flaws in the educational system. Although the school has plenty of copies of new books, Gruwell faces opposition from her fellow colleagues when she requests better supplies for her students. The English department head, played by Imelda Staunton, refuses to give Gruwell’s students new books because she is convinced that the books are above their level and they will only ruin them.
In order to provide her students with the education she feels they deserve, Gruwell works two other jobs in addition to teaching full-time, so she can buy them new books and afford other incentives, such as a trip to an amusement park and a Holocaust museum.
But the increased work load comes with a hefty cost. Gruwell’s marriage begins to crumble and her husband, played by Patrick Dempsey, eventually moves out, claiming that she doesn’t spend enough time with him because she is so devoted to her students.
Part of what is so captivating about this movie is that Gruwell never loses the courage of her convictions and she empowers her students by believing in them when no one else would.