Kotu, GAMBIA – After years of working without pay on popular coastal beaches, lifeguards are calling attention to what they say is financial mismanagement at the Red Dolphin Lifeguards Association and lack of recognition for their work.
More than 20 demonstrators – mostly youth – recently took to the streets to make their concerns heard before seeking help from the Gambian Tourism Board.“We need change, all step down” was written on one of the posters they used during a demonstration directly calling for the immediate change from the association’s executive department.
Eagerness to find answers to their problems was all written on their faces as the lifeguards made their way towards the headquarters of tourism board office in Kotu, a beach town on the nation’s western Atlantic coast. 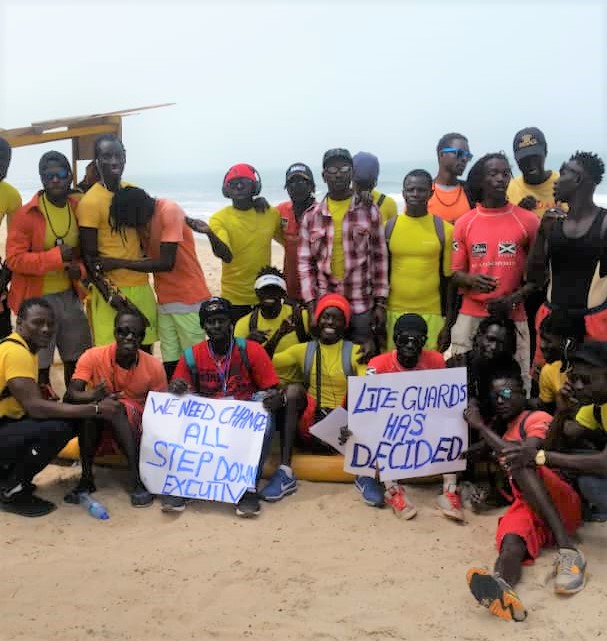 Members of the Red Dolphin Lifeguard Association at the beach. (Lama Jallow/YJI)

Kebba Kujabi was among the lifeguards demonstrating.
“We have been operating as lifeguards since 2006. It’s almost 12 years now. We don’t have pay. We are doing a good job within the community,” Kujabi said, adding the volunteer status leads to a lack of respect in the community.
“We want to change our executive members. They are corrupt,” said Kujabi. 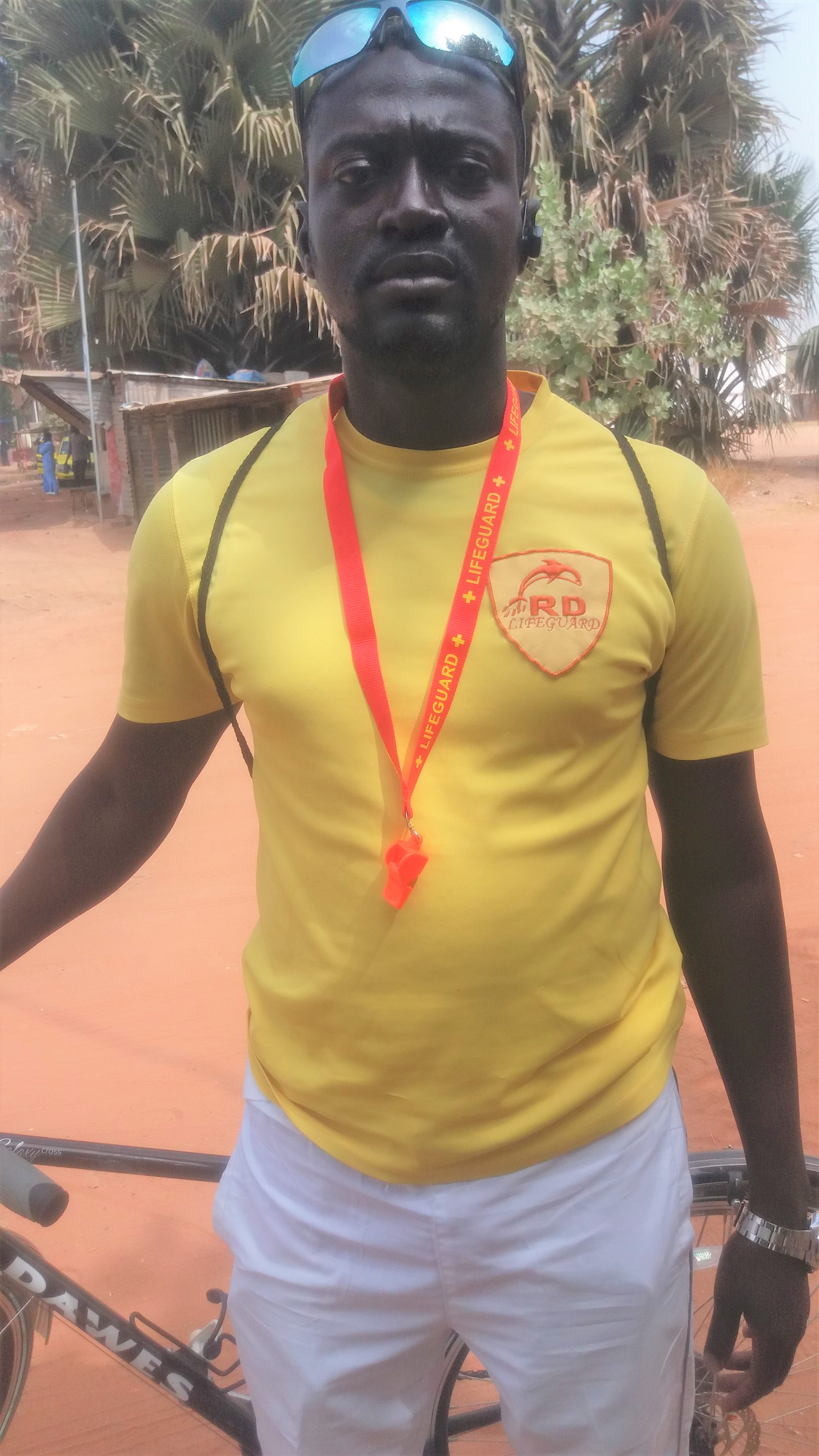 According to Momodou Lamin Jammeh, a lifeguard with 14 years experience, the current leaders are unfit.
“They can’t swim, number one. How can you call yourself a lifeguard when you can’t swim?” Jammeh asked. He said lifeguards with the association protect swimmers at five beaches in The Gambia, and resorts hire their lifeguards from the association.Since they are doing a good job saving lives at the beach, the guards say, they deserve respect and recognition. That is why they demonstrate, they said.
Jammeh said 35 lifeguards have signed a document in protest of what they say are the corrupt practices with association leadership.
The guards’ protests have led to calls for the executive board of the Red Dolphin Life Guard Association to step down and allow people who are willing to help solve their problems replace them.
They went to nearby Senegambia to have discussions with the tourism authorities they believed could intervene and bring a lasting solution to their demands.
Jammeh said the lifeguards want their leaders to provide transparency.
“Sometimes when money is wired to the association, there is no proper documentation,” said Jammeh, which angers lifeguards who are doing the work on the beach. They’ve been working hard, but their efforts don’t seem to be valued, he said.
“People are working,” Jammeh said. “People should be compensated for their efforts.”
Jammeh said he wants the tourism board to listen to the volunteer lifeguards who are working at the beach and trained through the Royal National Lifeboat Institution in England.
The training certification raised the status of the lifeguard association, said Jammeh, as well as the increased the prospects for individual lifeguards to get paying jobs.
The executives of the Gambian lifeguard association aren’t certified by the English institution, according to Jammeh.
“None of them passed,” Jammeh said. “None of them got a certificate.”
Jammeh said, “We don’t need so-called lifeguards, people who cannot swim even five meters or 10 meters out of their depth. That is very sad, talking about rescuing somebody whose life is in danger.” 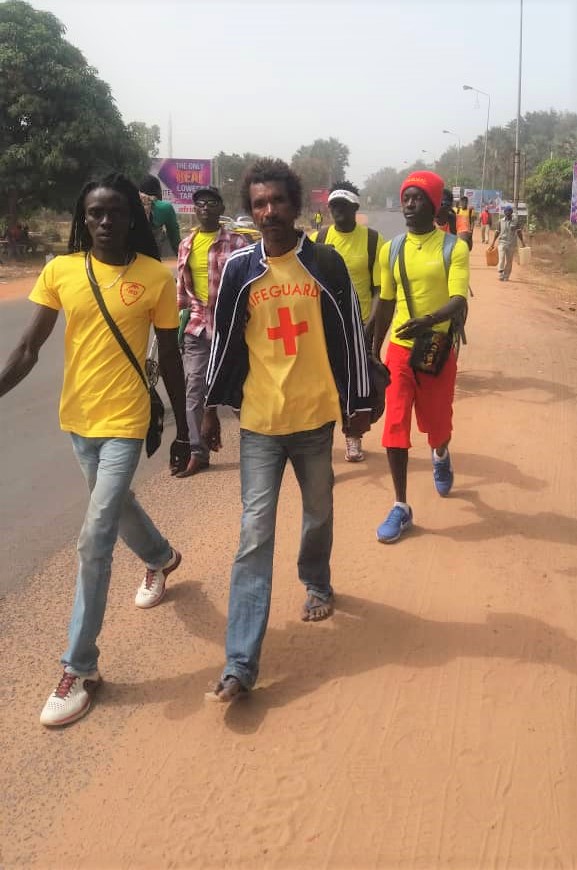 Lifeguards from the Red Dolphin Lifeguard Association in Senegambia, on the way to meet with tourism officials. (Lama Jallow/YJI)

“Even in Senegal, lifeguards would swim,” said Jammeh. “In England, lifeguards would swim. Why not the Gambia? The worst part of it is, how can you call yourself a lifeguard when you can’t swim?”
Among the oldest serving members, Jammeh is a former secretary general of the association.Jammeh said he and others who founded the lifeguard association invested their own money in it.
“We used to dip our hands into our pockets to facilitate the day-to-day running of the association,” said Jammeh. He said they personally solved the organization’s financial issues whenever they had the means to do so.
Among the equipment they bought with their own money is a floating device called a “torpedo.” It is used to help victims afloat and avoid drowning.
The torpedo cost him £40 pounds, according to Jammeh – a good-sized sum in the Gambia.
After he had exhausted his term limit, Jammeh said, he stepped aside to let newer guards take leadership roles.
Now, things are different, he said. The association is “flourishing,” he said, but its leaders aren’t protecting it.
“The lifeguards are very angry,” Jammeh said. “They want to put a stop to that. The situation needs redressing, and the sooner the better.”
Although their demands have yet to take effect, the members of the Red Dolphin Lifeguard Association remain hopeful that things will change for the better.
“The Red Dolphin Lifeguards Association is a charitable association, and it needs to serve humanity, but not to exploit our fellow Gambians,” said Jammeh.

Lama Jallow is a Senior Reporter with Youth Journalism International.