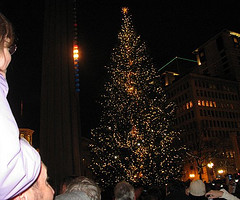 PORTLAND, Oregon, U.S.A. – I’m not much of a holiday spirit kind of guy, but I love the Christmas tree lighting celebration in Portland. I understand why the carols and the cocoa draw thousands of people to the ceremony each year.

What I can’t understand is why a young man my age would want to blow it all up.

I was there with my family in Pioneer Courthouse Square last Friday for the holiday festivities, but it wasn’t until I got home that I learned federal agents had arrested 19-year-old Mohamed Osman Mohamud, accusing him of plotting to set off a bomb there.

The day of the tree lighting was a crisp fall day, though it felt like winter. I was simply glad that the bipolar weather that had recently decided to nest upon the valley’s surface was giving the rain a break.

In Portland, we are definitely used to feeling soggy, since rain is prevalent most of the year. But my family had come to the city for the day to see the tree lighting, and I wasn’t looking forward to standing in the open public square without an umbrella as the drops poured down.

We got to the square at about 5:45 p.m. My nose was numb, and I could see the red tinge of chill on my sister’s cheeks. But hey, like I said, no rain.

The tree lighting in Portland is a beautiful thing, and even for me – someone who has never professed to be much of a ‘holiday spirit’ kind of guy – it really is fantastic.

Everyone is smiling, everyone is singing (well, almost everyone . . . you can’t have a crowd of well over a couple thousand, and not expect a few grinches, I suppose) and cups of cocoa and coffee are in nearly every hand.
Cocoa says Christmas for me, and a deep whiff of peppermint-flavored chocolate makes the scene of the tree, the band on stage, and the people, just perfect.

So I will always wonder why someone would want to destroy such a thing.

The night really was just right. It was cold, but I liked it that way. We were there for a Christmas tree lighting, after all, and lights and trees should simply not meet, unless the weather has dropped to at least 40 degrees.

Portland Mayor Sam Adams was on stage with a youth choir and members of the band Pink Martini. Christmas songs were sung, all building up, of course, to the appearance of Santa, who would light the tree.

My family was having a blast, and I was, too. In truth, I noticed nothing unusual. Everything felt festive and safe, and it continued to feel that way until I stepped into the front door of my apartment.

I shivered, kicked off my shoes, and removed my maroon neck warmer that one of my sisters gave me last Christmas. It was much warmer inside than out, that was for sure.

I called out to my roommates to let them know I was home and almost immediately, they greeted with a question.

“Talon! Were you at the tree lighting?”

Because of their work schedules, neither of my roommates had been able to go. I walked into the front room and found my roommate Kaitlyn bent over her computer, concentrating on the screen before her.

“Dude,” said Kaitlyn, “Someone tried to blow it up!”

That really was a strange thing to hear, especially after I’d been feeling so uncharacteristically festive the whole night. Like I said, I’m not much of a holiday man, and her words clashed horribly with the taste of eggnog still on my tongue.

Kaitlyn turned her computer to me, showing the article that someone had shared over Facebook.

Mohamed Osman Mohamud. His picture was right beside the article. He was 19, the same age as me, and he had been involved in a plot to bomb the tree lighting.

Immediately my mind flashed to the scene I had been part of no less than an hour earlier, to all the people, to the cocoa.

“Glad you’re okay, buddy.” My other roommate, Matt, patted me on the back.

As I read further, I learned that no one in the square was ever in any actual danger. The bomb had been a fake and the whole thing had been a sting operation by the Federal Bureau of Investigation.

The more I read, the stranger it all felt, and the more conflicted I became over what I thought about what had almost happened, and what had actually happened.

A 19-year-old had been arrested for terrorism – jeez, he was no older than me!

For a time, it was all I could say.

Since then, I’ve read many reports about that night, and in some ways, I’ve become more confused.

Words like ‘entrapment’ have entered the picture, showing once again that nothing is ever in black and white.

But putting all that aside, I still feel like I’ve had a strange revelation.

I’m no saint, but I am a good enough person that I wouldn’t want innocents to die. And I just can’t seem to get it out of my head that there are people who do.

There are people among us with hate inside them strong enough to be willing to push the button that – had the bomb been real – would mean I couldn’t be writing this today.

I guess the world is a strange place. And, really, I had always intellectually been aware of that.

But when I think about the fact that my family was there, in the very spot where a tragedy could easily have occurred, where a horrendous crime was almost committed, it’s even stranger for me.

It’s the first time I’ve known in my gut that the world is a crazy place.

I’m happy to still be here, and wish you all happy holidays.

Talon Bronson is a Reporter for Youth Journalism International.