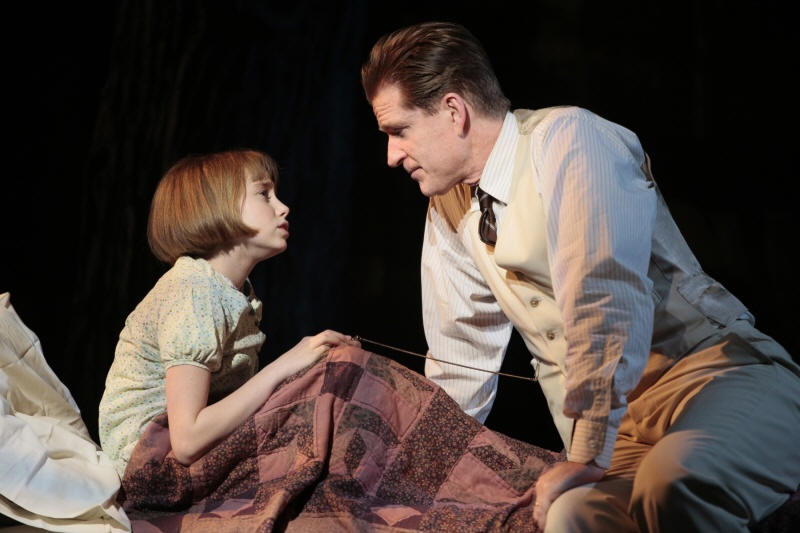 Hartford, Connecticut, UNITED STATES – The theater adaptation of Harper Lee’s classic, To Kill a Mockingbird, breathed new life into a classic traditionally read by students in the United States and around the world.
Now playing at Hartford Stage, the show dutifully told the story of Scout and Jem Finch, two young children of a lawyer named Atticus from a small Southern town in the 1930s.
The three main child actors who played Scout, her brother Jem, and their friend Dill, superbly represented the characters described by Lee in the book.
Scout, played by Olivia Scott, was a curious and energetic little girl. Henry Hodges accurately captured the journey of Jem’s character that elevates him from a mischievous boy to a young man.
And Andrew Shipman played Dill, the lively nephew of the Finch’s neighbor. Quite notably, the three young actors each managed to capture Southern accents successfully, which added to the authenticity of the story.
During the play, Mayella Ewell’s story developed alongside that of Boo Radley. In a controversial trial that split the townspeople, Mayella Ewell accused African American man Tom Robinson of rape. Rather than allow Tom, played by Douglas Lyons, to go to jail without a fight, Atticus Finch agreed to represent him in court.
There was tangible tension in the air during the courtroom scene that seemed to make the audience lean forward in anticipation.
Atticus, played by seasoned actor Matthew Modine, gave closing statements filled with both sense and passion.
“In our courts, all men are created equal,” he said as he asked the jury to see that Tom Robinson, who had only the use of one arm, could not have forcibly raped the girl. But to the great dismay of both the actual and courtroom audiences, Tom Robinson was found guilty and was dragged off, defeated, to prison.
Although Lyons as Tom Robinson did not have many lines, the immense pain in his face when the jury delivered the verdict made the courtroom scenes one of the most pivotal in the show.
As the dramatic story of Tom Robinson unfolded, so grew the three children’s interest in an elusive neighbor. Great mystery surrounded the story of Boo Radley, a middle-aged man who supposedly never left his house and once attempted to stab his father.
Naturally, Jem, Scout and Dill discussed every way possible to lure Boo outside, including placing a trail of lemon drops near his door. Yet at the end of the play, it becomes clear that the children did not have to spend their days convincing Boo to come out.
The stage adaptation of To Kill a Mockingbird was true to the classic book. In fact, nearly all the characters were presented as described by Lee.
Talented actors not only played the main roles that reinforced the original storyline, but the secondary characters added depth to the story. Calpurnia, played by Pat Bowie, served as a mother figure to Jem and Scout, scolding them even when their father did not.
The narration was unique. An adult Scout, also known as Jean-Louise Finch, narrated the story during scene breaks and changes of scenery.
Yet Jean-Louise, played by Hallie Foote, did not merely stand front and center to address the audience.
She also was intertwined with the actual events of the play, helping move a chair or hand a jump rope to children as she was talking about her memories of the scene that was about to unfold.
This way of handling the sometimes cumbersome duty of a narrator seemed to make her a more intimate part of the events.
The sets were visually interesting and perhaps as realistic as an audience could hope to see on the confines of the stage. The scenery even included a tall tree that Jem climbed up during the very first scene of the play.

Rachel Glogowski is an Associate Editor for Youth Journalism International.