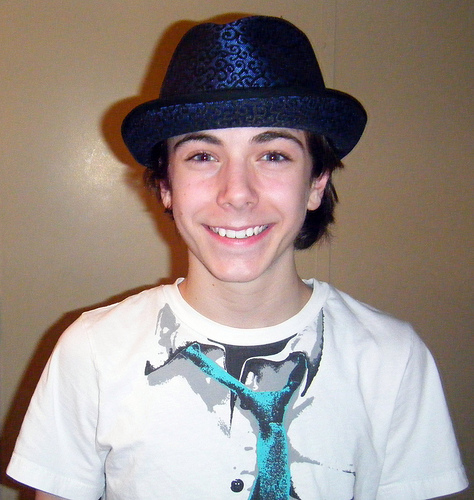 Henry Hodges, who plays Jem in The Hartford Stage's production of "To Kill a Mockingbird." (Mary Majerus-Collins/YJI)

HARTFORD, Connecticut, U.S.A. – Although he lives in New York City, 15-year-old Henry Hodges is spending his time in Connecticut these days.

Hodges has the important role of Jem in the Hartford Stage production of “To Kill a Mockingbird.”

Hodges said he’s been acting since he was four. He’s got five Broadway shows, including the famous Shakespearean play, “Macbeth,” to his credit.

Originally from Maryland, Hodges moved to New York to pursue acting, he said. He was on tour with the production of “Beauty and the Beast,” so he’s very used to moving.

“We’ve cut down a lot of belongings,” he said, “so we’re prepared to hop from city to city.”

While playing Jem, Hodges is staying in Hartford.

He’s homeschooled by his mother, which is easier to balance with acting than a school schedule.

Hodges is a younger child in the family. His older sister, Charlotte, is 21 and goes to college in England.

When he’s not on stage, Hodges rides a unicycle, Ripstick, and does skin boarding for fun.

“This is an ultimate environment to be in as an actor,” he said. “I’m constantly learning with the best.”

He enjoys acting in “To Kill a Mockingbird,” he said, and doesn’t mind doing the production many times.

“It’s always different,” said Hodges, who has to use a Southern accent in the show. ‘Sometimes a prop is not there, or someone forgets a line.’

Theater is a tight-knit community, Hodges said. Before the show, he said, the cast stands in a circle, holds hands and does a traditional “pulse,” passing a squeeze from one hand to the next.

Although Hodges has been acting for 11 years, he’s still learning new things.

“As an actor, you are never done learning.”

To aspiring young actors, Hodges advised, “Keep on trying,” and “Never give up.”

Rachel Glogowski is an Associate Editor and Mary Majerus-Collins is a Junior Reporter, both for Youth Journalism International.