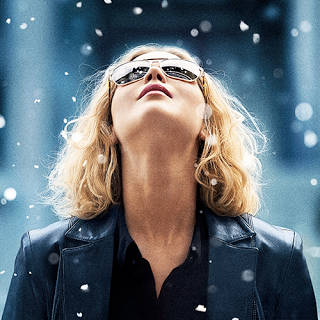 Jennifer Lawrence plays Joy Mangano in the 2015 film Joy.
AUSTIN, Texas, U.S.A. – Director David O. Russell’s Joy is anything but a joy to watch.
It is as if he chose to smash together the worst parts of his last two films, combining the Lifetime movie aesthetic of Silver Linings Playbook with the cartoonish approach to characterization of American Hustle.

The result is a confused mess in which various accomplished actors dial it up to 11 but fail to cohere with each other’s performances, and at times feel like they are each appearing in completely different movies.
Like many of Russell’s films, the 2015 release Joy is a true story about which the director has taken substantial artistic liberties. Jennifer Lawrence, whose
performance is good if – by her standards – unspectacular, plays Joy Mangano, the inventor of the miracle mop, a self-wringing mop that made her fortune
after it became a hit on the QVC home shopping channel.

At the start of the film, Joy is a divorced mother of two who works as a booking clerk for an airline whilst trying to look after her dysfunctional extended family. Her divorced mother Terri (Virginia Madsen) is a shut-in who spends all day in bed watching soap operas. Her father
Rudy, in yet another bad later career performance from Robert De Niro, is an emotionally unstable serial womanizer who is dating Joy’s financier Trudy (Isabella Rossellini.)
Rudy lives in the basement along with Joy’s ex-husband and small-time singer Tony (Edgar Ramirez.) Joy’s grandmother Mimi (Diane Ladd) appears periodically to tell Joy not to give up on her dreams of being an inventor, while her half-sister Peggy (Elisabeth Rohm) appears periodically to tell her the opposite. Joy’s best friend Jackie (Dascha Polanco) appears periodically to say very little and do even less.
If this all sounds a bit messy that’s because it is. In fact it’s enough to make you want to skip the rest of the film, get on the next flight to LA and invite Russell round for dinner. For his sake, not yours. Someone who could think that this cacophony of characters bears any resemblance to real life desperately needs to be exposed to people who are more
than just a collection of over-exaggerated tropes.
In the real world, people who see a mop head full of large shards of glass and decide to vigorously wring it out with their bare hands end up severing an artery, but in Russell’s world they invent a product that makes them millions. Go figure.
The film does momentarily spark into life when Joy goes to the QVC headquarters to pitch her new mop to executive Neil Walker (Bradley Cooper.)
In the artificial environs of a QVC studio, Russell’s style finally begins to make sense. It doesn’t matter if the dialogue feels forced because QVC is the home of obviously scripted dialogue. Nor can the characters feel too big in a studio where Joan Rivers was a regular star. For about 15 minutes, Joy is about television, capitalism and the American Dream; artifice, individual enterprise and a huge digital scoreboard ticking off hundreds of thousands of dollars’ worth of sales.
It is not enough to save the film. When Joy returns home from QVC, she has to continue her somewhat banal struggle to overcome her family, her corrupt business partner and above all to overcome Russell’s muddled plotting.
Ultimately, Joy is just too confused to work. De Niro plays his part as if he’s still in Meet the Fockers, Cooper as if he’s in an Aaron Sorkin film, and the rest of the supporting cast as if they’re the comic relief on a network TV drama.
If Jennifer Lawrence is expected to clean this mess up, then she’s going to need a bigger mop.
Noah Kidron-Style is a Correspondent for Youth Journalism International.
***
Your tax-deductible contribution helps students
served by this organization. Thank you.
www.HelpYJI.org