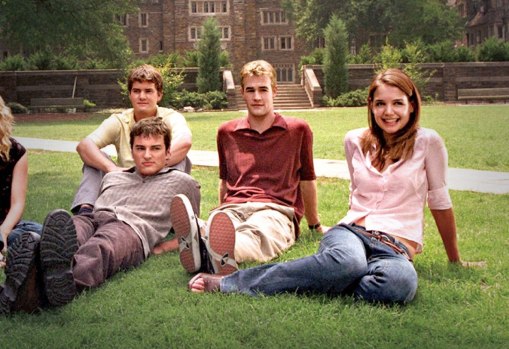 BRISTOL, Connecticut, U.S.A. — The theme of the show is sex.

The main character is Dawson. His best friend is a girl named Joey. The two realize they are too old to have their innocent friendly sleepovers. And now Joey is in love with her life-long best friend.

Dawson likes the new girl, Jen. In the first episode she lies and says she is a virgin. But in a later episode she reveals that she has slept around. Joey is jealous of her.

Dawson’s other friend, Pacey, is in a relationship with his English teacher, Miss Jones, or Tamara. Every time the teacher says their relationship is “getting too dangerous,” they have sex immediately after.

In a recent episode, they went to court and Pacey denied the relationship.

This show, which recently came out, airs Tuesday nights on the WB network at 9 p.m. The hour-long show is about the sex lives of every character that comes into play.

Dawson’s mom cheats on her husband with her co-anchor at work. Joey’s sister is unmarried and just had a baby boy. Pacey lies to Tamara and tells her that his older brother, who likes Tamara, is gay.

As a sophomore myself, this doesn’t seem like the typical life of a teen. Sure, teens think, talk about, and/or have sex. But most people don’t make a living out of it. Most teens have school taking up a major part of their lives.

The only importance that seems to be put on school in this show is trying to keep the teacher-student sexual relationship on the down low. This may be typical of Bristol Central High School, but I doubt it’s the norm.

I hope the writers and producers of this show weren’t trying to teach teenagers something. I think it is a very negative portrayal of teenage life. Life isn’t all about sex! There’s enough of that on television.

After all the hype they made about the show, they could have at least made it something worthwhile (and have some actors who look like they’re about 15).

If your’re bored and want to escape from your own life for a while — and can take some wit — then watch the show. I’m not saying it isn’t entertaining. But if you limit your TV watching to only useful programs, then stay on the other side of the creek.

If producers of ‘Dawson’s Creek’ wanted to make a program about teenagers for a high school audience, they should have at least consulted some of us to make it decent and realistic.

Hila Yosafi is a Reporter for Youth Journalism International.