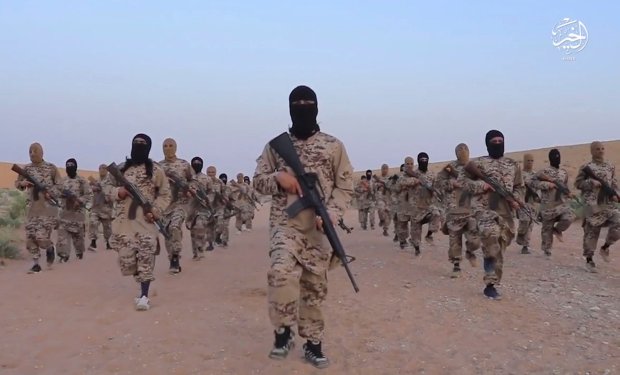 From an ISIS propaganda video.
SINGAPORE – The terrorist group known as ISIS has unleashed fear and carnage across much of Syria and Iraq.
It persecutes and executes people simply because of their ethnicity, religious belief, occupation and political ideology.

Fighters, both from within Iraq and Syria itself, as well as foreigners, some of whom originate from the United States, have helped fuel and sustain the ISIS war machine.

These terrorist are a major threat to the U.S., but I believe the threat will largely manifest not in the form of foreign fighters returning home, but rather, in the form of self-radicalized youth committing acts of terrorism after drawing inspiration from the ISIS propaganda machine.
The threat posed to the U.S. from American ISIS militants is minimal. A large number of them will simply perish in war while most others will continue living in ISIS-held territories, fearing arrest back home.
Only a fraction will attempt making a trip back, and unlike Europe, which is accessible by land from Syria, traveling to the U.S. would involve taking flights. This means that returning militants would need to pass through numerous border enforcement agencies, including those of the U.S., which has one of the most stringent border security protocols in the world.
Furthermore, countries bordering Syria have recently augmented their border security, making their-once porous borders with Syria and Iraq now more difficult to breach. These insurmountable hurdles make an undetected arrival of an ISIS fighter to the U.S. a distant reality.
But the same cannot be said for the virtual world. The internet – the very instrument that helped make seamless communication possible – has also aided ISIS by spreading its detrimental ideology to American shores.
Largely unregulated, the internet and several social media platforms are being exploited by terror groups such as ISIS to disseminate malicious messages and materials for radicalization, with pliable teenagers often being their intended audience.
Unlike those who are part of a terror cell, self-radicalized individuals are harder to identify as they often work alone and leave little traces for law enforcement. If gone unnoticed, the devastation these individuals inflict on others might be immense.
The world witnessed the Boston Marathon bombing, a heinous massacre perpetrated by the Tsarnaev brothers, who seem to have radicalized themselves through the internet.
Today, as ISIS is vying for greater influence both on the ground as well as in the virtual sphere, it will continue proliferating videos and articles with distorted teachings of Islam to entice viewers to either join them or violently rise up against their democratically-elected governments back home.
Imminent terror threats from returning ISIS fighters is unlikely. The number of radicals arising due to exposure to ISIS propaganda materials, however, is one that not only threatens America, but all the world.
Selvaganeshamoorthi Balakrishnan is a Junior Reporter for Youth Journalism International.
***
Your tax-deductible contribution can help support this nonprofit at
www.HelpYJI.org