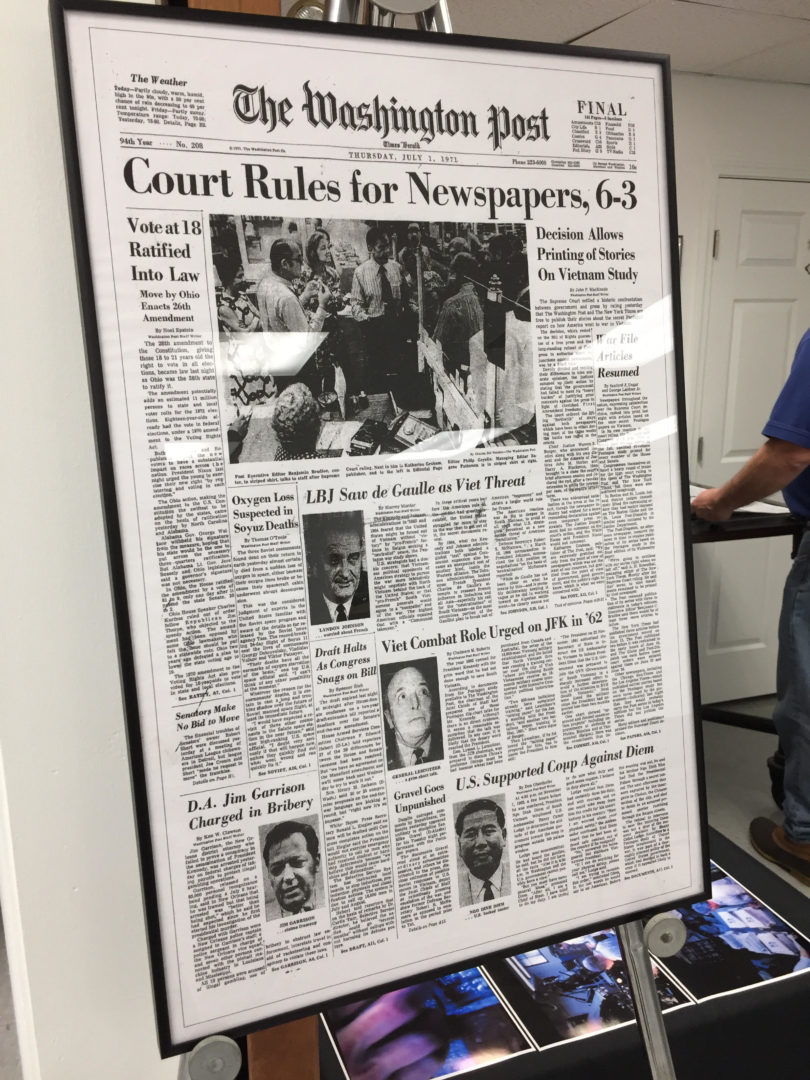 The July 1, 1971 front page of The Washington Post celebrating the U.S. Supreme Court victory in the case of the Pentagon Papers. (Arooj Khalid/YJI)

Haverhill, MASSACHUSETTS, U.S.A. – The printing of newspapers may seem like the most generic task today, but the Museum of Printing demonstrates the hidden levels of complexity that went into the craft.

The museum displays the work of famous print artists such as Lance Hidy, as well as the press machines and evolving computer technology that allow such art to happen.

It is also home to a piece of printing equipment called the “turtle.” It was featured in The Post, a new film starring Tom Hanks and Meryl Streep that depicts the courageous decision by Washington Post Publisher Katharine Graham to publish the Pentagon Papers in 1971. 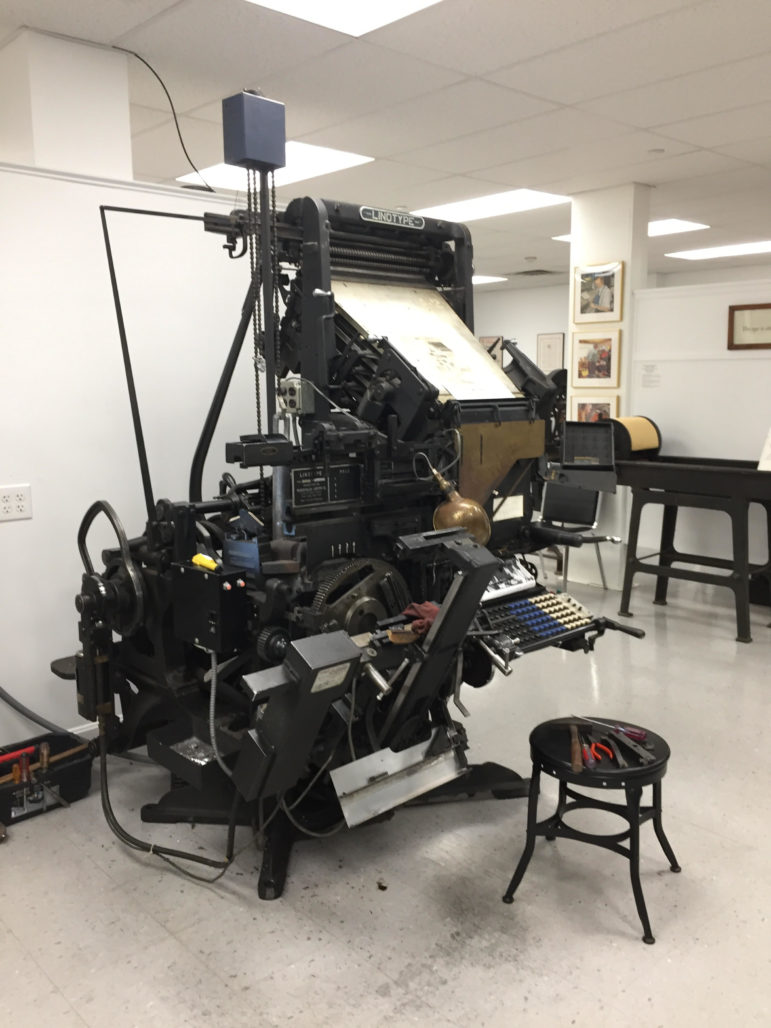 A Linotype machine, which were commonly used at newspapers at the time the Pentagon Papers were published, on display at the Museum of Printing. (Arooj Khalid/YJI)

A temporary exhibit, on display until April, shows the museum’s part in the making of the film, which is about Graham’s choice to publish the secret documents, which detailed the U.S. role in Vietnam and helped change public opinion against the war in Vietnam.

Frank Romano, museum president and one of its founders, described the impact of the Post’s controversial actions.

“That was a landmark in the history of press freedom.”

Romano went on to explain the relationship between what the film showed and what the museum displayed.

Although The Post film only featured two turtles, Romano said in reality there were usually around 25 machines in one newsroom. They were also very slow moving machines, not well suited to the fast-paced nature of today’s news cycle.

“Today you have to move fast to get things done,” said Romano, who worked with the Washington Post to convert processes from the metal era to photo typesetting.

Romano described that the scene in The Post where a printer is shown working on one of the turtles, he’s actually working on a New York Times page, even though the movie shows The Washington Post office.

At the Times, Romano said, the paper set up a room on the fifth floor of their building, with tremendous security where they were producing the Pentagon Papers issue of the newspaper.

The Post only came into the scene later. Barred by a court order, The Times, paused in its publication of the massive Pentagon Papers.

That’s when the Post published the classified documents and joined forces with the Times in a legal battle that went to the U.S. Supreme Court.

The newspapers asked for an accelerated ruling to publish the documents and won, resulting in the headline featured in the movie, ‘’Court Rules for Newspapers 6-3.”

Romano explained the printing process shown in the film. First, the pages of a newspaper were set up on a linotype on the turtle, which would later be formed into a “lockup.” The lockup is pressed onto paper in a stereotype machine and results in a paper mold called a stereotype or flong, which is then made into a cylindrical metal mold.

These cylinders were made for every page of the newspaper and then used to print as many as required. Romano said the front page mold was always created last in case there was a breaking story that had to be added. 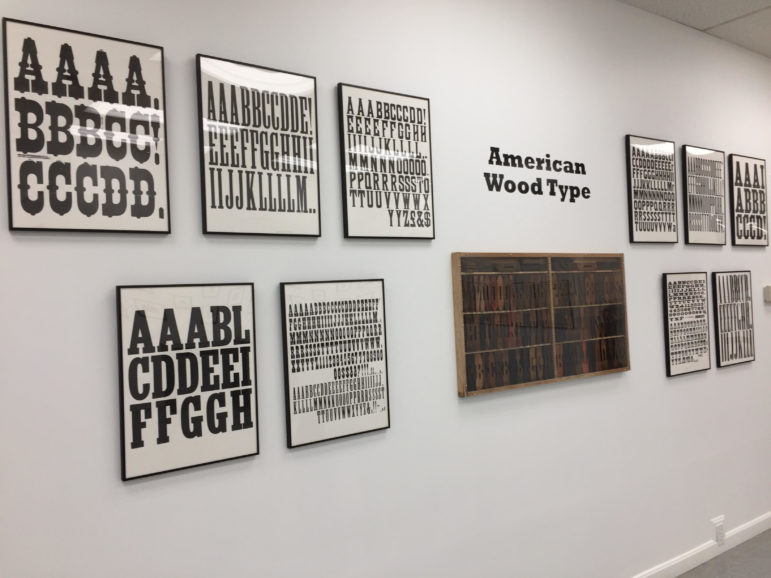 Different styles of type are on display at the Museum of Printing. (Arooj Khalid/YJI)

In the end, they would melt the metal back to make new molds for new pages.

Roman explained the way in which newspapers in those days had to carefully design the layout. This included the process of kerning, in which editors would remove unnecessary spaces between letters, albeit somewhat effectively.

“The typography of newspapers in those days was terrible,” Romano said, pointing out the inconsistent spacing in one edition of the Post.

Visitors at the museum get the chance to try their own hand at printing with the help of printers Richard Pattison and Ted Leigh. They begin by setting their name on a mold with the help of 91-year-old Pattison, who has been working as a printer for more than 50 years.

They then head over to the press with Leigh, who has also worked as a printer for over 50 years, to put their mold in the machine and print their name on a certificate inducting them into the “Hot Metal Slug Casters.”

The process, open to children and adults, gives visitors a more intimate look at the work that goes into printing a newspaper and a keepsake to take home.

The Museum of Printing is open every Saturday from 10 a.m. to 4 p.m. Admission is $8 for adults and $5 for children, students and seniors.

Mugdha Gurram and Arooj Khalid are both Correspondents for Youth Journalism International.