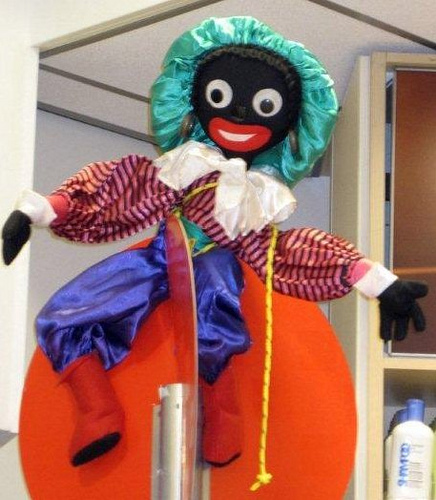 ERMELO, Gelderland, Netherlands – While children in most Christmas-celebrating countries find presents under the Christmas tree, Dutch children look forward to gifts during their Sinterklaas celebration.

Sinterklaas is a celebration in honor of Saint Nicholas, with a lot of customs. There are traditional songs and even special television shows for children. Sinterklaas travels, so the story goes, from Spain to the Netherlands in a steamboat filled with gifts. 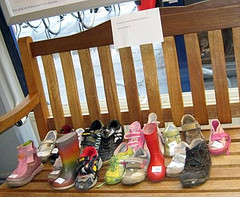 Though December 6 is the anniversary of the death of St. Nicholas, the main celebration is held here on Sinterklaas Eve, the evening of December 5.

The fun starts weeks ahead of time. In November, most towns organize a parade to welcome Sinterklaas, who rides into town on a white horse.

In the weeks that follow, children can put a shoe in front of the fireplace before they go to sleep about once a week. They often put a drawing for Sinterklaas and a carrot and hay for his horse in it.

Much like the American Santa Claus tradition – which may have been derived from Sinterklaas, brought to the United States by Dutch settlers – children of the Netherlands believe that Sinterklaas has a big book that tells how each of them behaved over the past year.

If a child has been good, Sinterklaas will put candy or a small present in his or her shoe. In the past, children were told they would be taken to Spain in a jute sack if they’d been naughty, but nowadays, most parents don’t do that anymore.

Some Sinterklaas customs are sweet.

Families get together and eat traditional candy that’s associated with the Sinterklaas celebrations, like speculaas, pepernoten (tiny round speculaas cookies) and marzipan.

Chocoladeletters, letters made of chocolate, are very popular as well, and people usually get the first letter of their first name. 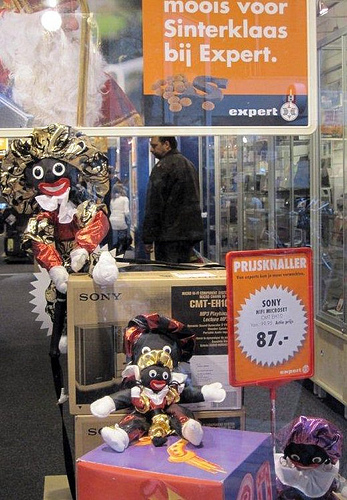 But one part of the holiday – the story of Sinterklaas’ servant, Zwarte Piet, or Black Pete – is getting some criticism.

Around Sinterklaas time, shop windows in the Netherlands are decorated with googly-eyed Zwarte Piet dolls.

During Sinterklaas parades and visits to schools, white people who have painted their faces black to look like Zwarte Piet hand pepernoten to the children.

Not everyone thinks this is just an innocent tradition.

Willem Slaapmaat, member of the left-wing organization Doorbraak, said his group wants to bring Zwarte Piet’s role up for discussion.

Slaapmaat said there’s a lot of colonial influence in Zwarte Piet and his role as servant of the white Sinterklaas. He said black people are stereotyped by the way Zwarte Piet is depicted.

He compared the figure of Zwarte Piet with the blackface tradition of whites painting their faces black to portray a black person, and with the Golliwog doll.

“Zwarte Piet doesn’t tell anything about the way black people really are, but it does say a lot about the way white people have portrayed black people and (in the case of Zwarte Piet) still portray in popular image culture,” his colleague Hans Westerink said in a statement.

Zwarte Piet is a touchy subject in The Netherlands, Slaapmaat said.

When his group wanted to organize a protest against the figure in August of 2008, many Dutch people reacted fiercely, he said.

“We got a lot of hatemail,” said Slaapmaat. 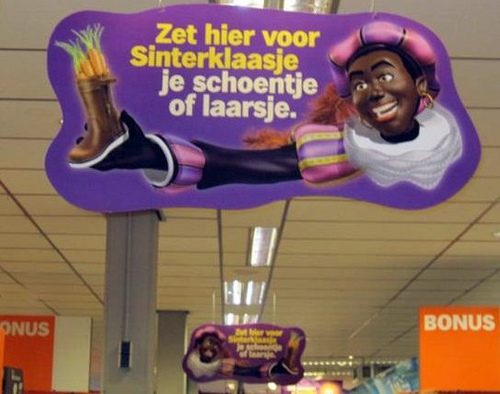 “Black Pete” signs in a store in the Netherlands. (Caroline Nelissen/YJI)

Dick Houtzager of Art.1, a national association against discrimination, said they don’t really have an opinion whether using Zwarte Piet in the Sinterklaas celebrations is good or bad.

But Houtzager noted that there is a very sad history – slavery – attached to the Zwarte Piet tradition.

He said Art.1 wouldn’t want to go as far as banning it, though.

“The tradition is way too deep-rooted in the Netherlands for that,” Houtzager said. 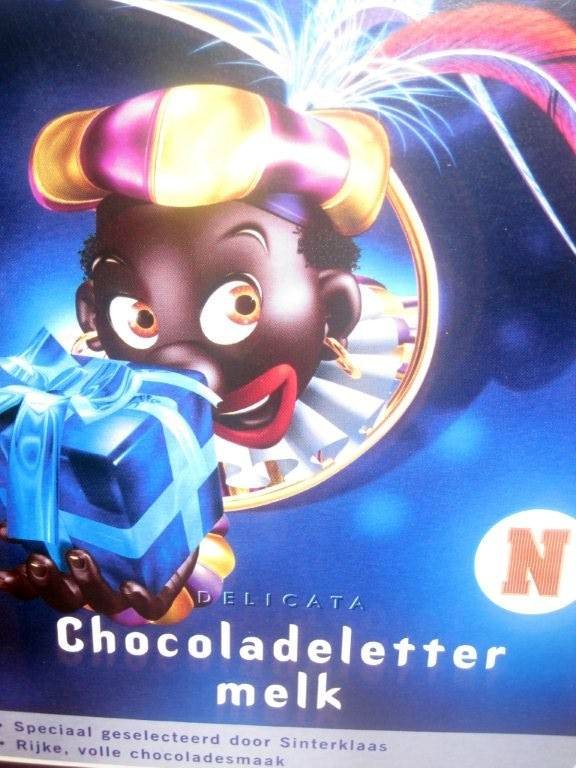 But the group does want to make people more conscious of the history of the tradition by spreading information, he said.

Despite the voices against the Zwarte Piet tradition, many Dutch people don’t seem to be willing to change it.

Laura Morren, a 17-year-old senior at the Christelijk College Nassau Veluwe in Harderwijk, has played Zwarte Piet herself.

She said the tradition of Zwarte Piet has absolutely nothing to do with racism. Although it historically comes from slavery, she said, that’s not how it’s looked upon today.

According to Morren, children don’t even see Zwarte Piet as a black person. “Children are told he’s black because he has come through the chimney,” she said. “When a child noticed a white spot on my hand, I just said that my hands always clean up much faster.”

Zwarte Piet is seen more as a special sort of person, Morren said, who entertains children.

“I also see dark-skinned people who participate, so I don’t think they see it as discrimination, either,” Morren said.

Many young people interviewed agreed with her and said they don’t think anything should change about the Zwarte Piet tradition. Most even reacted a bit surprised to the question and were stunned that the custom would be viewed as discrimination.

In Ermelo’s Sinterklaas parade, there were a lot of Zwarte Piets handing out candy to children. Some of the children were dressed up like little Zwarte Piets themselves.

Across town, shops were decorated with Zwarte Piet dolls.

Despite the criticism, it doesn’t look like the Dutch Zwarte Piet tradition is one that will disappear anytime soon.

Caroline Nelissen is a Reporter for Youth Journalism International.