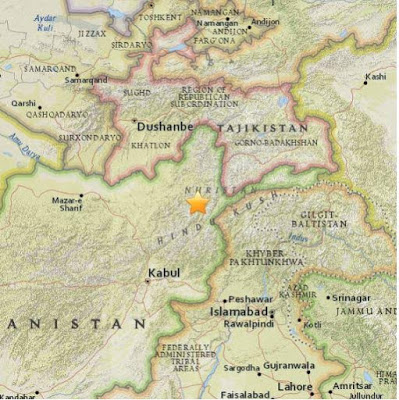 I experienced that feeling today, when one of the strongest earthquakes in Pakistan’s history hit the country today.

It was around 2 p.m. local time, and I was immersed in a chemistry text book in a far upper corner of the school. Suddenly, I felt as if a tremor had shaken through the floor. Discounting it as a mere misapprehension, I went back to the world of ionic equilibriums and solubility products.

A few moments passed. Before I knew it, the ground began to shake like anything. Realizing the gravity of the situation, I stood up at once and made my way down the stairwell as carefully as possible.
Other students were going through the same drill. In moments, anxious kids filled the entirety of the grounds. Unable to contact their parents – communication signals were down – many students looked disoriented.
The earthquake came in waves, with a respite of four to five seconds in between. Though it lasted barely a few minutes, the magnitude was 7.5, according to the U.S. Geological Survey.
Pakistanis are not unfamiliar with quakes of such extent. In the month of October, exactly 10 years ago, a similar earthquake left the people shocked beyond comprehension.

There were more than a few students who remembered clearly the horror we all experienced a decade ago. With those memories still clear in their minds, today’s quake undoubtedly took a toll on many young minds.
With the epicenter of the earthquake north of Kabul, near the Afghan border with Pakistan, citizens in Lahore encountered only the tail end of the earthquake. Landslides in the mountainous terrains have left people trapped, awaiting rescue.
With the Pakistani news organization Dawn reporting more than 200 dead and many more injured – and the numbers are rising – today marks a grave tragedy for the nation.
We are on a high alert for a probable after-shock, which is estimated to occur within a day, and praying for the well-being of the affected families.
Hafsa Ahmed is a Junior Reporter for Youth Journalism International.
***
Your tax-deductible contribution can help support this nonprofit at
www.HelpYJI.org