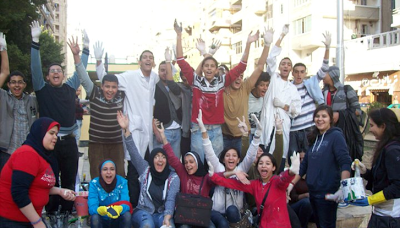 By Jessica Elsayed
Senior Reporter
Youth Journalism International
ALEXANDRIA, Egypt – The youth of Egypt took to the streets again this week, to clean up this time, not to protest.
Now that former President Hosni Mubarak has stepped down and we’ve celebrated our victorious revolution, what might seem like the end of our fight for freedom is merely just beginning.
What many may not know about the two weeks after the revolution is that it is still a constant battle to maintain the revolution’s achievements and guarantee future reform.
It is without a doubt a new era for Egypt and the sun is shining brighter than in any year past, but there are still the remains of an old regime which people, even in Egypt, sometimes neglect.
For example the prime minister, Ahmed Shafik, who was hired by Mubarak before he stepped down, has not yet resigned.
There are opposing views when it comes to Shafik. Some believe we should give him a chance to prove that he is a man of change and wait for his newly assigned government, just sworn in Tuesday, to work before we judge him.
Others see that they cannot trust a man of two faces, one for Mubarak when the old regime stood and, once it fell, another face for the people.
There is also a feeling that there is still a hidden hand from the old regime working in what people call “the opposing revolution,” which seems to be trying to take away the purity and success of the revolution.
This feeling is a result of Shafik not removing corrupt ministers such as Foreign Minister Ahmed Aboul Gheit from office. Who is this person and what favor does it do him to keep the faces of the dictatorship in office? There are also reports that Shafik traveled to Sharm El Sheikh, where Mubarak is said to be staying, and spent time with the old dictator.
These reports may or may not be true. There are opposing reports saying Mubarak is in Saudi Arabia for treatment of pancreatic cancer.
It seems that no one knows for sure what is happening exactly, but there are things that are certain and that brings us back to the youth in the streets.
Since February 12 – the first day of our new, free Egypt – youth from all walks of life gathered in their neighborhoods to fix their newly reclaimed country.
Students from elementary school to college spent hours a day, every day, painting walls, picking up garbage and fixing the streets.
I joined other youth in an amazing effort in Alexandria, where we painted the sidewalks of the entire Corniche Road along the Mediterranean and cleaned the alleys and streets, making Egypt look like the paradise we’ve always wanted.
Why do we do it?
We feel these streets are now actually ours and we love our country.
For us, it’s the least we can do.
********
Youth Journalism International’s annual journalism contest is underway.
See www.YouthJournalism.org for details.