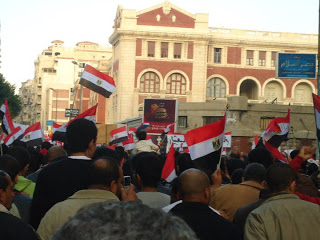 But his disappointing speech was no joke to the Egyptian people who have sacrificed everything for the past 18 days for freedom and democracy.
Basically the context of the speech revolved around how Mubarak has done so much for this country for the past 60 years and that he is determined to stay in power.
He also sent to condolences to the martyrs of the revolution, referring to them as “our” martyrs and not his or the entire country’s.
Mubarak referred to the so-called changes that he already made and said that he strongly refuses taking orders from foreigners.
You could hear Tahrir Square’s blood boil after the speech. We heard of people who fainted in disbelief along with reports of impending heart attacks on those with weak hearts.
Egypt is quite used to being severely disappointed by Mubarak but what was truly enraging was the fact this speech almost implied that he was deaf, blind and dumb to what is happening around him.
As he spoke, Al Jazeera showed the millions of people in Tahrir Square as they raised their shoes while he spoke. Those at home were cursing and yelling and coming close to breaking their TV screens.
Before the speech there were several confirmed reports from news agencies like NBC and CCN that Mubarak was to resign that night. This sent a wave of joy and celebrations throughout the standing demonstrations in several cities.
Egypt finally felt that victory was near.
But this happiness was all taken away in a matter of minutes.
It is evident, however, through the way the protesters have handled disappointed over the past three weeks, that this is not the end.
The heroes of Tahrir Square and other gathering places all over Egypt will not give up.
Today, it is expected that 15 million will gather to demand the removal of the regime.
Just as it is painful for a woman to give birth, one of the strong chants of Tahrir is: “Hang in there Egypt. Freedom is being born.”
See this link for all of Jessica Elsayed’s dispatches from Egypt since the start of the revolt on January 25.
********
Youth Journalism International’s annual journalism contest is underway. See www.YouthJournalism.org for details.