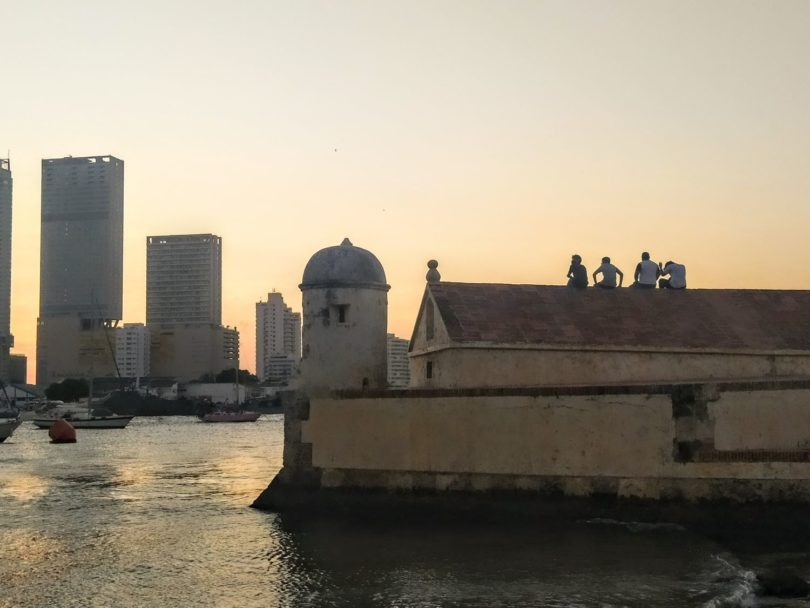 People sit atop a building along the historic walls of the Old City of Cartegena. In the background, modern new buildings along the harbor. (Ana Fadul/YJI)

Cartagena, COLOMBIA – In the heat of the Caribbean in an astounding humidity lies Cartagena. It’s a place that can be best described as a coin flip: half the time a Miami-style modern city made up of skyscrapers, and the other half a walking museum full of 16th century architecture left behind from the country’s colonial times.

The dichotomy often seems weird at first, but the city’s ability to shift ambiances makes it unique.

Founded on the first of June in 1533, for hundreds of years Cartagena was used as a connection between Spain and its empire in the Americas. It’s now a tourist hotspot for people both inside and outside the country.

Known for its incredible views of the Caribbean Sea, historical buildings, and nightlife, it has a range of activities for any visitor or local to enjoy.

At the center of it all lies the walled city, A UNESCO World Heritage Site that was built as a military fortress to protect Cartagena.

Four hundred years after their creation, 16 of the 20 original walls are still standing, and inside them hold some of the country’s most important historical and cultural sites.

From the Cathedral of Cartagena to the Clock Tower, there isn’t a moment inside when you cannot see a historical site, but among the old time buildings you can also find modern day activities.

This begins in the streets, where after walking just a few meters you can find a world of experiences. There are works of graffiti three meters tall with the quality and detail to be presented in a gallery. In the paintings, the graffiti artists sometimes give subtle hints towards the city’s issues that haven’t been addressed.

In front of them you can often find informal sellers with hats, bracelets, bags, or necklaces traditional from the region.

But most importantly, the most interesting things to see are the activities that don’t have any relation between each other, from a group of teens walking around with a loudspeaker while singing a mix between rap and the regional music style of Champeta, to the selling of fresh fruit at any point in the day, and a Michael Jackson impersonator dancing in front of a church.

Outside the walls of the old city, it’s a mix of everything. On one side you find two-story buildings with brightly colored paper decorations between them, and on the other, newly created skyscrapers.

Most places are near the bright blue Caribbean Sea. Its warm waters make it perfect for swimmers, and its deep colors are a wonder to behold.

Walking a few hundred meters makes you feel like you just changed from one city to another on the opposite side of the country.

Those transitions, even though weird, is what makes it unique. The fact is that there is a version of Cartagena for anyone to enjoy.

Ana Fadul is a Senior Reporter with Youth Journalism International.