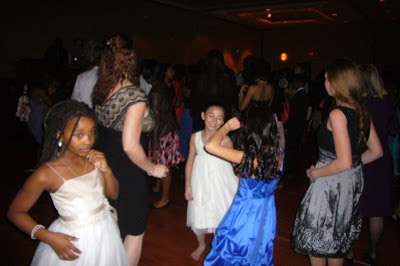 ALEXANDRIA, Virginia, U.S.A. – I felt like a princess at my first-ever formal ball.

Held last Saturday, it was the Youth Presidential Inaugural Ball at the Crystal City Gateway Marriott in Arlington, Virginia.

There were a lot of kids dressed up, and that’s unusual for most kids.
When we arrived, we found a table and listened to the invocation and welcoming remarks. Then we had a nice dinner of chicken and mashed potatoes and lots of gravy. It was yummy.
Some really good musical performances and a dramatic reading by kids followed the dinner.
Somebody from the White House spoke and said that any one of us could be a future President of the United States (except for me, since I was born in China).
We played a trivia game about the President, with questions like, “Which number President is Obama?”
Finally, the music started and all the kids ran onto the dance floor.
I danced with my friend, Kiki, and cousin, Victoria, so much my feet hurt.
It was a great night and I look forward to going again in four years!
Khloe Krizek is a Junior Reporter for Youth Journalism International.