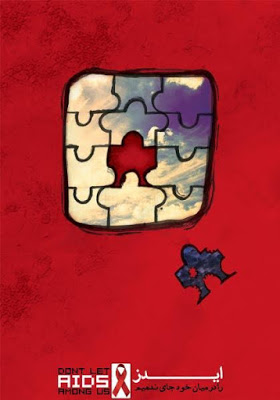 A poster by the Iranian Health Ministry for World AIDS Day
TABRIZ, Iran – Today, on World AIDS Day, we will see a lot of red ribbons.
But the truth is that the terrible disease AIDS will not end only with ribbons.
AIDS education is also a battle against ignorance. We all need to stand beside each other to work toward the United Nations goal of eliminating AIDS by 2030.

Today is the day. It is time to rise, act and protect.
Medical professionals first found AIDS, or acquired immune deficiency syndrome, in the United States in 1981. The disease remains a top global health threat,
especially in poor countries.
Despite large scale medical advances, including drugs to prevent and treat the disease, there is still a long way to go in the fight against AIDS.
According to UNAIDS, there were approximately 36.9 million people living with HIV at the end of 2014. The numbers are huge, but the problem is even bigger.
AIDS is the second leading cause of death among adolescents after road accidents, according to the World Health Organization.
Currently, though scientists are working towards one, there is no effective vaccine for AIDS. This is why awareness and prevention are two key factors in avoiding the infection.
World AIDS Day, which began in 1988, aims to connect people around the world globally with the mission of destroying or at least minimizing the damage caused by the disease. This year’s theme, announced by UN, is “Getting to zero; End AIDS by 2030.”
The day is also an opportunity to show support and solidarity for the fight against AIDS. Countries all over the world organize rallies, public seminars, social campaigns and different activities in order to raise attention for further prevention of AIDS.
World AIDS Day is also devoted to mourning those who lost their lives to the disease.

After 27 years, there is some progress.
In a report released in July, UN Secretary-General Ban Ki-moon said the world has the knowledge and tools to end the AIDS epidemic within 15 years. The world now spends $19 billion a year dealing with AIDS, he said, and almost twice that will be needed to meet the goal.
According to information released by UNAIDS, new HIV infections have fallen 38 percent since 2001 and the number of AIDS-related deaths have fallen by 35 percent since peaking in 2005.
Reaching young people is still an important and critical goal, as they remain at risk. Unless we are careful, we all carry the potential risk of becoming an AIDS patient one day.
So every step taken today is taken for tomorrow.
Frida Zeinali is a Junior Reporter for Youth Journalism International.
***
Your tax-deductible contribution can help support young writers,
artists and photographers world wide through this nonprofit at:
www.HelpYJI.org