TORONTO, Ontario, Canada — With a growing desire to help feed the hungry, two Toronto women planted the seeds of Second Harvest nearly 20 years ago. Today, this thriving organization brings surplus food where it is needed most.
Second Harvest distributes about 12,000 meals a day with a full and part-time staff of 19 and the support of about 375 volunteers who do everything from serving on the board to working in the warehouse and driving vehicles laden with food.
Second Harvest is “always looking for volunteers” said Jennifer Verschraegen, volunteer coordinator. 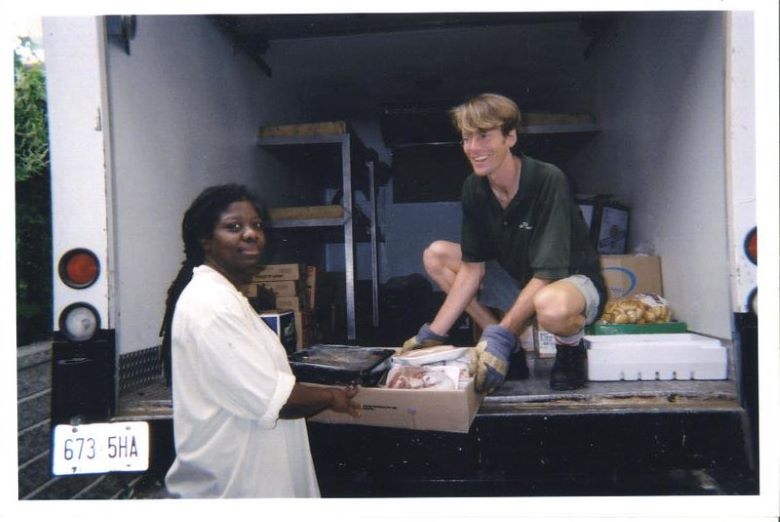 Verschraegen said Second Harvest also uses students as interns to help with odd jobs and special projects.
It’s “incredible to see how much time volunteers donate” Verschraegen said.
For the past three years Jane Ross has volunteered at Second Harvest – ever since she was a victim of hunger.
“It’s the fear,” Ross said, of not knowing where your food is going to come from. For her, the volunteer work at Second Harvest is a way of giving back.
In addition to sorting food and getting it ready for drivers, Ross created a system at Second Harvest to clean and recycle plastic, cardboard and paper.
Ross said her work for Second Harvest has boosted her experience in dealing with people, and given her both motivation and confidence.
Volunteering at Second Harvest is “a good canvas for life” Ross said.
The people getting the food would go hungry without help, according to Second Harvest driver Jeff Irwin.
“You feel like you are doing something good with the job,” Irwin said.
In 1985, Second Harvest organizers Ina Andre and Joan Clayton initially ran a public awareness campaign to draw attention to the countless starving citizens in Ethiopia.
Though the effort won some support and many donations, some Toronto residents questioned why the two weren’t addressing hunger in their hometown.
Andre and Clayton answered this question by dishing food out of the back of a station wagon.
Second Harvest gradually grew into a non-profit food recovery program, according to director Zoe Cormack Jones.
“I believe wholeheartedly in what we do,” said Jones.
When she began working for Second Harvest in 1997, Jones said, the agency had an operating budget of $700,000. This year, the budget is $1.3 million, she said, and next year’s is expected to reach $1.8 million.
Since Second Harvest moved to their current office three years ago, the organization has had its own warehouse, complete with six walk-in refrigerators and a walk-in freezer, Jones said.
Every day, Second Harvest drivers and volunteers deliver non-perishables to 165 social agencies, distribution coordinator Sam Sing said.
The drivers load the trucks with the food sorted the previous night from hundreds of donors.
Once the driver arrives at the social agency, they call out what they have to offer and the chef and helpers decide
what they want.
Second Harvest operates three Harvest Kitchens with a fourth coming on-line, Sing said.
At the Harvest Kitchens, unemployed people learn to prepare food for Second Harvest that goes to other agencies that don’t have kitchen facilities.
Second Harvest drivers pick up the food in labeled aluminum trays and deliver it.
The whole idea behind Second Harvest and Harvest Kitchen is “self-responsibility,” said chef James McAllister of the Learning Enrichment Foundation of Canada.
Second Harvest ought to “spread across Canada,” McAllister said.
Second Harvest collects thousands of pounds of food each year from grocery stores operated by the Canadian Sobeys chain, which includes IGAs and Price Choppers.
Mike Murray, inventory and control manager at Sobeys’ distribution center in Whitby, Ontario, explained the company’s
involvement in Second Harvest.
“Part of our mandate at Sobeys is to give back to the community,” Murray said. “The price of living goes up, but your paycheck doesn’t.”
Sobeys gives out everything but fresh meat, said Murry. Much of what it donated is near the expiration date.
“When that shelf life (of the food) has only a few days before running out, the stores don’t want it so we give
it out to those in need,” said Murray.
Besides food donations, Second Harvest also depends on financial support from foundations and businesses like the Toskan Foundation.
Diane Elliot of the Toskan Foundation applauded the work Second Harvest does by reaching out to so many people.
“We are just beginning to address hunger,” Elliot said.
To resolve the problem of hunger in Toronto and elsewhere, Elliot cited a “need to bring back the government funding that has been cut back.”
Youth Without Shelter, a 30-bed teen shelter in the Etobicoke section of Toronto is one of 165 social agencies that get food through Second Harvest.
Brent Lawson, the food service manager at Youth Without Shelter, said Second Harvest is “one of our two largest food donors,” providing all the meat and bread and all the summer produce the shelter uses.
“The program is amazing,” said Lawson.
The help from Second Harvest is critical, Lawson said, because of the shelter’s tight budget.
“A lot of food is out there,” said Lawson. “It’s just a matter of getting it to the people.”
In addition to the daily food deliveries, Lawson gets calls to pick up food from other places.
For example, he said, he said he might get an order to “go and get 75 or 100 pizzas” from a restaurant.
In addition to donations of food and cash, Second Harvest holds several fundraisers each year.
Toronto Taste, a summertime event, is the largest, representing a third of the organization’s budget, according to Jones.
“We always say in the office that we want nothing more than to be out of business,” said Jones.
But until then, Jones, her staff, volunteers and donors will continue to try to keep hungry people fed in the greater Toronto area every day.