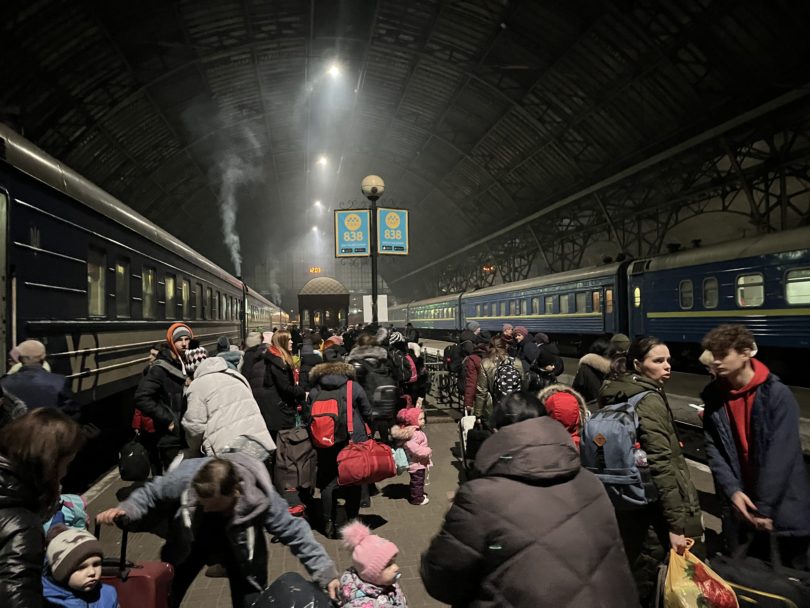 Lviv, UKRAINE – At the beginning of March, the war situation in the Kharkiv region grew more tense. The nearby city – Izyum, which is only one hour’s drive from my city of Lozova – was under Russian attack.

My family and I made a difficult decision – I needed to get evacuated abroad while it was still possible. Since both of my parents are working in the military and they couldn’t leave their jobs, I talked with my cousins Maria and Kira and we decided to go together.

Online I found a volunteer organization that helps Ukrainian refugees go to Spain and provides them with necessities and a place to live.

We first needed to go by train to Western Ukraine and cross the border with Poland. We were supposed to meet with the representatives of the Spanish NGO at the border.

The ride on an evacuating train from my hometown, Lozova, to Lviv took 30 hours.

In the small compartment with places for only four people were 13 of us, including kids, a 1-year-old baby and a big dog named Jack. We were lucky that we had a chance to sit because some people stayed in the vestibule the whole time.

As we got to Lviv, the railway station was packed with thousands of people, Red Cross volunteers and police. Everyone was in a rush trying to help the refugees, giving them food, drinks, clothes, and transportation to the centers where they could stay or travel to another place.

The girls and I stayed at my friend’s house for a couple of nights. After that, we got a taxi to the border crossing in Shehyni, Ukraine.

Hundreds of people were coming, too – by buse, car, or on foot. As we crossed to the Polish side, we met volunteers from around the world – England, France, Korea, and more.

They all provided people with food, medicine, personal hygiene products, SIM cards, and even dog treats for those traveling with pets. People and police always asked whether we needed something, if we were sure where we were going and warned us about safety.

We also met high school students our age who were volunteering there and helped us to get on the bus to Przemysl, Poland, the closest city center.

We walked about two kilometers (a little more than a mile) to the refugee center. It also had all the necessary stuff for people, including places to sleep.

We met with the Spanish organization’s representatives and were told to wait for the bus together with 100 more people who were going with us. But during the day the departure time kept changing, from 12 p.m. to 6 p.m. and then onto another day.

We were tired and confused, but there was no way back. We managed to leave the center the next day at 2 a.m., but not everyone got on the bus because of a misunderstanding with the bus drivers. Some had to wait for two more days for their buses to come.

Our way to Madrid, Spain, was through the Czech Republic, Germany, and France. We were on the road for three days, spending the first night in Germany in Run on the Pegnitz.

The sports school where we stayed had a place to sleep and shower and local volunteers prepared a lot of German food for us. We were grateful to finally have some rest.

We spent the next night in France in Nimes at the Paloma music venue. There we also had everything to feel comfortable and take a break. We also met very friendly journalists from local TV and radio stations, who offered us help in France and their contact information.

On Friday, March 18, we got to Madrid. In the refugee center, we were told that since all of us are 17, we could not stay without a legal guardian, and that we would be placed in different families.

We didn’t expect that since, in Ukraine, you get some independence right as you turn 16. And, of course, after leaving our families in Ukraine, we didn’t want to be separated from each other.

Luckily, Spanish volunteers accompanying us during the whole trip decided to help us. They talked with their families and friends and decided to become our host families until we turned 18.

Currently we are living at the same apartment block in Las Rozas Village, near Madrid in different families, but still very close to each other.

Tanya Tkachenko is a Junior Reporter with Youth Journalism International.

Early in the Russian invasion into Ukraine, YJI student Tanya Tkachenko offered a firsthand account of life in her city of Losova, Ukraine. Read it here:

A student reporter from inside Russia shared their frustration. You can read it here: