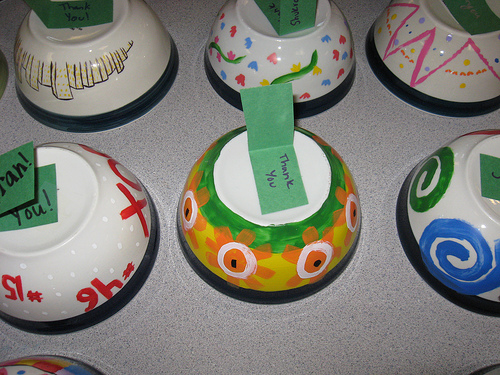 BRISTOL, Connecticut, U.S.A. – It may be difficult to comprehend the horrors of the genocide in Darfur, but with fundraisers like Project Empty Bowl it is not difficult to help the victims.

After seeing the devastation in the video, the burned villages and thousands of displaced refugees, the St. Paul students were compelled to help. 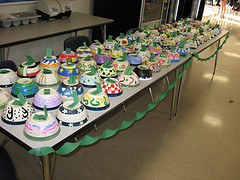 Last month, participants and supporters gathered in the school’s auditorium to watch the video made by the Danbury High School students. St. Paul juniors Jenny Moran and Leah Maier and senior Nadine Fentner spoke about the genocide that’s been going on in Darfur since 2003.

According to their research, 357 people die a day in Darfur. Organizers draped a paper chain with 357 links from the cafeteria ceiling in remembrance of the victims who lose their lives each day as a result of starvation and thoughtless killing.

For a five dollar donation, participants were able to select the bowl of their choice to bring home and were given a separate bowl of soup to enjoy at the event. Each ceramic bowl had a green tag on the bottom that said “thank you” and “shukran,” which means “thank you” in Sudanese Arabic.

Melissa Rimcoski, a 17-year-old junior at St. Paul, and five classmates made the chicken noodle soup from scratch.

Rimcoski said she “wanted to get involved” and was pleased her passion for cooking enabled her to do so.

Although Rimcoski was unsure of exactly how many gallons of soup she had made, it was evident that a great deal of effort went in to preparing the meal.

“To help support the cause, people are buying not only one, but two or three bowls,” Audet explained.

According to Michelle Contreras, 18 and also a senior, the purpose of the event was not only to raise money, but to spread awareness about world hunger.

Contreras said the issue of hunger in Darfur “is not as well known, so we want to get people more involved.”

Being involved in this event had a profound effect on the students, Contreras said.

“I think it makes us not take things for granted. We learned to cherish the food we eat and the lives we lead.”