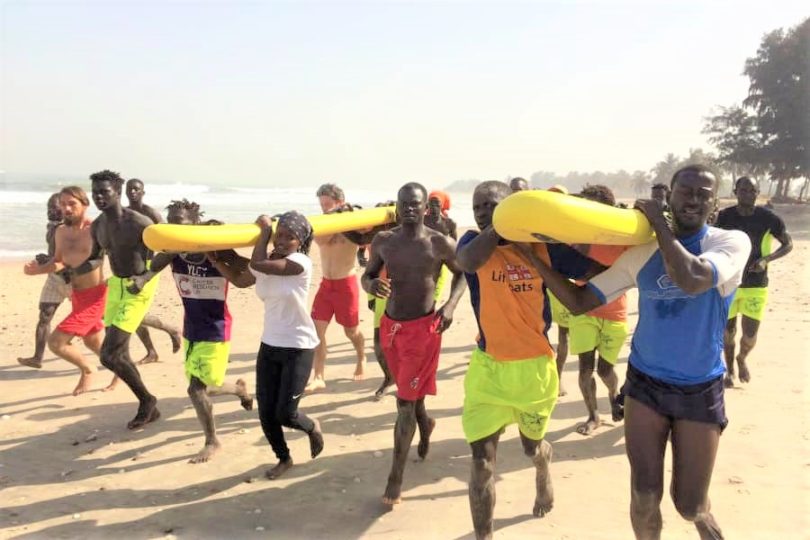 Lifeguards from the Red Dolphin Lifeguard Association in training on a beach in The Gambia. (Lama M. Jallow/YJI)

Palma Rima Beach, Banjul, THE GAMBIA – Years of frustrations, lack of adequate support, mistreatments and financial mis-managements led the Red Dolphin Lifeguards Association of The Gambia to stage a demonstration against their executive board to step down earlier this year.

Their courageous efforts did spur a leadership change, but their celebrations might be cut short.

A letter without an official logo – not standard in the eyes of the lifeguards – reached Momodou Lamin Jammeh, the newly elected president, from Sang Sylva of the office of The Gambia Tourism Board Control Unit. It challenges their new role as leaders and claims the former officers remain in charge.

“I am not surprise,” Jammeh said. 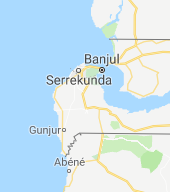 Gambia, a small country in northwest Africa, has a lot of beaches on its coast. (Google Map)

This letter came after the lifeguards elected Jammeh and other new executive members to replace the former board, who are currently under investigation for alleged misused of the organization’s funds. The new board is already holding both executive and general meetings.

An extract from the letter reads, “there has never been any clause in your constitution which stated that at any moment two executives will be running the organization concurrently after knowing fully well that the old executive is still recognized by the GT (Gambia Tourism) Board.”

Jammeh responded to the letter by urging the authorities to provide quick-answers as the busy summer swimming season with its popular ‘Summer-Jam’ event rapidly approaches. It will take time to organize and motivate the lifeguards to come to work at the beach to protect swimmers.

As it stands, they have not yet received any reply to their request but that does not bother the new executive board.

Reform – changing the leadership and instituting a system of payment for lifeguards – has been a long-time dream for so many of these youths volunteering at the Red Dolphin Lifeguard Association.

And Darren Teague, an instructor working with the Royal National Lifeguard Institute in the United Kingdom, who also carried-out training sessions with the lifeguards on numerous occasions, thinks the lifeguards made the right decision and commended their bravery in staging the demonstrations.

“I think it is very brave for the [lifeguards] to stand up for their rights in order to achieve change. This has obviously come about after years of frustration,” Teague said.

Lifeguards agreed that the responsibility and trust bestowed on them, and the important job they do, makes their work deserving of pay.

But that isn’t the case, although in a WhatsApp interview, Teague said he believes it should be a paid-profession and will encourage others to join the RDLA.

“By making lifeguarding a paid profession in Gambia more people would want to do it and more LG’s (lifeguards) can be provided on more beaches therefore preventing drowning,” Teague said. “The LG’s (lifeguards) do an amazing job on very dangerous beaches with very dangerous conditions and I am very proud of their achievements. I have witnessed them first-hand making rescues and saving lives.” 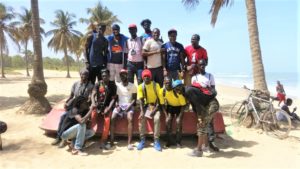 Some of the lifeguards of the Red Dolphin Lifeguard Association in The Gambia. (Lama M. Jallow/YJI)

“I couldn’t believe it that the lifeguards were not paid and the same goes to the tourists coming here,” said Anna Riggal, the newly-elected vice-president of the Red Dolphin Lifeguard Association. “That’s why the tourists don’t give them tips after coming-off from swimming at the beaches.”

Riggal, who lives in the UK but comes to The Gambia for holidays, encountered the lifeguard group after her husband was rescued by one of the lifeguards last year. Since then, her bond with the lifeguards has grown stronger.

Jammeh agreed that the lifeguard should be paid. He said getting payment for the men who work as lifeguards is among the group’s top priorities.

Poor management of the group’s finances led some of the lifeguards to reach into their own pockets to pay for important equipment to make saving lives easier at the beaches. Their contributions highlight the financial mismanagement of the former executive board, which is currently under investigation based on the allegations levied against them by the lifeguards.

There are big challenges facing the newly-elected executive board. They must regulate the organization’s finances, introduce a standard way of operating, move to make lifeguarding a paid-job and most important, combat the ever-challenging issue of drownings in The Gambia.

Teague has a strong faith in the lifeguards and their newly-elected executive team.

“Mo Lamin (Momodou Lamin Jammeh) is a very experienced LG (lifeguard) and very well educated and organized,” said Teague. “I think the new executive team are very passionate and will strive to achieve their goals.”

The importance of the lifeguards in making the beaches a safer place for both Gambians and tourists.

Riggal stressed the key role that lifeguards play in making the beaches safe for Gambians and tourists.

“Oh, they’re so important. They’re the most important thing. Because if people start to drown when they come to The Gambia, who is gonna come to Gambia?” Riggal said. “For me, I have my husband because of the lifeguards. We’ve been together 40 years. I didn’t wanna lose him.”

Drowning is a primary concern

Bringing fresh energy and motivation, the leadership change is a big step towards achieving transparency and a brighter future for the Red Dolphin Lifeguards Association, many lifeguards said.

Stationed at Palma Rima Beach in the town of Kotu, Seedy Bojang is one of the lifeguards responsible for saving lives at the beaches. He was in his rescue uniform, with a torpedo in his right hand as he led the way to the Red Dolphin Lifeguard Association’s location at Palma Rima Beach. 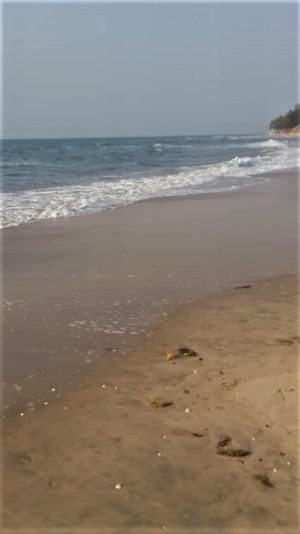 At the Palma Rima Beach, located in Kotu, Western Gambia, the lifeguards happily related their stories, and told how the change at the top could help them have a standard lifeguard association.

Their successful removal of the former executive board coincided with a drowning incident at the Lebato Beach in Fajara, where the victim lost his life. Lebato Beach is about three miles, or almost five kilometers, from Palma Rima Beach, where the Red Dolphin Lifeguards are primarily working.

Drowning is a major concern issue for many people but most importantly, for the lifeguards.

Bojang assured the general public that he and his fellow lifeguards are doing their best to stop drownings from occurring.

But it takes more than just the willingness of the lifeguards to stop these tragedies.

“Each hotel, bar or restaurant should have at least one or few lifeguards from the RDLA to help in case of any drowning incident,” said Bojang.

Jammeh, the newly-elected president, fully welcomes cooperation with the hotels, bar and restaurants located at the beaches. He promised to approach them “for the greater good.”

Cooperation is one major solution towards solving drownings but most important, Gambians and tourists need to always enquire from the lifeguards about the conditions of the water before swimming.

“The hotels and everybody need to take more responsibility for explaining to the tourists, although the sea is lovely and good fun, there is a dangerous element,” Riggal said. “Only last week the guy at the beach lost his life. And so, the tourists, it needs explaining clearly to them that they can enjoy the sea, but they must be careful and must listen to the lifeguards.”

On that note, Jammeh highlighted the need for support to make the work of the lifeguards easier, especially with regard to rescue gear.

Having proper equipment is crucial to doing the job, according to Jammeh, and is one of the main challenges they’re facing.

Teague and others from the Royal National Lifeboat Institute are planning to help the Gambian lifeguards.

“We will also be sending equipment out for the new season as they are also lacking in what they need to do their jobs to their best abilities. We are partnering with Aid2gambia and the big smile project in order to achieve this.” 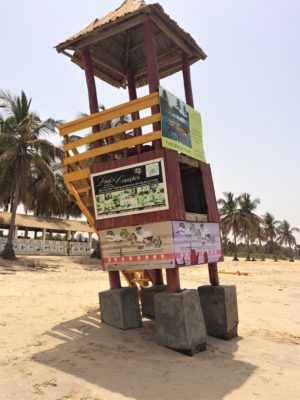 The Red Dolphin Lifeguard Association has carried out rescue operations in The Gambia for more than a decade.

Teague encourages them to keep up the excellent job “in time they will be rewarded for their endeavors. I am very proud of them all for their dedication and for the lives they have already saved.”

Teague explained the dangers the beaches in The Gambia pose.

“It can’t be said enough how dangerous the seas can be in Gambia. As an experienced waterman I myself got caught in a strong rip and without my own knowledge of how the seas work could quite easily of panicked,” Teague said. “They are in there every day and can pass on their expertise to all that visit the beaches in The Gambia.”

Jammeh had some words of advice for those who want to swim at the beaches in The Gambia.

“I would advise if a Gambian or tourists that would like to use the sea, if you see a lifeguard post please come close talk to them, ask them the sea conditions,” Jammeh said. “And do please adhere to the advice you’re given, because it is for your own safety.”

See an earlier story outlining some of the lifeguards’ concerns.

Lama M. Jallow is a Correspondent with Youth Journalism International.