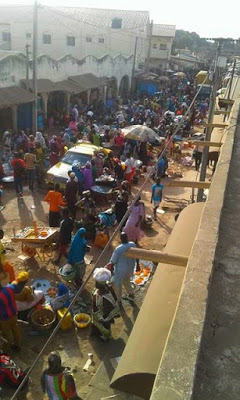 Gambians crowd the market in Serrekunda to buy food and other necessities to prepare for uncertainty after President Yahya Jammeh indciated he would not accept the results of the Dec. 1 election, which he lost. (Lama Jallow/YJI)
SERREKUNDA, The Gambia – Less than two weeks since Gambian voters chose a new president in an upset that thrilled youth here, the nation’s longtime leader is rejecting the
election results, stoking worry and fear among citizens.

President Yahya Jammeh openly rejected the results of the Dec. 1 election on national television Friday evening – exactly what many people here feared he would do.

It’s a reversal for Jammeh, who had initially conceded defeat to Adama Barrow, leader of a coalition party.
Jammeh, who has held power for 22 years, shocked the world by accepting defeat and congratulating Barrow and his team, indicating there would be a peaceful, democratic transfer of power.
But now Jameh is claiming the Independent Electoral Commission of wasn’t honest and completely favored Barrow.
Adama told TFM, a television news network in Senegal, “If there is a president in The Gambia then it’s me, period.”
People here are concerned – given that Barrow said he is the only president and Jammeh is denying the election results – about a possible clash between supporters of Jammeh and Barrow.
Soliders with weapons are currently positioned on all the checkpoints in the country. That is a sign of readiness for anything that will come.
Apparently worried about unrest, people are crowding the market, busy buying food like they did before the elections.
Jammeh is calling for a repeat of the election but has not set a date.
He said there will be no demonstrations, indicating that anyone who takes to the streets will be arrested.
Barrow is to take office next month. It is unclear what will happen between now and then, or afterward.
Lama Jallow is a Senior Reporter for Youth Journalism International.