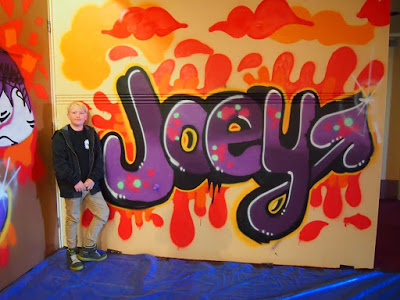 Joseph Smith, who took part in the hip hop festival, was proud of his graffiti. (Jack Ward/YJI)
ARARAT, Australia – When the Ararat Hip Hop Festival rolled into town, it transformed the local performing arts center, filling it with youth from near and far looking for a weekend of fun. 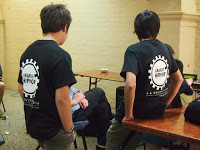 High school students watch an explanation by Pang Prouductions. All the boys at the Pang Productions workshop then decided to go digging which involved venturing over to the op shop to buy vinyl records. (Jack Ward/YJI)

Workshops, demonstrations and performances took place with some of the industry’s best, mentoring the next generation in hip hop music. 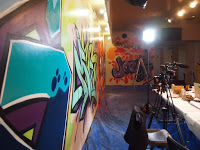 Joe Snow ran a workshop on graffiti, which proved one of the most popular. Participants came up with some design ideas and then translated them to the walls of the center’s foyer.
Joseph Smith, a sixth grade student at Ararat West Primary School spent most of his weekend with Snow, bringing his creative ideas to life.
Smith said that his mum suggested he attend the festival and he thought it was a great opportunity.
Smith wasn’t just a star at graffiti. He also showed his talent onstage by beatboxing and singing before claiming a prize at the end of the festival.
The November festival drew about 130 boys and girls, though the majority were boys. They came from as far away as Melbourne. The event aimed to engage local and surrounding area youth to learn to be the new creators of the future with skills and confidence.
The festival didn’t just attract school aged kids. Some young adult artists traveled from Bendigo to learn from Pang Productions.
Pang Productions started off their workshop by discussing their interest in making beats and rapping, with some sharing that they make their own music and hold gigs.
All the boys at the Pang Productions workshop then decided to go digging which involved venturing over to the op shop to buy vinyl records.
They then made their way back with about a dozen records before taking samples, or parts, of the songs and making their own. 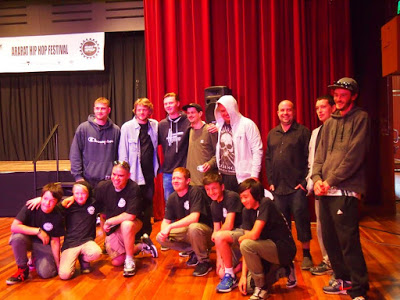 Some of the festival leaders and participants. (Jack Ward/YJI)

There were also many budding break-dancers who loved the opportunity to be mentored by two of the Passion Purpose dance school teachers.

KG, a teacher and artist who uses only initials for a name, spoke with the teenagers involved, telling them that he is spreading the positive aspects of hip hop. He followed up by teaching them a routine.

Festival producer Chichi Nwokocha said she’s hoping for an even bigger crowd next year.
“We would have loved some more numbers, but in small country towns it’s kind of the way it is,” Nwokocha said. “It is our first pilot year as well, so we are hoping next year will be bigger and brighter as lots of the kids that were here had such a great time!”
Jack Ward is a Reporter for Youth Journalism International.
***
Your tax-deductible contribution to support young writers
will make you want to dance!
Thank you for being generous with your support.
HelpYJI.org