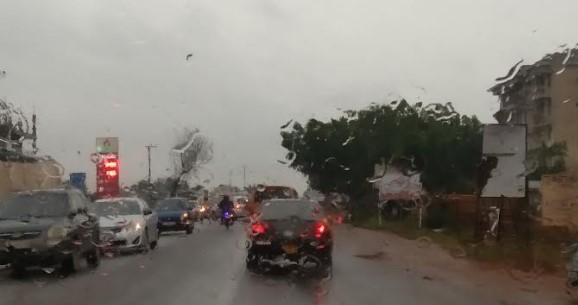 A small side road in Accra during the rainy season. (Mayama Opare/YJI)

Accra, GHANA – Massive rain that began last month caused terrible flooding in some parts of the city and a lot of damage. The rain is still falling and the problems are growing.

The rain fell heavily throughout the night starting May 24 and the flooded homes prevented people from going about their normal duties.

Ghana is entering its rainy season, so the flooding was not a surprise. Parts of Accra, like Tema, Kaneshie, Adabraka and Nima got flooded, and it was very  serious in Nima.

The rain carried away ramshackle structures, cars and other property.

My classmates were not able to come to school because they were disturbed by the flood and because thunder and rainstorms made it unsafe to go out.

Out of the usual 30 in my class, only about 10 attended that day. I was lucky and able to attend because my parents dropped me off.

Despite the fact that flood is a natural disaster in Ghana, the actions people take make it worse. People constructing their houses on flood plains, illegal mining and improper farming practices can cause floods.

Every time it rains, Nima floods due to the improper arrangements of settlements.

But people build anyhow, blocking the space for water to drain. You can be walking on the roads of Nima and end up walking into someone’s room or compound because they simply constructed a house in the road.

So what are we doing to curb the disaster?

Ghana must put measures in place to control the eruption of floods, which bring loss of property and could even mean loss of life.

Mayama Opare is a Junior Reporter with Youth Journalism International.

Mayama Opare is a Junior Reporter with Youth Journalism International from Accra, Ghana.