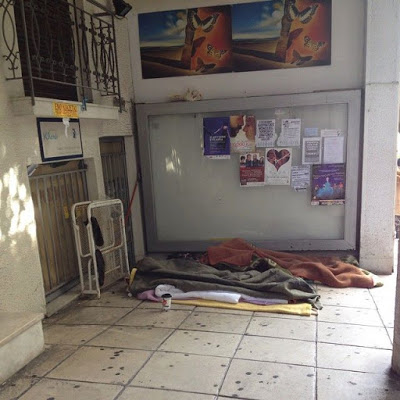 Eleni Grigovits / youthjournalism.org A homeless man's blankets on Kolonaki Street, in the center of Athens. Since the first years of the economic crisis, Greece has seen a vast increase in the number of people living on the street. (Eleni Grigovits/YJI)
ATHENS, Greece – Greece is again facing a huge economic crisis. This time, it’s probably facing its biggest one in modern history.
Last week, Prime Minister Alexis Tsipras – elected only January 26 – announced that Greece would have a referendum to decide whether to take a new deal proposed by the European Union and the International Monetary Fund.

Greece has been struggling with this economic crisis for several years and people are upset.
Since May 2010, when George Papandreou served as Greece’s prime minister, the IMF and European countries using the euro have been providing financial support to Greece.
This economic adjustment program is in the context of the sharp deterioration of Greece’s financial condition.
The aim was to support the Greek government’s efforts to restore fiscal sustainability and to implement structural reforms to improve the competitiveness of the economy. The plan was supposed to lay the foundations for sustainable economic growth. 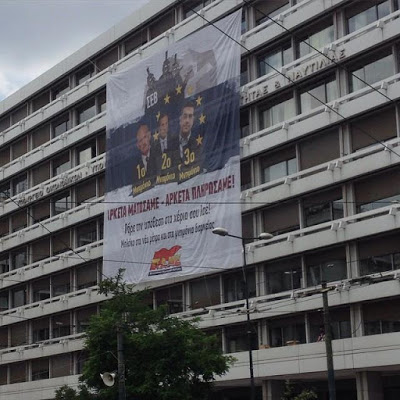 In this June photo, a sign written by the class trade union movement PAME (ΠΑΜΕ), which means “Let’s go,” hangs on the Ministry of Economy in Athens. The banner states that the new government will sign a new agreement that will lead to new cuts and austerity measures. (Eleni Grigovits/YJI)

As the years passed, governments changed, but the economic agreement turned into an endless sequel.
Greeks have now endured five years of austerity – which in real terms, means poverty, high unemployment in all age groups – but especially in the younger workers between 20-25 and those over 45.

Taxes are high and all people, no matter how much they earn, pay lots of money to the government.
Health and education funds have been cut, and pensions for retired people, too.
Basically, the country has been taking loans for the last five years and struggling to pay them back.
By electing a new government in January, Greeks believed there was hope for better days to come.
Five months later, Greece has no money, is unable to pay its debt to the IMF, and its citizens – facing an uncertain future – are divided.
At ATMs, people are standing and waiting patiently to take their pension. But there is capital control and some days, the banks have been closed.
Since June 29, they’ve only been allowed to take out 60 euros per day.
On Sunday, Greeks have to decide if they say “yes” to an agreement with the European Union. A “no” vote rejects the proposed agreement and asks the government to negotiate for a better deal.
Greeks are worried. If the nation votes no, will it mean an exit from the euro and probably from the EU?
Will a yes vote mean more years of poverty and austerity to come?
One thing is for sure: Greece is once more in the spotlight, but for all the wrong reasons.
Eleni Grigovits is a Junior Reporter for Youth Journalism International.
***
Your tax-deductible contribution can help support Eleni Grigovits
and other students at this nonprofit at
www.HelpYJI.org