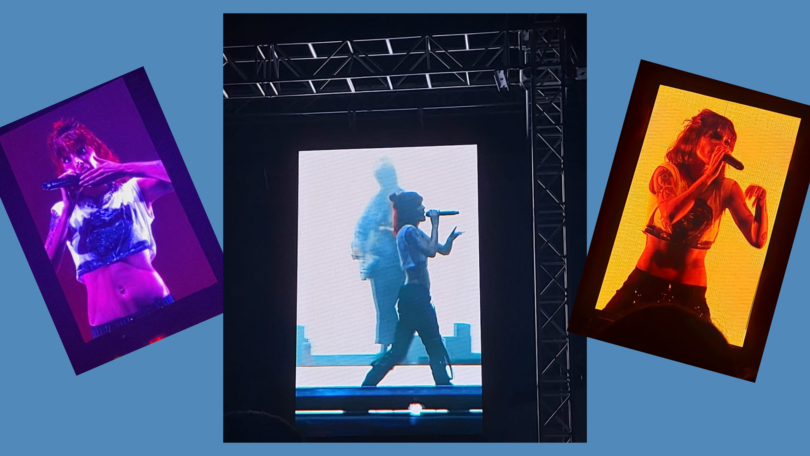 Halsey performs in Istanbul. (YJI's Naz Mergen made the photo on the left. YJI's Lina Köksal made the photos at the center and on the right. )

ISTANBUL – After being a fan of Halsey for years, I got lucky and was able to see her perform this month at her first show in Türkiye.

Her Istanbul stop was part of her international “Love and Power” tour that supported her 2022 album If I Can’t Have Love, I Want Power.

She told the audience that concert promoters didn’t want to book the big festival venue that would accommodate a large crowd, but that she insisted, believing that fans would come. They did – the show sold out soon after tickets went on sale.

Halsey, whose partner is a Turkish screenwriter, spoke many words in Turkish during the show, winning over her audience. It sounded so sweet to us when she said Türkiye is like her home.

It took us time to get to our places in the big grassy area where the audience would be. There were no seats – everyone was on their feet for the whole show.

We went to the concert at approximately 5:30 p.m. and we had to walk back to the line which took at least 15 minutes.  The gates opened at 6, but because there were a lot of people in line, we couldn’t get in the concert area till 8:30.

Halsey’s friend Abby Roberts, a British musician, opened the show. When we arrived, she had already started singing, but we managed to catch her last four songs.

Then there was a technical issue with the stage that delayed Halsey by about 20 minutes, but her entrance made up for everything.

She sang many songs and she even sang some songs which weren’t normally in the program because she said that she didn’t want to come all this way here and have a short show.

My favorite song she performed was ‘’Nightmare.” She talked about women’s rights while singing the song, and with her voice and the background photos, it was perfection.

She finished with another amazing song called, ‘’I am not a woman, I’m a god’’ and there were fireworks.

Even though the line was very long and we had to wait on our feet for awhile, the concert was an absolute blast and one of the best nights of my life.

Naz Mergen is a Reporter with Youth Journalism International. She wrote this review and made some of the photos.

Lina Köksal is a Correspondent with Youth Journalism International. She made two of the cover photos.