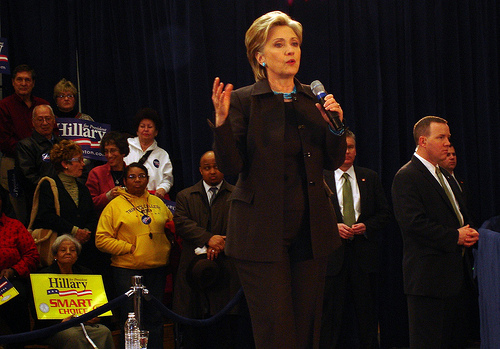 “It is about the state of the lives of the American people,” she said. “It is whether or not we have people who feel that they are moving toward the American dream or whether it looks like it’s getting further and further away, no matter how hard they work.”
Clinton, who is campaigning to be the Democratic nominee for president, also spoke about why the general election in November is a significant one in American history.
“We are at a turning point,” Clinton said. “I believe with all my heart that America is ready for an election that sets a new agenda, new priorities, that gives us back that confidence and optimism that should be our birthright.”
Hillary inspires some teens
To the excited and engaged crowd at The Learning Corridor, a Hartford magnet school that’s part of the Capitol Region Education Council, Clinton outlined her views on some important election issues.
She talked about the importance of education reform and creating a universal pre-kindergarten system, which she says will reduce the achievement gap between poor and underprivileged students by 50 percent.
“The next election is about the next generation,” Clinton said, and “the young people here today.”
Addressing the many young people in the audience who came to listen from nearby colleges and high schools, she said, “It’s about your potential.”
The presidential hopeful also said she would scrap the No Child Left Behind Act, signed by President Bush in 2002, and start all over.
“Our education is not just about taking tests,” she said, but about unlocking a child’s imagination and potential.
She said that with No Child Left Behind, slower learners and more gifted children are treated the same. If a poor-scoring school improves its standardized testing scores but still fails to meet the national requirement, it is not rewarded for its progress under the bill.
“We cannot treat children like they’re all cut out of the same mold,” she said, proposing the use of growth models for determining a school’s improvement instead of a national range.
Clinton also said she wants to make college affordable for people of the middle and working class, in part because of the United State’s competition with young adults from other countries.
She mentioned giving tax credits to students, taking on the “predatory lending practices” of student loan companies, and allowing students to pay those debts back based on a portion of their income.
The war in Iraq was a major issue that Clinton repeatedly brought up in her speech. She proposed bringing back one to two brigades a month from Iraq, then instating a “vigorous diplomatic engagement in that area.”
“Bush doesn’t do diplomacy. If he can’t send [Secretary of State] Condi Rice, it doesn’t get done,” said Clinton, smiling.
But all this must be planned out thoughtfully, Clinton said, which she said has not been the case in the Bush administration.
“Fail to plan, plan to fail. That seems to be the Bush administration’s hallmark.”
Along with this came a proposal to reform the way the government deals with veterans affairs. 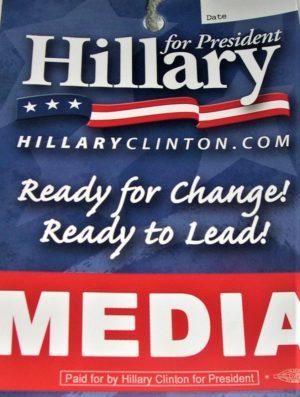 “I believe that when a young man or woman signs up to serve our country in the United States military, we sign up to serve that young man or woman.”
Clinton spoke of providing more jobs and better outpatient care for veterans.
One issue the crowd seemed interested in was global warming. When asked what she would do for the environment if elected, Clinton said she would push new funding for green buildings and efficient cars to make the US more energy-independent.
“Other countries are beating us,” she said, citing Germany’s push for energy-efficient technology.
The candidate also talked about her plan for universal healthcare. “Healthcare is a moral right, not a privilege.” She said that her plan would provide for lower drug costs.
“I think it’s imperative that this election be about the real concerns of the American people,” said Clinton. “Some people think politics is a game. It’s exciting. You can have rallies like this. But at the end, it’s about: are people better off when we stopped than when we started.”
Clinton said she appreciated being back in Connecticut. The senator, a graduate of Yale Law School, said that she and husband Bill used to travel all over the state in their spare time when they were students together here.
“We went from one end of the state to the other. It is such a beautiful state.”
Clinton said she was sure that, just as he has been doing for years, Bush would tell the country during his speech that night that the current state of the union is fine.
“But,” Clinton said, “with all due respect, Mr. President, you’re not on the road with me. Come and meet the people that I meet. Listen to the stories I listen to. Sit at tables in diners and hear what’s on America’s mind.”
Connecticut voters will cast their ballots in the primary on Feb. 5, known nationally as “Super Tuesday” because 24 states will hold their primary elections that day.
Clinton is locked in a tight race with Illinois Sen. Barack Obama for the Democratic nomination.
This summer, Democrats and Republicans will hold conventions and choose their candidates for the Nov. 4 general election.