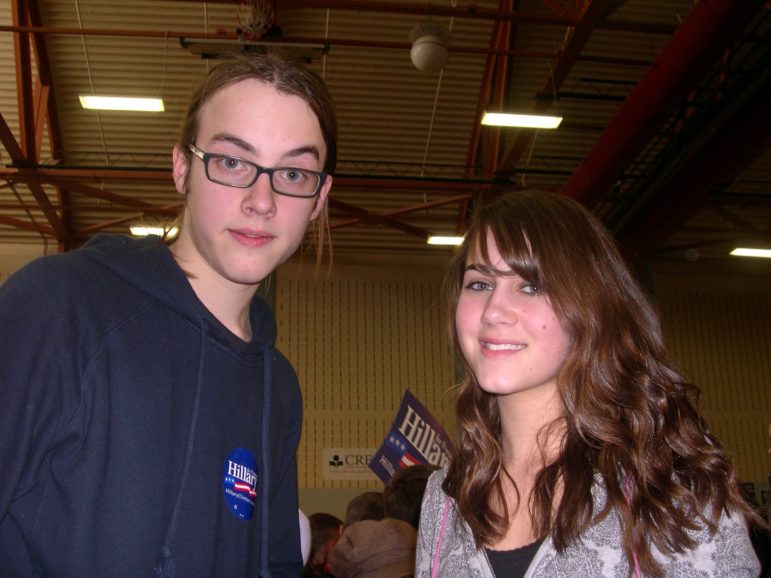 Atticus Kelly, 14, and Rayne McGlamery, 15, at a January 28 rally in Hartford, Connecticut for Hillary Clinton. (YJI)

Hartford, Connecticut, UNITED STATES — After listening to New York Sen. Hillary Clinton speak at her school, 15-year-old Rayne McGlamery decided that she, too, would like to lead the country.

“It was very inspirational,” said McGlamery. “It made me want to run for president.” 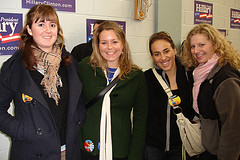 McGlamery, a student at Greater Hartford Academy of the Arts at The Learning Corridor, attended Clinton’s crammed campaign appearance in the school gym Monday morning with her classmates and hundreds of excited Clinton supporters.

Clinton, who is seeking the Democratic nomination for president, was greeted by a generally young audience, many of whom were from nearby Trinity College or an area high school.

“I want her to win,” said Dejesus. “If she does, it will start a whole new (era) for our country, being the first woman president.”

Bryant and Dejesus — both students at the Greater Hartford Academy of Math and Science at The Learning Corridor, part of the Capitol Region Education Council — got to miss some school to watch the speech.

“Just to see her and ask her questions is very exciting,” said Bryant.

Friends Chris Horn, 18, and Ben Jreczko, 17, both students at Simsbury High School, thought that the atmosphere was interesting.

Bustling the scene was. Crowds of people found their way to seats as Secret Service agents and Hartford security staff readied the area for Clinton’s appearance.

The excited crowd was younger than she expected for supporters of 60-year-old Clinton, Celeste said.

But Celeste thought this was a good thing.

Voting, said Celeste, “is our most important responsibility. The people who aren’t voting are making a mistake.”

When asked if she was a Clinton supporter, Shaw said, “I’m still undecided. That’s why I’m here.”

Although both Horn and Jreczko also said they were undecided who they will support in the election, Horn said, “I’m glad that there are young people here. It’s important to get young people involved.”

When the event officially began, it opened with an introduction by state Rep. Jason Bartlett, who co-chairs the Clinton campaign in Connecticut.

“We have the power to exert change in the White House by electing the first woman President,” Bartlett told the cheering crowd. “We have a chance to get our troops out of Iraq.”

Bartlett further rallied the audience by leading them in a chant of “Hillary! History!”

“Today is the day we make Hillary a Lady Husky,” Bartlett said, reminding the crowd of the popular University of Connecticut women’s basketball team. “We know our Lady Huskies win, and we know that Hillary knows how to win!”

“Stand up for Hillary! Let your voice be heard! Let us be Hillary’s choir,” said Bartlett, who introduced State Comptroller Nancy Wyman.

Wyman spoke of some of the issues that were not being addressed by the Bush administration.

“I’m often asked if people thought Bill would become president,” said Blumenthal. “But most of us thought Hillary was going to be president.”

Blumenthal said Clinton could effectively fight for healthcare reform and veterans affairs, and against warrantless wiretapping, which he said “the lowest administration of our history” has begun.

“She is a leader who will fight for change on day one,” said Blumenthal. “Her heart is with real people, with real problems.”

When it was all over, 14-year-old Atticus Kelly of New Britain, a freshman at The Learning Corridor, had a more cautious reaction to what Clinton said.

“I think she promises a lot but I’m worried about the upkeep,” said Kelly, “like if she’ll keep her word.”

Clinton’s Connecticut stop was to gather support before Super Tuesday, when voters in Connecticut and 23 other states will cast ballots in primary elections on February 5.

See also: What Hillary Clinton had to say in Hartford.

Rachel Glogowski is a Senior Reporter in Connecticut with Youth Journalism International.