After studying coastal and river systems for a year, I had the chance to travel from my school in England to Iceland with five geography classmates for six days over the summer to see examples up close.
Our adventure began on an early July morning.  While we were landing, the first thing I noticed was the change of scenery from British countryside to Iceland’s volcanic soil.
After a two-and-a half-hour flight, our teacher drove all the way to Reykjavik, the small Icelandic capital. We settled in the guesthouse right in front of the old harbor and then explored the old town.

To reach the city center, my five fellow geographers and I had to walk along the beautiful port, which was full of signposts that told the history of the harbor itself as well as the town of Reykjavik. In addition, there was a very colorful map that helped our small group find our way around.
After walking a little further, we finally reached downtown Reykjavik and the first monument we encountered was a church, called Hallgrímskirkja. This Lutheran church is the largest in Iceland. It was designed in 1937 with a 73-meter high tower, but was only finished in 1986.
We saw a famous statue of Leif Eriksson, an explorer who discovered America around 1,000 A.D., almost five centuries before Italian sailor Christopher Columbus.

The United States gave the statue to Iceland as a gift in 1930 to celebrate the 1,000th birthday of the Icelandic parliament, also called “Alþingi.” Created in 930 A.D., it is regarded as the oldest existing parliamentary institution in the world. 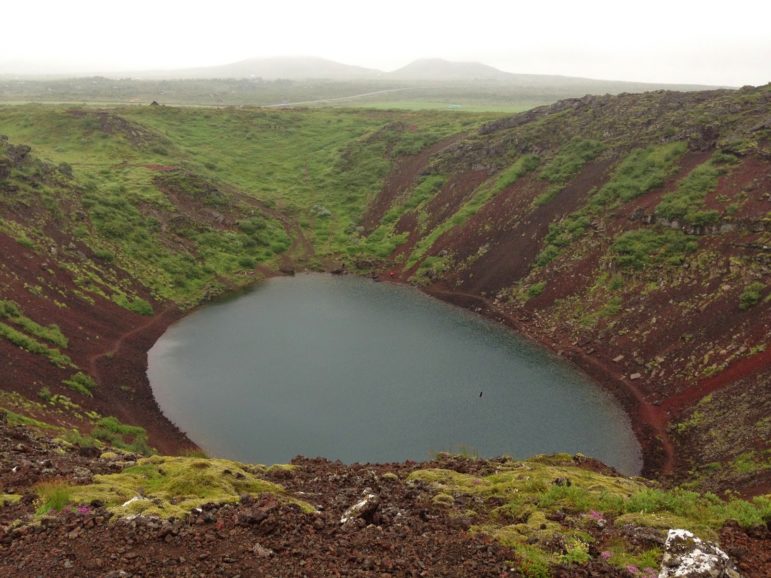 One of the peculiarities of Iceland when it comes to energy resource consumption is the fact that more than 80 percent of the country’s energy production comes from geothermal energy, which leaves the vivid smell of sulfur in the air.
Not only is geothermal used to generate electrical energy, but it is also used for other purposes. We noticed some small black structures on sidewalks from which steam was coming out. We found out that the steam made it possible for people to walk the streets of Reykjavik all year because it prevented them from freezing. In the winter, temperatures easily and often go below 0 °C (32⁰F).

The day after our arrival, my group and I were driven to þingvellar National Park, which includes Lake þinvellavatn, a lake with great geographical and environmental significance for its geological nature and high biodiversity.

Around 150 species of plants and 50 species of invertebrates have been found in the area. Þinvellavatn feeds into a river and ultimately, a geothermal power plant. The Lake Þingvellar area is also where you can see Althing, the remains of the old Icelandic Parliament. 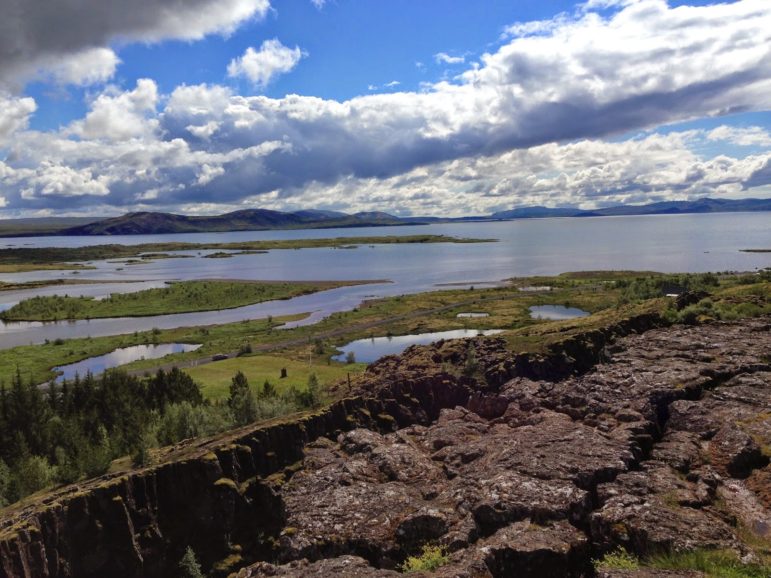 The temperature of the water on the river is very high and it is possible to see steam coming out of it. The channel travels all the way to Reykjavik, which is around 28 km, or 17 miles, away and supplies 40 percent of the water used by the capital city.

What is even more fascinating is that throughout the journey, the water,
which is at the boiling point, loses only a little bit of its heat while it is
transported to the city, thanks to several layers of insulating materials.

We then began our drive around the lake where we stopped multiple times
to observe the cracks in the plates that happened over centuries and were
shaped by tectonic movements. We also saw a beautiful waterfall.

On the other side of the waterfall, our geography teacher pointed out where the two continental plates of North America and Europe come together. At one place, the two plates were close enough for us to stand on both at the same time. When I did, it felt surreal.
The next day, we went whale watching. Unfortunately we only managed to see dolphins rather than minke whales on that trip. Later, we visited the Blue Lagoon, one of the most popular attractions in Iceland. It’s a geothermal spa located south-west of the island at an elevation of 230 meters.
Our next day was the longest. We drove all the way down to the south of Iceland where we saw two waterfalls and a volcanic beach.  We climbed to the top of one waterfall and we walked to the back of another.
The rocks and the sand have volcanic nature – hence the color black. The beach is a result of the erosional force of the sea.
We saw vertical rocks – geographically they’re called “stacks” – and a hole in a cliff called an “arch.” A long time ago they probably were a part of the cliff but waves slowly eroded them.
On the last day of our visit we went to see a volcanic crater and another waterfall.
The volcanic crater, called Kerið, is 6,500 years old and measures 270 meters
across. The surrounding land is made up of red volcanic rock.

The Crater Lake might have been formed by a collapse due to a magma chamber being depleted at the end of an explosion. The water in the crater is not rainwater. It’s groundwater, and therefore it corresponds to the water table.

Sadly, this waterfall was one of the last sights we visited in Iceland. After that, we flew back to England, taking with us memories to savor.
I know I will never forget the unconventional and breathtaking beauty of Iceland.
Martina Ghinetti is a Reporter for Youth Journalism International.