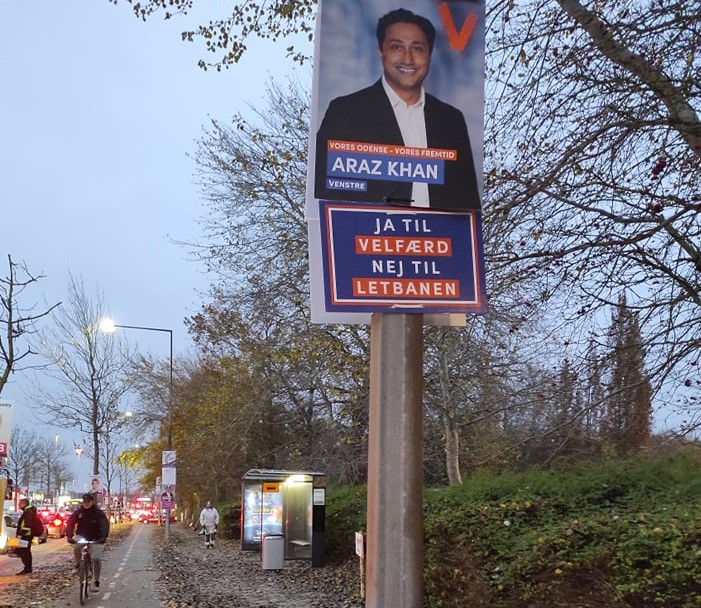 Political sign in Odense, Denmark reads, “Yes to welfare, no to the tram.” The creation of a new tram system is a key issue in local politics. (Amy Goodman/YJI)

Odense, DENMARK – Politicians here seek out the youth vote  – because young people here want their voice to matter, so they actually cast their ballots.

Many countries find it hard to get voters into polling stations for local elections, but Denmark has a strong turnout. Young people, a group that many countries find hard to engage, are notoriously engaged in politics in Denmark.

During election season, streets across Denmark are saturated with the faces and voices of candidates running for election in the city and regional government elections. Politicians target universities and high streets where young people congregate and hand out treats to attract attention.

In Odense, every lamppost is commandeered by the smiling headshots of potential candidates.

Each morning, as sleepy students arrive at their university campus, campaign groups greeted them, offering a breakfast bun or a branded cup of coffee.

Surrounding the town hall, local campaigners catch the attention of shoppers with their freebies, handing out anything from ice cream to hot cocoa – each accompanied with a flier promising a better city.

While this method of campaigning may seem aggressive, it makes sense once you look deeper at the Danish system.

Denmark’s coalition-based system means that voters have an abundance of options.

With so many voters to impress, and so many options available, it is understandable that candidates need to work fiercely to get the attention of their voters.

Lilleholt, who lost a bid to Odense’s next mayor in the Nov. 16 contest, explained why candidates use these tactics.

“Sometimes we give a little extra so that we can be the most convincing and get some more time with voters,” Lilleholt said.

Often, people may accept a flyer, but then throw it away before reading it, according to Lilleholt, but a tasty treat might give them pause.

“I don’t necessarily think there will be anyone who will vote for us because they get a pastry, but I think that we may get more attention, and a little more time to be considered,” said Lilleholt.  “Perhaps as they eat their ice cream, they will look at the back side (of the flyer).”

Young people are really involved in these local elections, which explains the swarm of politicians who visited the university campus.

Denmark is a country with very high trust in government. There seems to be a feeling among many young people that their vote does count, and that things can change.

It is also relatively common to find candidates in their 20s, something that might be seen as an anomaly in many other nations.

On the morning of the election, the local ‘student house’ – a supplier of cheap coffee, beer and social events – gave out free breakfasts and coffee to encourage young people to vote.

The same student house had also hosted a relaxed debating event running up to the election, where groups of young people drank beer and listened to the candidates’ various opinions. In some cases, the candidates and the students were the same age.

It is clear that youth votes mean something here, and the politicians know it.

While these elections focused on local issues, they represent Denmark as a whole; a clear pride in democracy, trust given to young voices, and perhaps strongest of all, a love of free coffee.

Amy Goodman is a Senior Reporter with Youth Journalism International.