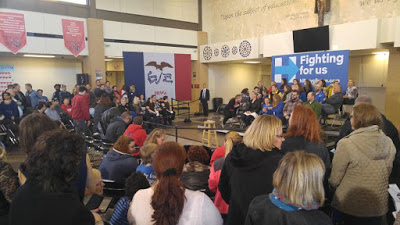 By Garret Reich
Reporter
Youth Journalism International
COUNCIL BLUFFS, Iowa, U.S.A. – What would it mean
for the United States of America to have its first woman president?
Less than a century ago, the United States granted women the right
to vote for president. Though a few women have run for president, the country
still hasn’t sent a woman to the White House.

Former U.S. Secretary of State Hillary Clinton, who is running for
the Democratic nomination for president – a job that also includes the role of
commander-in-chief – hopes to be the one to break through.
“The stakes in this election could not be higher,” Clinton told an
overflow crowd at Abraham Lincoln High School in Council Bluffs, Iowa.

Chelsea Clinton, 35-year-old daughter of Hillary Clinton and
former President Bill Clinton, sounded excited as she introduced her mother.
She said she was happy to have the opportunity to vote for her mother as well
as vote for the first time as a new mother herself.
In her speech, Hillary Clinton stressed importance of equal pay
for women doing the same job as men.
“We have to finally guarantee equal pay for women,” said Clinton,
who is endorsed by Lilly Ledbetter, a woman whose sex discrimination lawsuit
against an employer helped change federal law.
Ledbetter, said Clinton, was the “only woman supervisor at her
company when she learned that she was earning less money than the men
supervisors.”
But Clinton didn’t limit her talk to equal pay. She touched on the
economy, climate change and more.
“I want America to start setting these big goals again,” she said.
“It is time for us to think big about what we can do together.”
Clinton praised Iowa for its efforts to use clean energy.
“I have to thank you,” she told the audience. “You are already
getting one third of your energy from clean sources.”
Clinton, who is also endorsed by billionaire investor and
philanthropist Warren Buffett, said America does best with a Democratic
president.
“Our economy is better when we have a Democrat in office,” she
said. “You are four times more likely to have a recession when a Republican is
in the White House.”
The event, just one day before Iowans head to caucuses on Monday,
Feb. 1, drew about 350 people into the school gymnasium. More than 200 others
stood outside, unable to get inside.
In her quest to be America’s first woman president, Clinton spoke
about what the nation could achieve under her leadership, but didn’t make a lot
of lofty promises.
“I don’t want to over-promise and under-deliver,” said Clinton. “I
would rather under-promise and over-deliver.”
***
Your tax-deductible contribution helps students
supported by this non-profit charity. Thank you.
www.HelpYJI.org