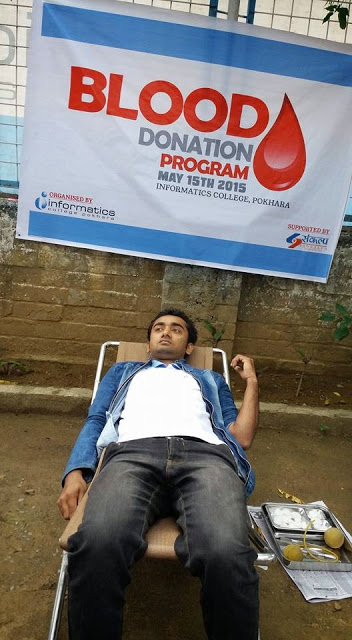 Nischal Kharel rests after donating blood in Pokhara (YJI)
POKHARA, Nepal – There is a saying in Nepali, Raktadaan, Jevandaan, which means Donate blood, donate life.” So of course I wanted to help by giving blood after a terrible earthquake last month killed more than 8,000 people in my country and left many more missing.

In Nepal, the victims and their families thank the donor and give blessings. Nepalese believe that if the patient gave a blessing then the blood won’t be wasted.
Since the earthquake, many victims in rural areas that are only accessible by helicopter or on foot still aren’t getting the help they need. People haven’t got food, clothes, medicines or even a tent. Rain and thunderstorms made the situation worse. Even small amounts of support can make a huge difference.

At Informatics College in Pokhara, where I study, students worked last week with campus administration to organize a blood drive. Out of a class of 65 students, more than 25 were ready to donate, many of them for the first time. We worked with the Sankalpa Foundation, a local organization started by senior students to help people get blood in times of need, and the Nepal Red Cross Society.
I was eager and excited for my first blood donation, and I woke up at 6:30 that morning with a new enthusiasm and strength. A friend picked me up and we went to the school together. When we arrived, I saw other friends who were already donating and they were smiling.
I was happy to see that strength and more excited about my own donation. A doctor asked whether I was taking antibiotics, if I drink alcohol, if I had a tattoo or if I had received any medical treatment recently.
After getting the negative answer for all those questions, he checked my blood pressure and weight and decided I was an eligible donor.
While I waited for my turn, I saw the happiness and pride on the faces of the other donors and realized that giving blood is a true way to help people. When they called for me, I laid down on a cot. After binding my upper arm with a rubber band, a health worker rubbed alcohol on my skin and inserted the needle. I squeezed a ball with my hand to encourage the blood to
flow.
After about 10 minutes, the bag of 350ml was filled and he took the needle out. He asked me if was feeling poorly, or weak.
I was feeling physically normal but I was much happier and satisfied after giving the blood. Actually I was feeling proud.
And after resting on the cot for about 15 minutes, I got up and volunteers gave me juice, fruits and a light snack.  I talked with my friend and then went home.
Humans have incredible power to do good – or bad. So let’s be wise humans and help each other in need.
The devastating earthquake that hit Nepal on April 25 left more than 8,000 dead, many missing and many more with food, shelter or clothing. Civilian volunteers from colleges, NGOs, INGOs and foreign countries are still working with the Nepalese army and police to rescue people.
Aftershocks are still being felt, and people are afraid. Many people whose homes are still standing aren’t sleeping indoors out of fear of aftershocks or another quake.
Those who were killed in the earthquake are dead but we shouldn’t let anyone else die of hunger or from need for blood, medical treatments or water. We must not leave them without shelter, either.
We gave blood because we knew the increasing number of patients in hospitals meant a certain scarcity of blood. We thought our little contribution could save someone’s life, so why not do it? This is humanity.
If we college students could help, than you can, too. Always remember, “A friend in need is a friend indeed.”
Nischal Kharel is a Reporter for Youth Journalism International.
***
Your tax-deductible contribution can help support Nischal Kharel
and other students at this nonprofit at
www.HelpYJI.org