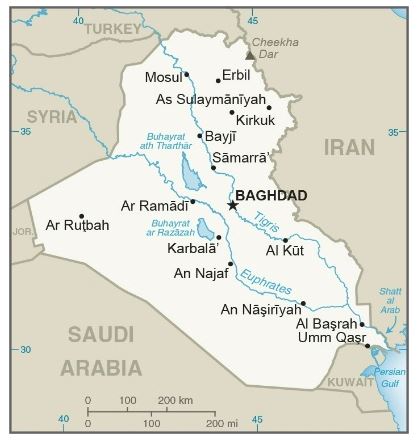 Erbil, IRAQ – Basra was once regarded as a thriving city where the Tigris and Euphrates rivers meet to form Shaat Al Arab, a larger river that pours into the Persian Gulf. Today, Basra’s economy is crippled by high-end corruption, foreign pressures, three consecutive wars and local uprisings.

Basra, a city of about 2.5 million between Kuwait and Iran, remains one of the richest and biggest regional suppliers of oil in the world, yet the current circumstances are devastating. The city is suffering from limited water supply and electricity, and most recently, limited freedom of expression.

The deadly protests in southern Iraq – which claimed at least 14 lives in the last two weeks, according to Al Jazeera – aren’t sudden or eruptive.

The causes that led to this tremendous anger and resentment by the people of Basra have been building up for the past few years. What makes these protests important is the government reaction to these events. That’s what shows that the real face of the Iraqi democracy is fragile, corrupt and destructive.

Protesters are upset because water and electricity have been scarce in Iraq, where temperatures can reach 122 degrees Fahrenheit. For the past two weeks, the people of Basra, later joined by citizens of Karbala, Najaf and Baghdad protested their dissatisfaction with the current water and electricity situation.

Many protestors are young high school and university graduates who cannot find opportunities or jobs.

Graduates of Iraqi colleges rarely find jobs with the government, which the majority of the people depend on for employment. It’s no better in the private petroleum sector, which is dominated by foreign petroleum companies, leaving no space for local graduates.

The difference between the wages of local and foreign petroleum engineers can be substantial due to the differences in their training. But foreign petroleum companies in Iraq seem reluctant to train Iraqi engineers. This is a big problem for the Iraqi economy since the vast majority of the country’s exports consist of petroleum.

In the city of Najaf, which is considered holy in the Shia faith, protesters stormed the Najaf International Airport, grounding flights, according to reporting in The Guardian.

The government’s response was to cut the internet nationwide in hopes of disconnecting the protest organizers.

One of the biggest demands of the Iraqi people is to end the Iranian influence on their government, resources and future. The Iranian influence in Iraq started after the American invasion in 2003, which left Iraq unable to fight the strong Iranian forces.

Iran has been eager to expand its influence in neighboring countries such as Iraq and Syria. But Iran’s involvement over the years has been devastating to Iraq. Iran formed militias in Iraq to establish pro-Iranian Shia dominance, which Saudi Arabia responded to by forming Sunni militias to fight the Shia. All this led to proxy wars in Iraq between Saudi Arabia and Iran, all disguised as sectarian violence and civil war.

But Al Abadi’s comments were received by continuous demonstrations and justified distrust as the central government has made many fake promises and ‘paper projects’ in the past.

Despite claims of massive investment by the central government, projects never happened, and money went to private pockets.

To make matters worse, Iran has cut its energy supplies to Iraq. Iran’s energy capacity has been affected by U.S. sanctions and the termination of the Iranian nuclear deal. Iran has also reduced or cut off its supplies to other countries such as Pakistan.

Al-Abadi responded by sending his energy and transportation ministers to Saudi Arabia, a move moving Iraq away from Iran and closer to Saudi and U.S. interests.

One explanation for Iran cutting off water and electricity to Iraq could be understood as Iran’s retaliation against the United States.
The only victims, though, are the Iraqi people.

Abdulrahman Al Rayyis is from Erbil, Iraq and is currently a university student in the U.S.