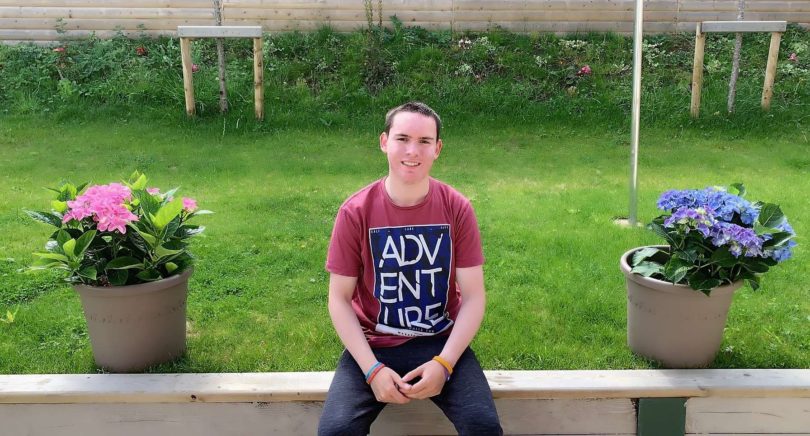 DUBLIN – While it was alien to most until early March, the use of masks and hand sanitizer is not a foreign concept for 16-year-old Benat Broderick.

Broderick, the Cystic Fibrosis Ireland ambassador, has been using both from a young age.

“I’ve been wearing masks from as young as six and I’ve been using sanitizer and so on from that age because with CF you have the risk of picking up bugs and cross-infection and stuff,” said Broderick. “I’ve lived my day as if I would with CF, but in a way that protects me.”

Life before covid was far from easy for Broderick. Cystic Fibrosis is a progressive, genetic disease that causes persistent lung infections and over time, limits the ability to breathe, according to the Cystic Fibrosis Foundation.

Living with CF, he was frequently in the hospital and it appeared that his health was beginning to deteriorate.

“Due to the nature of CF, we tend to get recurring chest infections, which the majority of the time results in hospitalization. Before covid, I was going in and out and I was quite sick. I was unfortunately beginning to see signs of progression.”

It was due to his deteriorating health that Broderick had a brief insight into the preparations of the Irish health service in anticipation of the pandemic that was a few weeks away.

“At the time, the end of February, I went into hospital, probably the worst I’ve ever been. I couldn’t breathe, I required oxygen 24/7,” he recalled.

“I was in for three weeks and that led into the first week in March. In February I was aware of the situation and probably because I was in hospital I kind of gathered the sense of concern, which was beginning to mount when I went in.”

Then about the third week, Leo Varadkar, who was then the Taoiseach, the Irish leader, announced that the whole country would be going into lockdown.

“I think the first moment for me was when St. Patrick’s Day was cancelled,” Broderick said. “It was very serious.”

The country descended into lockdown in the ensuing days. Times were difficult, with everyone making sacrifices for the common good.

Broderick, still hospitalized at the time, saw his routine thrown into the air as Crumlin Children’s Hospital shut its doors in an effort to curb the spread of covid-19.

“How it all began was that all visitors in the hospital were pretty much banned. No one could come in and no one could leave, in terms of patients. So that meant that no parents, no friends, nobody. All my normal routine – physios coming down to do airway clearance and that sort of thing – that stops.”

Mercifully, Broderick’s discharge from hospital was swift, but the next few months were difficult for him and his family. In the following weeks, he was advised by the government to ‘cocoon’ to protect himself.

“My mum works in the front line, she’s a nurse. She had to come off work because of the massive risk and the risk posed to myself,” said Broderick. “She came off work, and for six months we stayed at home, we didn’t go anywhere. That’s not to exaggerate, we didn’t. Then, come September, school went back again and I stayed at home. I haven’t gone back because of the risk posed.”

‘Cocooning’ didn’t have a positive impact on his overall health, either.

“With CF, the problem is, because it is a respiratory condition, exercise is a big part. Because I obviously wasn’t going out, I wasn’t able to exercise. Thankfully, I got a treadmill at the time, but I think overall it [cocooning] did more harm than good.”

With cases skyrocketing in Ireland once more, there are again worrying times ahead but with the vaccines on the horizon, Broderick is hopeful.

“I suppose it is kind of my last hope. Not only the protection. I’d still have to look after myself but I suppose it would just give me a sense of ease,” he said. “It’s kind of hard for those like myself who can’t really see a clear path in what I could do next. I can’t really see when I can go back to school, but I think the vaccine in the midst of all that’s going on is probably the only hope I have.”

It has been a long and difficult path and it is far from over. But the arrival of vaccines offer hope for Broderick and others like him.