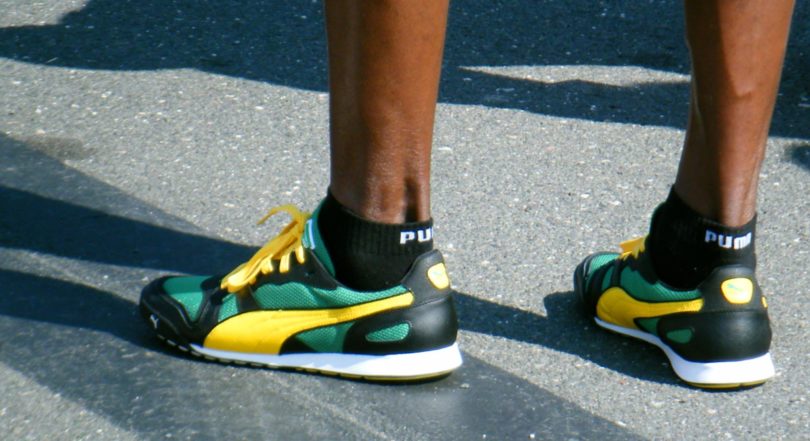 Usain Bolt's shoes, during an appearance at ESPN (KIernan Majerus-Collins/YJI)

JAMAICA – The intense Olympic fever is over, but Jamaican citizens are in no way showing signs of becoming anything short of ecstatic.

The phenomenal performance in the Bird’s Nest stadium in Beijing, China by the Jamaican athletes is like a virus that’s infected everyone in the nation.

I was and still am in awe that a tiny island called Jamaica – my home – could captivate the attention of the birds in the nest in Beijing.

Finishing 13th in the medal table out of hundreds of competitors with six Gold, three Silver and two Bronze medals for a total of 11 medals, we as Jamaicans are filled with pride at the remarkable job theses athletes have done to promote our country.

Though we congratulate all the athletes whether or not they have earned medals, we especially savor the achievements of Usain Bolt, who brought home three gold medals.

Bolt’s quest for greatness did not end until he had shaved the Michael Johnson 19.32 second record in the 200m event to 19.30 seconds.

Then, with his compatriots – including Asafa Powell, the second fastest man on earth – Bolt was determined to go for gold in the four-man relays. They did it in word record style.

I admire the work of these young women, most of whom grew up in rural communities with almost nothing or no one to motivate them.

Their success just speaks to the high level of intrinsically motivated people we produce.

Campbell-Brown, as well as Shelly-Ann Fraser, Sherone Simpson and Kerron Stewart are just some of the great Jamaican women athletes who wowed the world.

While there was much acclamation for the success of our “children,” as Prime Minister Orate Bruce Golding put it, Jamaicans have also suffered some amount of disappointment.

Powell, one of our favorites, failed to medal in the 100m men’s finals and the droppings in the bird’s nest by the Jamaican 4×100 women’s team was not about to break the vibe.

We are disappointed not in the athletes, but for the athletes, as we understand that they are only human, with the exception of Usain Bolt who is still being probed to confirm whether he is human or machine.

Celebrations are being planned by the Jamaican government, and special national honors will be awarded to Bolt, Powell and Campbell-Brown.

But the accomplishments of all our athletes are historical events which we intend to celebrate and savor.

The Olympics have been in the headlines every day here since the Jamaicans made their appearance, and I think that says something about the enthusiasm our athletes built up in this ‘likkle but talawah’ country (small but mighty country in Jamaican Patois English).

Tamari Miller is a Junior reporter for Youth Journalism International