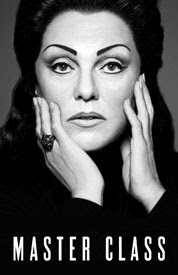 By Emily Couch
Junior Reporter
Youth Journalism International
NEW YORK, N.Y., U.S.A. – “Master Class”
is a Tony Award-winning play by Terrence McNally based on the famous master classes
that opera diva Maria Callas used to give at The Juilliard School in New York.
McNally’s words combined with a
magnificent performance by Tyne Daly in the lead role succeed in making Callas
a tragic, if not likeable, heroine who sacrificed everything for her art.

The setting of the play, showing at the Samuel J. Friedman Theater, is in an
unidentified auditorium and time with three hopeful opera students facing the
criticism of the formidable Madame Callas (as she likes to be called).
The clever set, designed by Thomas
Lynch, is quite minimalistic in comparison to most exuberant Broadway shows –
using a simple piano and a few chairs.
Even when we are drawn into flashbacks
at La Scala (Milan’s famous opera house), Lynch utilizes only the façade of a
pillar and a red curtain – mainly relying on lighting to create the atmosphere.
Unusually, with this play, instead of
creating a scene for the audience to merely observe, McNally has incorporated
the audience into the story.
Callas actually addresses the audience
as if they have come to watch a real master class.
At first, this may be quite disconcerting
as we are used to plays being confined to the stage.
At one point, Callas demands, “Can we do
something about those lights?” and you feel almost unsure whether this is
scripted or a rather awkward improvisation, but you find yourself gradually
warming to the style which makes the piece feel even more authentic.
Now, although Callas insists throughout,
“This is not about me, pretend I’m not even here,” it is obvious that McNally
intended his play to be about one woman and one woman only – Maria Callas.  The three students are inconsequential to the
development of the plotline itself, acting merely as triggers to bring out
Callas’ almost cruel yet tragic nature and reminiscence.
Daly, whose many credits include the
Tony Award-winning musical “Gypsy” and the popular cop show “Cagney and Lacy,”
succeeds marvelously in bringing La Divina to life, although she protested
about taking on the role of Callas at first.
“I haven’t had a lot of glamor requirements
in my career,” she told writer Henry Haun. “Have you noticed I play blue collar
a lot?”
Sometimes, you almost forget that it’s
not the great Diva herself who is on stage before you.
During the play, Callas has two monologues
in which we are thrust back into moments in her past: her debut at La Scala in
Milan, her romantic relationship with Greek shipping tycoon Aristotle Onassis
and her troubled relationship with her colleagues.
It is here that Daly shows the sheer
quality of her acting, moving seamlessly from playing a torn Callas to a rich
and crude Onassis. It almost reminds one of the Greek Pantomimes in which one
actor was required to play every part perfectly.
Daly also shows the complexity of
character and emotions perfectly.   We
can see the conflict between Maria the woman and Callas the artist because she
will constantly contradict herself. For example, she tells the students never
to look at the audience.
“It should be just you and the music,”
she says, yet when we see her flashback to La Scala Opera House, we see how
much she craves the adulation of the audience.
At one point, Callas shouts, “I hate the
word ‘Act’ – but ‘be’…”
Watching the play, it is abundantly
clear that Daly isn’t playing Maria Callas – she is Maria Callas.
McNally has written Callas such that, at
times, we want to both throttle her for her harshness to the students and give
her the affection her life so clearly lacked.

Scottish export Alexandra Silber (whose
credits include “Woman in White” and “Fiddler on the Roof”) plays victim number
one, the bubbly Sophia De Palma.
She has prepared a Bellini aria but no
sooner has the music started than Callas completely tears her down, criticizing
her posture, her listening and her expression.
Sophia clearly admires Callas and tries
desperately to ingratiate herself to her and impress her but all she gets in
return is cruelty, which eventually brings her to tears.
I felt a lot of empathy for Sophia
because, as a singer, I could identify with her desire to please and succeed.
A similar scenario happens to victim
number two, Sharon Graham, played by the incredible Sierra Boggess, whose credits
include London’s “Love Never Dies,” Broadway’s “Little Mermaid” and “Phantom –
the Las Vegas spectacular.”
However, when affable funnyman Anthony
Candolino, a tenor played by Garret Sorenson, (whose opera credits include “Il
Pirata” opposite Renné Flemming) sings, Callas actually allows herself to be
moved by the voice and the music which leads the audience to suspect it wasn’t
that the two sopranos weren’t good enough, but that Callas felt threatened by
their youth and talent.
But, after the tenor, who should come
back on stage? That’s right, the unsinkable Sharon Graham. She’s chosen Lady
Macbeth’s aria from the letter scene, which is perfect for her fiery attitude.
Unlike Sophia, she actually stands up to
Maria and has the guts to say what everyone is thinking.
“I don’t like you,” she says forcefully.
“You are just jealous that we are young and still have our voices. …You want us
all to lose our voices in 10 years like you! Well I won’t be like you! I hate
people like you.”
Here you feel conflicted. You’re happy
that Sharon has stood up to her, but knowing her past, you feel strangely sympathetic
to the diva at the same time.
Although not the best place for
listening to uninterrupted arias, I strongly recommend “Master Class” to all Broadway
goers, especially those with a love of singing or performing themselves.
You may find you learn some interesting,
sometimes cruel and inspiring ideas about the profession.
The show even includes some funny moments.
Clinton Brandhagen plays the small yet
comedic part of the disrespectful stagehand, creating a humorous contrast to
the cultured Maria.
The biggest laughs come, however, when
Callas herself tries to be funny.
With a tone-deaf sense of humor, her
“jokes” are so completely not funny to anyone but her that they end up leaving
the audience in stitches. They’re so bad that they’re good.
She accuses Manny the pianist, skillfully
played by Jeremy Cohen, of not having “a look.”
A “look,” she insists, is vital to
success.
“To any of you who have a look, I salute
you,” she tells the audience. “To those who don’t – get one.”
Yes, Madame Callas.