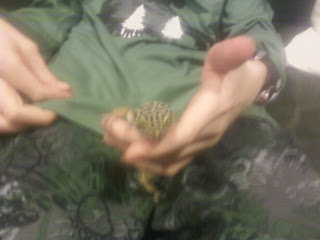 Even Steve, Erik's lizard, was excited to welcome 2011. Monica Blaze/YJI)

WIXOM, Michigan, U.S.A. – Most people are out on New Year’s Eve. Crazy parties top the lists of adults and even teens.

However, some teens aren’t as fortunate to be with their friends on New Year’s Eve.
Some of us are forced to babysit, and I was one of the chosen.
It wasn’t too difficult. The two boys, ages nine and 11, seemed to be able to entertain themselves.

So, lucky me, I was not only babysitting on New Year’s Eve, but remained amused by indulging in some quality homework.

The boys decided they would stay up until midnight for their first time. It was hard for me to keep them awake or monitor them. The hardest part was not allowing myself to fall asleep.
The eldest boy, Erik, did a good job waking me up as I edged my breaking point.
It was approximately 11:25 p.m. and I was still diligently working on my homework.
Just then, I felt a set of eyes looking at me. They were Erik’s.
When I looked up to see him there, I noticed another set of eyes.
To my surprise, there was a leopard-looking lizard on his shoulder.
To say the least, I slept with one eye open the rest of the night.
Dealing with this lizard was more than enough excitement for the most extreme girlie-girl.
We stayed up and watched the New Year’s ball drop in Times Square, New York. Not falling asleep until almost four in the morning, I was more than excited that it would be 2011.
Maybe babysitting was not the ideal choice of activity for the night, but I am very happy to start 2011 one hundred dollars richer – and a little bit closer to facing my fears of amphibians!
Monica Blaze is a Junior Reporter for Youth Journalism International.