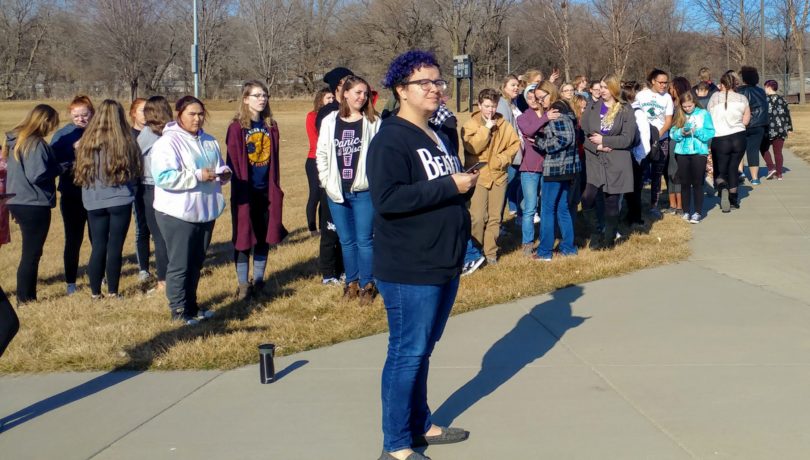 Student leader Ebony Belt waits for others to arrive at the March 14 walkout at Glenwood Community High School in Glenwood, Iowa. (Garret Reich/YJI)

GLENWOOD, Iowa, U.S.A. – The sun rose here on March 14 as it did across the rest of the country. To some, it was just another day. For others across the United States, this was the next step towards effective change.
In response to the February 14 shooting at their school in Parkland, Florida that left 17 dead, students from the Marjory Stoneman Douglas high-school advocated for a national walkout.

The Glenwood School District here in southwest Iowa was one of the many schools to get involved. The district set aside 17 minutes for those wanting to participate. Each minute was intended to represent each of the 17 students and adults killed in Parkland.
Nearly 70 students at the Glenwood Community High School attended the walkout.
At 10 o’clock, they walked across the parking lot and stood in front of the school’s soccer fields, a designated safe place for the protest. They embraced one another and took a place in the forming semi-circle.
Senior Garrett Koperski participated because he says “there needs to be a more careful background check on people.” He also walked out “because of the 17 people who lost their lives in Florida.”
Ebony Belt, a senior at GCHS, led the group.
“We are not here protesting every single gun. We are not here protesting that you shouldn’t have self-defense,” said Belt. “We are here protesting gun violence in schools.”
Belt began by reading the names of those killed in Parkland. She then invited the group to sit and honor those killed in 17 minutes of silence.

At a school walkout in Glenwood, Iowa on March 14, senior Ebony Bolt reads the names of the 17 victims of the February 14 school shooting at Marjory Stoneman Douglas High School in Parkland, Florida. (Garret Reich/YJI)

As she closed the walkout, Belt quietly thanked everyone who attended. The students clapped and began to walk back, looking encouraged and emboldened.
Senior Dani Kittle said she took part in the protest because she believes “it was terrible that all the innocent kids were killed.”
Teachers were allowed to attend but were told they must apply in advance for a sub for their classes.
School Principal Richard Hutchinson sent an email to staff and parents saying that “staff should not spontaneously abandon their teaching responsibilities and walk out while students were present.”
No teachers appeared for the walkout, but Hutchinson attended.
“As a school, we understand student’s rights and their Constitutional rights,” said Hutchinson, in an interview before the walkout.
He also went on to say that he “hopes that students that are protesting understand what they are protesting and why.”
At Glenwood Community High School, there were many that disagreed with the motives of the protestors.
“There is a better chance of them getting shot outside, then inside,” said senior Kara Murphy. “The people that walked out today have no physical or mental connection to the people that got killed in the shooting in Florida.”
Senior Kyle Gray said, “The people walking out on gun control really need to educate themselves.”
Others said students were right in taking a stand, but felt that disciplinary actions should not be overlooked.
Jay Anderson, a local candidate running for the Mills Country Supervisor seat, “While it’s important for their voices to be heard, it’s also important that their actions have consequences.”
In Iowa, the county supervisor oversees the operations of local governments. Anderson is passionate about improving the lives of members in his community and schools through the position of county supervisor.
“While it is their right to protest, it also their responsibility to be held accountable for time missed in the classroom,” said Anderson.
One Glenwood teacher – who asked that her name not be used because she feared repercussions on the job – said students were doing the right thing by protesting.
The idea that arming teachers is a solution to ending gun violence in school, the teacher said, left her “disgusted.”
“Gun violence is unacceptable,” said Kittle.
Garret Reich is a Correspondent for Youth Journalism International.

Want to read more? Here are the voices of YJI students worldwide since the Parkland, Florida mass shooting: After Parkland