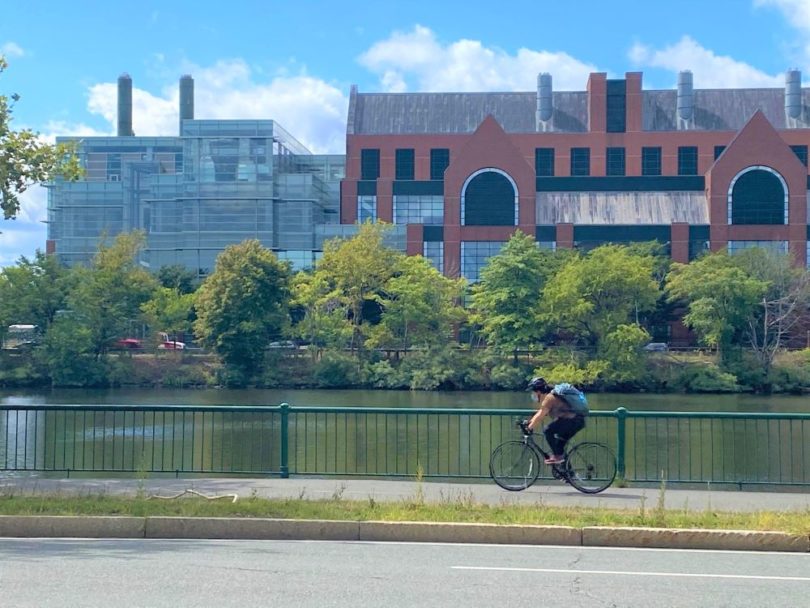 A bicyclist rides along the Charles River in Boston. (Katrina Machetta/YJI)

The worldwide pandemic may have put certain activities on hold, but for some youth, daily exercise has continued.

Exercise has always been part of a regular routine for some people, but others have taken the bonus time from quarantine to incorporate a workout into their lifestyle.

Binnet Roberts, 22, a student at the University of The Gambia, said she is making an extra effort to maintain her weight during the covid-19 pandemic.

It doesn’t matter what situation an athlete is in, Azimpour said, they always need to make an extra effort to exercise. If they don’t do anything and stay home and keep eating, she said, they will gain fat and lose muscle.

That was motivation enough for her to keep exercising and watch what she eats in the lockdown, Azimpour said.

With changes at school and many students switching to online classes, young people around the globe find themselves facing a general struggle to maintain good mental health.

Through a series of interviews with youth worldwide, reporters with Youth Journalism International explored the relationship between exercise and mental health, focusing on the changes that may have occurred during the covid-19 pandemic.

Many of those interviewed seemed to think that others are putting in extra effort to exercise and lose weight during the covid-19 pandemic.  But some admitted that their own priorities don’t include taking the time for exercise.

Stephanie Connell, a 12-year-old from Melbourne, Australia, said that she’s not dedicating time to exercise because she is busy enough.

Jonas Roi B. Amparo, 18 of Tagbilaran City, Philippines, said that although he is gaining weight, his body is still fit. Amparo also added that he really misses doing his jogs, and is only doing some small stretching for flexibility maintenance.

Crystal Palmer, a 20-year-old university student from Melbourne, Australia, said she hasn’t really been keeping up with an exercise routine, but is taking walks every day just to get out of the house.

It would have helped her mental health a lot more if she had put more effort in at the beginning, said Palmer, but she wasn’t concentrating on it.

Not going to work impacted the amount of exercise that some people have been doing during the pandemic.

Ben Trad, 21, of Melbourne, Australia, said not going to work means not walking to the bus, so he’s inactive for longer periods. Apart from this, he hasn’t really changed his lifestyle too much.

For some young people, worrying about their weight and body image has not been a problem during quarantine.

Li Zing Yi, a 15-year-old 10th grader from Beijing, spoke about how she is indifferent to this topic, explaining that she has never really paid attention or had to worry about weight. Therefore, she’s not putting any extra effort into exercising during the covid-19 pandemic, she said.

Beattie Pritchard, a 22-year-old university student from Chichester, England, said she’s never been someone who exercises much. She said she’s always been comfortable with her body.

Exercising is something she wouldn’t really ever put effort into, Pritchard said, explaining that she feels really fortunate that this isn’t something she is worrying about at the moment.

Sevgi Eda Keskin, 18, of Istanbul, said she uses walking programs on YouTube to do minimal exercise and get some endorphins in her system.

Anna May, 23, from High Wycombe, England, is thankful that her previous worries about body image don’t impact her as much anymore. She is also glad that during the pandemic, her relationship with fitness and weight has stayed fairly neutral.

May said she imagines that a lot of people will be feeling the strain, which she has managed to avoid.

During quarantine, May has been trying to keep exercising and eating healthily for the sake of her mental and physical health but isn’t doing anything more than she usually would outside of quarantine.

Some people are trying to share their exercise routines and keep others motivated.

“I’m simply trying to maintain a healthy lifestyle and I inspire my social media followers to do so,” said Maria Vitiadou,  a 20-year-old student from Athens, Greece.

This content circulating on social media can quickly turn into pressure and stress. For some youth, being expected to exercise and lose weight or become physically stronger during this time hasn’t been very motivational. Rather, it has had a negative impact.

Taylor Helwig, 14, of Ontario, Canada, said there is a general societal prejudice against people who don’t fit a cookie-cutter expectation. She also said that people are often not empathetic enough and don’t realize how others might be struggling with their body image.

Pegah Moradi, an 18-year-old student living in Stockholm, said she is exercising to prevent weight gain.

Exercising to lose weight or to prevent weight gain is common in young girls. This motivation can quickly turn into pressure.

Helwig said exercising during quarantine might have improved her physical health, but not necessarily her mental health. She calls herself a perfectionist, and the pressure of exercising can get too big sometimes.

“For example, if I break my routine and miss a morning workout, my mind will be preoccupied with that during the day,” she said.

Chambie Elliott, 15, of Klein, Texas is aware of how easy it is to get overly obsessed with exercise and is trying to keep a balance.

It’s easy to get pulled in and start being too hard on herself, Elliott said.

Some who decided to incorporate exercise and fitness into their daily lockdown routine said they experienced a positive impact.

Many stated that the mental health benefits are their main motivation.

Lara Caitlyn McGlone, 18, of Little Chalfort, just outside London, said exercise has allowed her to have a positive mindset.

Another Melbourne teen, 15-year-old Chloe Connell, said making an effort to lose weight over the lockdown period made her feel better about herself because she is aware of how hard she is working toward self-improvement.

Aliyah Kassam, 17, from London spoke about how she is trying to get fitter and healthier. She now has the time, Kassam said, and using it productively is a personal goal.

Such time can also be used to appreciate one’s health.

Antonella Cardoso, 15, of Quito, Ecuador, said it’s had a positive impact in terms of personal growth, gratitude and not taking things for granted.

Exercise has also been seen to provide a healthy release from a sometimes-daunting reality.

Before quarantine, 16-year-old Sarai Deese of Charlotte, North Carolina said she would skip meals on school days to save time. She pushed her body past its exercise limits, too.

Quarantine has actually greatly improved her relationship with her body, Deese said, because regardless of events happening in the world, she can focus on working out twice a day and eating three times a day.

Using time in lockdown to improve your relationship with yourself and find balance is a sentiment shared by Elliott.

Elliott said she’s taking advantage of time in quarantine to get stronger and more conditioned, but isn’t obsessing over it. She said it’s also important to get mentally and spiritually stronger.

Exercising in any form has allowed for some sociability in isolated times.

Blessy Josephin, 15, of Chantilly, Virginia, does classical Indian dance. While attending online dance classes is not as productive as in person, Josephin said, it still helps her to get out of bed, not watch Netflix and actually see people.

Exercising has been a source for wellbeing and relaxation for a few people. For others, exercising — or not exercising — has put a lot of pressure on them.

But either way, exercise has an impact on mental health, and perhaps even more now, when staying healthy is more important than ever.