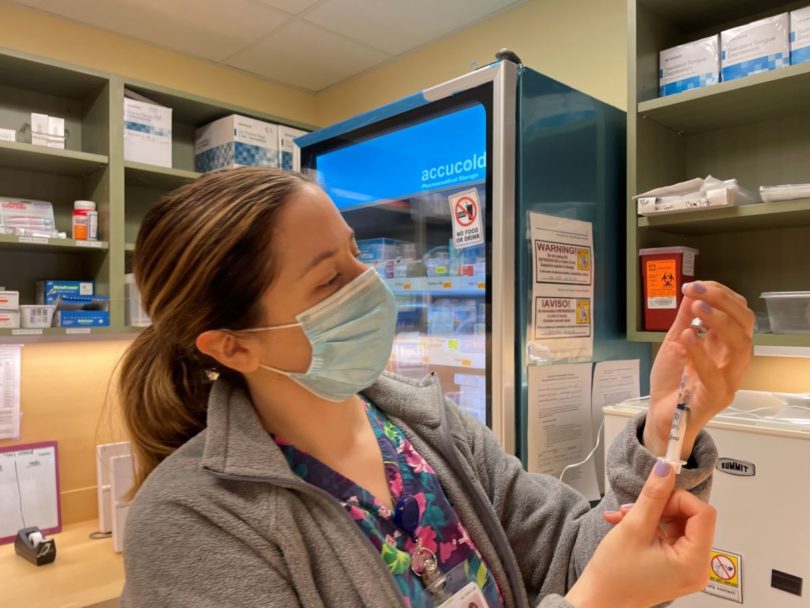 Clarksburg, Maryland, U.S.A. – Through a blurry video camera in her brightly lit home in East London, South Africa, Dr. Marichen Puchert, a medical officer in the city’s largest public hospital describes her staggering experience as a medical professional during the ongoing COVID-19 pandemic.

Watching patients enter her hospital with a massive range of ailments, from mild cold symptoms to life-threatening motor vehicle accident injuries and added respiratory issues, she grappled with the knowledge that many simply wouldn’t survive.

“Our critical care nurses would say,” she recalled, “patients were dropping dead like flies.”

The unexpected and harrowing covid-19 pandemic threw the whole world for a loop, sending millions into poverty and unemployment and more into the extremely lonely reality of self-isolation.

Among gripes of virtual schooling and online grocery shopping, the pandemic made the lives of medical professionals exceedingly dangerous and challenging.

Those who are spearheading our fight against this modern plague are battling some of the most fearful working conditions seen in hospitals and healthcare centers in decades.

In interviews with Youth Journalism International, Puchert and three other medical professionals working in New York and Connecticut described extreme exhaustion from the relentlessness of the work and fear for their own health and that of their families. They also expressed anger towards those who ignore basic pandemic safety protocols – like mask wearing – and especially those who deny that the deadly virus is a threat at all.

Kara Martin, a surgical technician in Connecticut, describes watching as her operating rooms became ICUs overrun with the sickest of the sick.

She recounted watching the National Guard set up billowing white tents outside her hospital a mere two weeks after the initial lockdown meant to house even more covid patients.

“Within two weeks, we went from everything being normal to our hospital becoming like a warzone,” said Marin. “I feel like we all have PTSD from this.”

Across the globe in East London, Puchert remembered her experience when the South African government first implemented a shutdown more than a year ago.

“I still remember the first day of lockdown, driving to work. It was just quiet. I’ve never seen the roads that empty, not even on public holidays,” said Puchert.

When the pandemic first began and most stayed at home, hospitals had one problem: covid-19. Without anyone traveling or partying, the number of serious motor accidents and assault victims rapidly decreased, opening up space for the hordes of pandemic patients.

Martin’s hospital in the United States immediately shut down all elective surgery within days of announcement of the first lockdown to make room for possible waves of COVID patients.

Dr. Courtney Pendleton, a neurosurgeon in New York, was also instructed to halt all elective surgeries, her hospital already overwhelmed with the influx of patients requiring intensive care.

“We didn’t do elective surgery because we just didn’t have enough beds or space,” Pendleton said. “We’ve had to put two patients in rooms where there should only be one.”

“People are catching up on all the partying they missed,” Puchert said.

With this massive influx of patients, medical professionals risked catching the deadly virus at every turn.

“It’s a lot of shared risk, and it makes you anxious,” said Pendleton. “You’re in close quarters and operating on this person with covid for five or six hours.”

Nurses, surgeons, and patients are constantly being moved from ICUs and trauma centers to covid wards, endangering every person that comes in contact with them.

“This past year, I’ve been horribly worried that I’m going to contract something and not know it and give it to my husband or kids,” said Martin.

Martin said she’s seen children – largely been proclaimed ‘safe’ from the life-threatening virus – have massive, fatal reactions to it. As a healthcare worker constantly exposed to the virus, Martin, like many others, debated living in a motel near her house rather than coming home.

“I just don’t know if that’s going to be my kid or not,” Martin said.

When the pandemic began and Puchert’s hospital was initially tossed into this turmoil, she couldn’t see her family for five months, despite living and working a mere 10 kilometers (about six miles) from them.

“As much as health is a human need, and food and water and shelter, socialization is also a human need,” she said. “I just want to hug my family.”

The risks presented to the frontline workers are only exacerbated by the exhaustion of the overworked and struggling healthcare workers.

“People just reached a point of burnout where they were willing to take risks that weren’t necessary,” said Martin.

This pandemic managed to make even the people working directly with covid patients feel horribly helpless.

Nicole Bernosky, a staff nurse at a Connecticut general practice, described watching several of her homeless and addicted patients slip through the cracks after her practice began seeing only the most acute, emergent patients in the clinic.

“This gentleman would go to our suboxone group every week and he was doing phenomenal,” Bernosky said of the patient battling a drug addiction.

“He was clean, his drug screens were clean for months. He was doing perfect,” Bernosky said. “I saw him come up for covid testing a few weeks ago and he looked terrible. I just felt so bad. I could almost guarantee that if we were open, he’d still be doing well.”

Telehealth and phone services are available in many practices, including Bernosky’s and Pendleton’s.

But the phone service seems to add more challenges to the healthcare professionals and their patients rather than relief.

“It’s so difficult because we need to walk someone through doing an exam on themselves,” Pendleton said. She said these tests are often performed incorrectly or inaccurately, defeating the purpose and often harming the clinician’s ability to help their patient.

If the conditions weren’t already taxing for the medical professionals fighting to keep the general public safe and healthy, these professionals have the added burden of dealing with covid-deniers.

“When I hear someone say that it is a hoax, it makes me so viscerally angry,” Martin said. “It’s basically calling me and my colleagues, who have been completely traumatized by this experience, liars.”

“One guy, I told him to wear a mask if he was going to come in, and he adamantly refused because of some conspiracy shenanigans,” she said. “But it sounded like he had a really legitimate problem. It was so unfortunate because I just couldn’t help him.”

But despite the despair brought on by the pandemic and its horrific impact on the working conditions of our medical professionals, there is some hope.

The psychiatric clinicians at Puchert’s hospital started a toll-free mental healthcare line for doctors and nurses. Families of patients have rallied to buy extra refrigerators for the workers’ lunches.

“As a healthcare worker, I’ve never felt so seen,” Puchert said. “We are human. We need hope.”