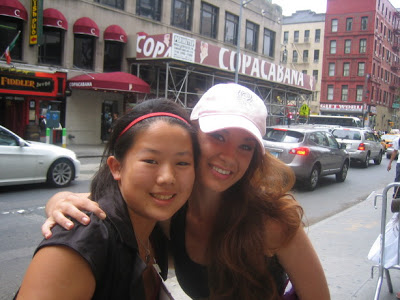 Youth Journalism International
NEW YORK, N.Y., U.S.A. – I had the good luck of being
able to make the trip to the Big Apple on Saturday to see the Tony Award-winning
show “Master Class.”
I’d like to say that I heard about “Master Class”
because of its previous stellar reviews and its riveting subject matter, but,
I’ll be honest. My interest was piqued because one of the cast members happened
to be my musical theater idol – the one and only Sierra Boggess.

For those of you unfamiliar with the theatrical
scene, I’ll give you a rundown of her career.

Boggess hails from Denver, Colorado where she
graduated from Milikin University with a BFA in musical theater. Her
professional debut was being cast as understudy Cosette in the American tour of
the critically acclaimed “Les Misérables” – pretty good for a first
professional part!
Before she hit 24, she’d landed roles in other
famous musicals, including Mable in “Pirates of Penzance;” Maria in “West Side
Story” and Charity in “Sweet Charity.”
But the big break that would catapult her into theater
stardom was yet to come.
The call came from the Venetian Hotel Resort and
Theatre in Las Vegas, where she would star as the beautiful young soprano,
Christine Daae in “Phantom: The Las Vegas Spectacular.”
This was a perfect opportunity for her to showcase
her breathtaking soprano. And, with the help of the Phantom, she like her
character, stepped forward into the limelight.
After a successful one-year stint in Las Vegas, the
dazzling lights of Broadway beckoned and in 2008, Boggess was cast in a stage
musical version of the much-loved, Disney movie, “Little Mermaid” to create the
iconic role of Ariel.
This show was to win her Broadway.com’s Audience
Award for Favorite Female Breakthrough Performance and three nominations for other
awards besides. If you’re thinking,  “So
she’s played two of the massively iconic roles and performed to critical and
public acclaim on a Broadway stage, fulfilling many a girl’s dream by getting
to be a Disney princess. Couldn’t get any better than that, right?”
Well, you’d be wrong.
In 2009, it was announced that Boggess was to return
to the role of Christine Daae in composer Andrew Lloyd Webber’s “Love Never
Dies,” the much anticipated sequel to “Phantom of the Opera” which was to open
at the Adelphi Theatre in London’s glittering West End.
Now Boggess didn’t have to go through the usual
casting process, oh no. She was specifically chosen for the role by Webber, who
had been wowed by her performance in Las Vegas. Hand-picked by Britain’s most
famous musical theatre maestro – now there’s something to put on the resume.
I was privileged to be able to see “Love Never Dies”
in London and let’s just say it wasn’t just the composer who was smitten with
her voice.
While on stage, she completely commands the
audience’s attention with her presence and stunningly beautiful voice.
The songs suited her perfectly, allowing her to really
wow the audience with her natural coloratura and effortless sounding voice ascending
to those high notes.
I was also very moved by the sheer emotional depth
she put into the performance. Clearly, the public and critics were impressed,
too. Every review sang her praises and she was nominated for Best Actress in a
Musical in the prestigious Olivier Awards, the theater world’s equivalent to
the Oscars.
Her trip across the pond massively expanded her base
of dedicated fans, making her one of London’s foremost leading ladies at the
time. If you haven’t heard Sierra on the “Love Never Dies” album, I can’t
suggest strongly enough that you check it out as soon as possible.
After leaving the show in March of this year,
Boggess returned to Broadway to perform alongside Tyne Daly in Terrence
McNally’s “Master Class,” a play based on the master classes that opera diva
Maria Callas used to give at The Juilliard School.
I couldn’t pass up this opportunity to see my
favorite actress perform. So, being a real fan, I made the trip all the way
across the Atlantic Ocean to show my support. Did I go to the stage door?  Of course.
I found it rather amusing that most of the other
fans at the door were mature adults or Tyne Daly groupies and there I was, clutching
the glittered card I had made for her, hoping to get a glimpse of the young and
beautiful soprano.
Though I’d actually met her twice before in London,
I was hit those times with a serious case of star-struck syndrome and was
unable to really say much to her.  This
time, I was a little more prepared!
I felt the familiar feeling of my heart skipping a
beat as my idol came out of the stage door.
Luckily, I was able to make my voice box work to get her attention. I’m
always struck by how different she is in real life from being on stage.
On stage, she always seems so awe inspiring and out
of reach, but in reality she’s a really friendly, down-to-earth person.
That’s one of the inspiring things about her. Despite
her impressive career and the accolades she’s received, Boggess is genuine and
kind, with no acquired pretentiousness. She gives her fans her full attention
when she’s speaking to them and has an inspirational “go get ’em” attitude. She
doesn’t seem to let other people’s criticism get her down.
Thankfully, she loved my card and rewarded me by
saying, “Thank you, it’s beautiful!” and giving me a big hug.  The main thought in my head was, Oh my God, I’m actually getting a hug from
Sierra Boggess.
She then took the time to talk to me about how much
fun she had had in “Love Never Dies.” When I mentioned I was coming to see her
perform in the “Phantom of the Opera” in London this fall, she said cheerily,
“Awesome, I’ll see you there!”

I feel so lucky. A lot of people whose idols are
people like Beyoncé or Keira Knightley will never get to meet them, but I’ve
had the privilege of getting to meet Sierra Boggess three times. Not many people
can say that about their favorite actress or singer.
For me, Boggess is an inspiration; she was the one
who made me realize that being on stage was what I really wanted to do.
She’s a phenomenal musical theater actress, moving
from playing a Little Mermaid who belts her songs to an elegant Christine Daae
whose extraordinary soprano captivates the audience.
I’m counting down the days before I can see her
perform in the “Phantom of the Opera” at the Royal Albert Hall in London to
celebrate the show’s 25th anniversary.
My favorite
show of all time, starring my favorite singer of all time – perfection!