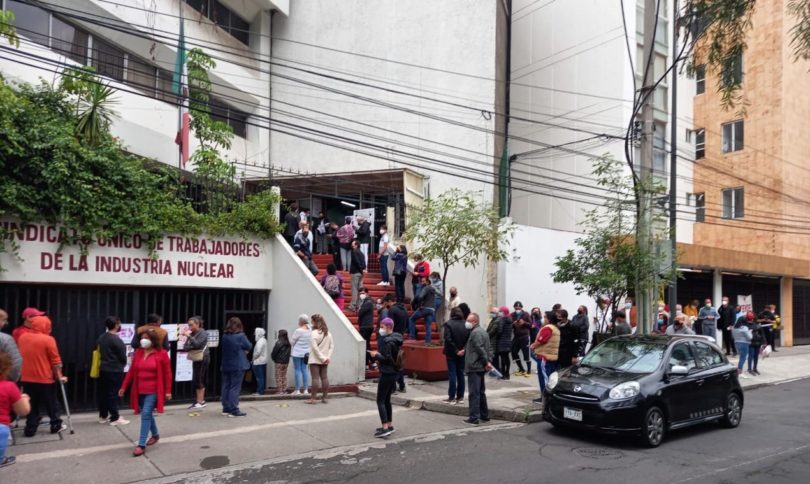 Mexicans lined up to vote about 9 a.m. in Mexico City during the June 6 election. (Regina López/YJI)

MEXICO CITY – What happens when an individual’s decision affects the destiny of a whole country?

In elections, citizens have the last word. This is the main principle of democracy.

Mexico is a country with a democratic government and every citizen has the right to vote.

But when your decision can determine the future of your country, don’t you feel pressured?

“Yes, of course,” said Valentina Cabrera, a 16-year-old high school student. “Every teenager I know is desperate to change the world, but we have to start with our country. We need to start, even if it’s just by a tiny piece.”

But Alejandro Gomez, a 26-year-old recent law graduate said, “Nobody put any pressure on me and my vote is free.”

Voting is free. When you vote, you are free to vote for whatever candidate or party on the ballot.

But when you vote, you are also free to not vote. In other words, you are free to not choose at all and leave your ballot empty.

“I think cancelling your vote is useless,” said Gomez. “According to our democratic system, that vote goes to whatever party has the most votes.”

Regina Campero, a 17-year-old student, said even if you cancel your vote as a form of protest, the people you want to see your message won’t even notice. The only people who will see are the people helping at the polling place, and they won’t even care.

But when you find yourself not knowing who to give your vote to – and don’t want to cancel your vote – how do you choose?

“You just try to choose the less worse,” Campero said. Something most people do, Campero said, is discard some parties and then look at the plans of the rest. But then, it gets more complicated because of the alliances between parties.

And it does get more complicated. Aside from governors, the other candidates elected in Mexico on June 6 were the members of the Chamber of Deputies and those members and their parties will determine the balance of power in the country’s legislative branch.

If three quarters of the deputies are in the same party, they can change the Mexican Constitution. Mexico’s power is divided into three branches of power: legislative, judicial and executive.

The executive power is commanded by the Morena Party, which is the party of Mexican President Andrés Manuel López Obrador. When asked what they would think if Morena won, many of those interviewed said they would be scared.

If Morena won, basically one party would be in charge of the country. Everyone interviewed disagreed with that idea. What they agreed on is that there always should be different ideas and every voice must be represented.

So what would be the best scenario to come out of the elections this month?

Campero said there’s no specific party that she would give her vote to – she just wants different ideas in the chamber.

While Gomez thinks the same way, he said, “I just don’t want the chamber to be represented mostly by Morena so they won’t be able to change the Constitution, because then the power will be given to just one person, the president.”

“I would love that there would be some variety,” Campero said, “but everyone just ended being divided.” She’s referring to how each party has their own public which is divided by class, a situation that the president encourages.

The news that Morena and the alliances don’t have enough representation in the chamber to change the constitution must be a relief to Mexicans who want a variety of ideas in government.

New ideas will be given the chance to be discussed so every group of people, no matter its socio-economic status, will be represented.