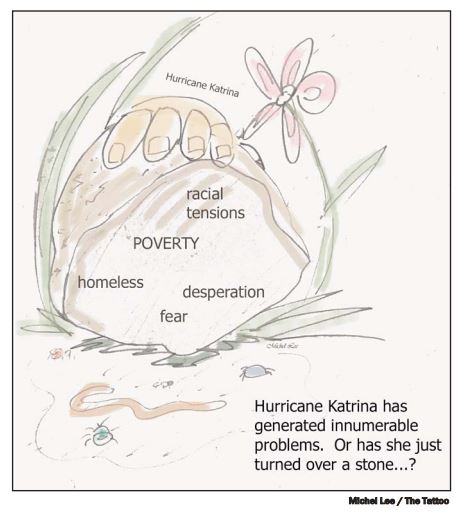 Tuesday, Jan. 17, 10:22 p.m., Ponchatoula, Louisiana —People’s stupidity continues to amaze me. Without fail, there is always someone who comes along and says the most unintelligent thing at the worst time imaginable.

And now, when New Orleans is divided, torn by people’s uncertainty about coming back and risking the flood once again, Mayor Ray Nagin stepped to the plate, swinging strikes the entire way.

In his speech on Martin Luther King Day, the mayor said, “I don’t care what people are saying Uptown or wherever they are. This city will be chocolate at the end of the day. … This city will be a majority African-American city. It’s the way God wants it to be.”

So much for American tolerance and equality.

His comments have outraged many New Orleans citizens, if outraged is even the word.

He suddenly lost the support of people who had previously respected him. Many white citizens of New Orleans are not returning to the city because of his comments.

The killer part of this is that he just did not stop!

Instead of spitting out one infuriating comment and stopping, he continued, stressing that New Orleans would be a “chocolate city” once again.

New Orleans was known for diversity, and it’s as if the mayor wants to wipe that wonderful culture away.

I did not live in the city itself, but I know and understand the history of the area: the Spanish influence, the French influence, the strong African American culture that gave us jazz. New Orleans was a city of mixing cultures, mixing history, and that is what made the Crescent City so magical.

Nagin’s speech undermined that entire concept of cultural exchange and shared history. His speech upset the balance that the city had for generations.

But life goes on, and — and despite the mayor’s speech — two things important happened to me today. First and foremost, I went to my first college class ever. Second, I realized that the new car smell in my car is quickly fading away. It’s almost gone.

I consider the second point important because it means that time really is moving forward. Sometimes, it’s easy to forget that and get lost in the stress and busyness of life like this.

But I sat down in my car today after school, and the happy smell wasn’t there to greet me. It was strange. The newness is gone. People naturally adjust and find a new ‘normal,’ and that’s what I’ve done.

I’m used to coming home after a day at this strange school and seeing the FEMA camper waiting for me. I’m used to sleeping on a sofa next to a space heater. I have adjusted to cold showers. This is what humans do. We adjust.

There’s a university in the same town as my new school, and they have a program where high school students can take classes and earn college credit. Since St. Thomas Aquinas, my post- Katrina high school, doesn’t offer the English class I had been taking before the hurricane, I decided to take one at the college. I tested out of a few levels, and so this afternoon, I walked into English 301. It’s a literature class, Beowulf to Paradise Lost.

They all stared at me — college juniors, college sophomores, graduate students — some old enough to be my parents. I was dressed in my high school uniform, so all the eyes on the room were locked onto my schoolgirl outfit.

Believe me, it was slightly unnerving. I gave a wave, and that snapped them out of their daze. They went back to talking amongst themselves.

I was nervous because it was new, but I know that I’ll adjust to it soon. It’s only natural that I do. And in time, people in general will adjust to the fact that the New Orleans after Hurricane Katrina will be far different from the New Orleans of before.

By the influences of the floodwaters and of the mayor himself, the city will be drastically different. The foundations of the mixed culture have been shaken by the forces of nature and the force of Nagin’s speech.

Still, everything shifts to a new normal eventually. As humans, we rationalize and adjust, and on Thursday, when I drive to the college and walk into the classroom, the newness will almost all be gone — just like the newness of a car.

Time helps us adjust, if only we let it, and then the strangeness of a life so different from the one we knew before — the life that I quite so bad.

Read the next #FleeingKatrina entry here.