EAST LONDON, Eastern Cape, South Africa — Set shortly after the abolition of apartheid and election of Nelson Mandela, Invictus follows the remarkable journey of South Africans as the new president uses the national rugby team to help reconcile his people.
With a screenplay by Anthony Peckham and Clint Eastwood directing, Invictus features Morgan Freeman in the role of Mandela and Matt Damon in the role of then-Springbok Rugby captain Francois Pienaar.
Set in the mid-1990s, the newly emancipated South Africa is hardly living in harmony, though the bloody backlash feared by many whites never occurred. 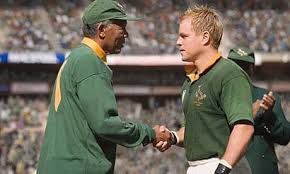 At the time, Springbok Rugby was synonymous with white supremacy and apartheid. It was common for resistance movements to support any team playing against the Springboks.
Despite the reformation of the country after Mandela’s release from prison and the beginning of a true democracy, this mindset continued.
Despite pressure to reform the colors, name and make-up of the team, Mandela decided that this team and the upcoming World Cup could bind the nation of South Africa together.
As a matter of interest, the film takes its title from a poem by William Ernest Henley that is said to be one of Mandela’s favorites.
The stanzas, “I am the master of my fate; / I am the captain of my soul” are repeatedly used by Pienaar.
This becomes significant not only in illustration of Mandela and Pienaar, but in illustration of the South African people and the decisions they must make.
The word is Latin for “unconquerable”, which is also a powerful means of emphasizing how South Africans and the national rugby team rose above their circumstances.
As a person with little affinity for rugby, I was apprehensive about watching Invictus.
Fortunately one soon realizes that the film is neither wholly about rugby nor wholly about Mandela. Their presence in the movie merely serves to tell the story.
It is not a tear-jerker, but the events ring true and I have not spoken to anyone that did not get goose bumps watching it. I was in tears within the first 15 minutes.
The value of the movie is not exclusive to South Africans.
While it may seem more relevant here, one cannot deny the global inspiration of Mandela.
The film displays factors not always considered by the rest of the world, including the fear and guilt of those white citizens who never agreed with apartheid policies as well as the reasons non-white citizens struggled to reconcile themselves with a new South Africa.
Invictus is certainly one of the better movies regarding South African history.
It has good acting and is of lighter tone than Cry Freedom (1987), a movie about Steve Biko and Apartheid which also received worldwide acclaim.
Do not wait for Invictus on DVD; it is worth the trip to the cinema.

Mariechen Puchert is a Senior Reporter from South Africa for Youth Journalism International.